CKEY:
Colorando
Admin’s CKEY:
sergeikoralev
Is this for both servers or just one? If so, which one:
MRP
Which server did the ban happen on?
Sage
Ban Type:
Appearance
Ban Length:
Perm
Ban Date (MM/DD/YYYY):
2021/07/09
Round ID:
31196
Ban Reason:
Refuses to come up with a lore friendly in character name.
Appeal Reason:
I never said “I refuse to change my name” I spit balled a couple of names and he just beaned me. Probably should not have spit balled two bad names in a row but I was literally coming up with them off the top of my head. I even asked him for some of his ideas but he just jumps to John Smith and bans me off appearance perm. This was after Robustu is not a roleplay friendly name. Also on a side note whats with being told to change your name and you do it and nothing comes of it but a year or two down the road some random admin you have never heard of just comes with "Gotta change your name , I don’t really care if another admin told you to change it and you did and they did not say anything about it. But hey fuck that I don’t like it so change it.
Additional Information:

Pastebin.com is the number one paste tool since 2002. Pastebin is a website where you can store text online for a set period of time.

Pastebin of the chat logs between us

Here is the ticket in a more reader-friendly format. 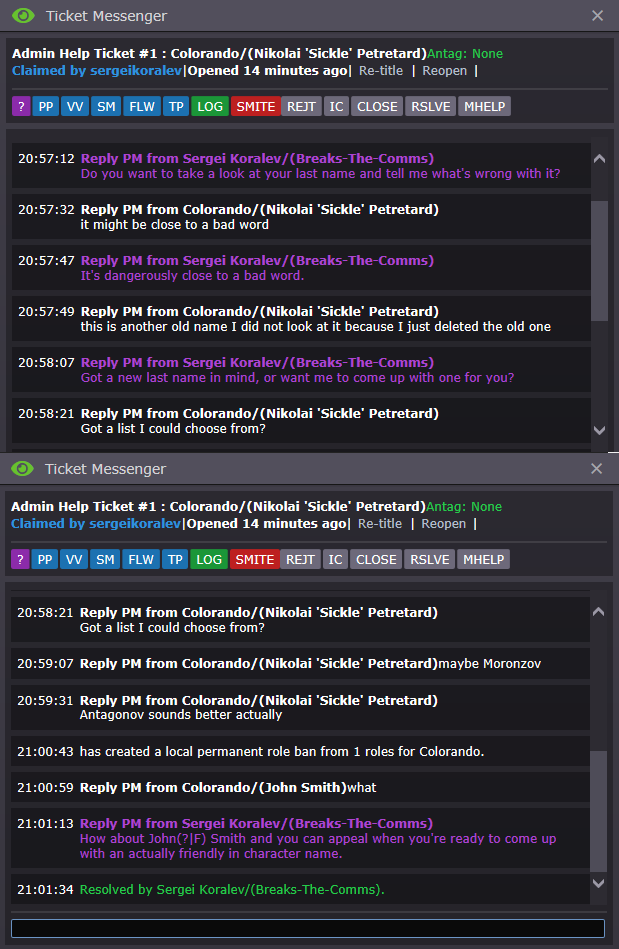 You started sending ideas, which is normally totally fine, with the exception that you obviously made no effort to actually honor the spirit of our naming guidelines. With that I decided that it wasn’t worth my time getting jerked around by someone who wasn’t taking me seriously, appearance banned you, changed your name to something acceptable, and moved on with my life.

So you were told to change from “Robustu” which was an obvious “robust” reference (OOC in IC). Then you showed up with a name that you claim was old, which is believable, that has a filtered word in it. And then when asked to change it you come up with “MORONzof” and “ANTAGonov”.

As for the other admin telling you your name was okay? Sure, we believe everyone who tells us that generic admin no. 46 told them that their behavior was acceptable. Get a name and a note that quite literally says “John Smith” is an acceptable name, and then we’ll likely defer to that admin’s discretion. It’s not that I don’t want to believe you, it’s just that the rest of the community and your note history make me a bit cynical about these sorts of things.

So, again here I ask what I’ve asked of you in the ban message. What is your name going to be?

Edit: If you need help coming up with last names or names in general there are thousands of different generators that are out there.

You’ve been warned about having a quoted nickname in the center of your name before as well.

Normal human names, the kind that won’t raise an eyebrow if you chose to name your child.

On second look actually - you’ve had more issues being warned and banned for names than just about anyone. I even failed to note you when I corrected “Charles “Robust” Autisma” and you have four other seperate instances.

I would hazard to say keeping a permanent appearance ban isn’t out of the question at this point. You’ve more than proven to have consistent and continued issues with picking good names for over a year.

I only recently came back to playing bee and the Nikolia name was an olllldddd name which I only put on because the previous one was being grudged against and it be time to bury him. I changed from “Charles “Robust” Autisma” because you asked and I did so even though I didn’t because I knew down the line that it would once again be forced to change because admins seem to all have different opinions on names. I choose edgy names because I like to have fun in a video game and im really not the only one because I see crazier names slide half the time any but that really doesn’t matter because admins just cherry pick when they want to enforce rules

I told you I would in the beginning

He’s asking you to suggest a name in here in the thread.

Charles Itilia ill go back to that old guy

Works for me. i’ll deal with this shortly.

Ban reason has been edited to contain the approved name and ban has been listed.