The Official Things That Make No Sense Thread

1: Breaking an pinboard makes it turn to metal and not wood.
2: Spessmen can breath pure O2 without brain damage
3: Kilo and Asteroid exist
4: For an top secret research station, there are a surprising number of people who not only know about it, but also know what its researching.
5: Plasma doesnt function like actual fucking Plasma.
6: Lavaland is stated to be an asteroid in many places but is talked about like an planet.
7: Somehow all the various xenobiological entities native to Lavaland can not only breath the atmosphere on SS13, but actually dont spread any alien viruses in the process.
8: Slimes…exist.
9: Despite the station being designated number 13, there are not 12 other stations in the cluster.
10: Computer Science has apparently regressed a lot in some areas while advancing tremendously in others. Case in point: PDAs are used over the advanced holograms NT actually has.
11: NT allows Illegal Tech to actually be available to the crew, thus allowing the crew to pay DonkSoft (An Company associated with the Syndicate.)
12: The idiot interns who rebuild SS13 apparently place the Smuggler’s Satchels too.
13: Satchels have more space than backpacks but leather satchels have more space than normal satchels and less than dufflebugs. But dufflebags do not have the most space of the normal storage items.
14: NT apparently employs Doomguy.
15: NT has the ability to wipe out any number of its opposing factions yet doesnt.
16: NT doesnt do background checks at all.
17: Central Command is fucking small compared to SS13.
18: SS13 has barely any living quarters.
19: For an station about researching plasma there is a surprising lack of plasma research.
And finally, 20: Whatever government runs Earth apparently does not give a shit about what NT does.

You know what? Fuck you. What really doesnt make sense is that you cant breathe pure o2 irl

This is a joke thread. Do not take it seriously.

Actually the amount of bluespace tech available to the crew is incomparable to the amount that NT actually possesses it seems. See: Hammerspace Bags, BSAs, Stormdrives, and Bluespace Emags.

Whatever government runs Earth apparently does not give a shit about what NT does.

didn’t read the lore did you

Oh, the lore! How could I have forgotten!
Anything but that, no!

akshually according to lore the planet earth was kinda screwed amd thats why everyone went to space. and then some huge race war or whatever where humanity beat up lizards and moths but on a galactic scale, and then ??? i forgot, and then huge, universal megagovernment forms which had a bunch of huge bluespace gateways or something. a couple of people go through it to a fringe galaxy, gateway breaks, and over time they formed nanotracen, the syndicate, etc etc. if i’m reading lore correctly the megacorporations we know and love are tiny in the grand scheme of things, simply refusing to repair the gateways and get back in contact with the gigantic universal order and instead fuck around in a small galaxy or something.

/tg/ lore is absurd and not comparable to Bee lore.

Goon lore is also absurd. As its Yogs.

Aurora and Bay lore are so fucking dense that even i cant get through all of it. And i have read basically everything related to Tolkien.

Lifeweb lore is basically just the dark ages in space.

Also /tg/'s lore is apparently in their library and not their wiki.

Thankfully, i have a direct link to all of /tg/'s library thanks to Franc.

Also, from the Beestation wiki on the Lore Page:

All these are lies.

idk i just pulled off the beestation wiki page 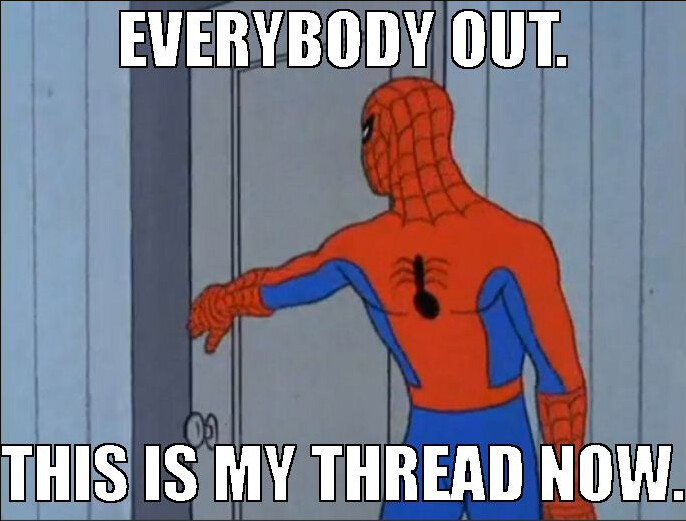 No. Fuck you. This is my thread. Dont make me split it off into an Spiderman thread and an Lore discussion thread.

Reeeeeeeeeee this thread is pointless so far.