The Daleks. A antag race frozen in time on an asteroid

I’ll start first by saying that I have VERY little experience with ss13 code, or code in general. But I am getting the hang of it and I want to learn. I have already made some sprites, but havin a few issues with DM.
And I really wanna make this, as I am a big fan of the old Doctor Who, and I think it would fit in well.
We need more megalomaniac creatures. RP is the main goal of this, instead of a Xeno like race that just comes and wipes the station off the map, the Daleks would prefer to take control and have slaves.

So, the idea, is as follows:
A ghost spawn race on an asteroid, the Daleks have a semi-functioning station, which has a small power generation system, along with some atmosphere of some kind.

Essentially the Daleks are cyborgs and can be made like them [can only be made by other daleks], but they are much more limited in movement, are quite slow, only have one “hand” [a suction cup], run out of power fast if they aren’t on static powered tiles, but have very powerful guns.
Inside they are an organic, headcrab like thing, but are very slow and fragile, and will slowly die whilst outside of a Dalek shell.

The Daleks are commanded by Davros, An old human in a Dalek “wheelchair”, who is paralyzed and can’t get out of the wheelchair, with only one hand.

I am thinking it could be a similar role to the golems on lavaland.
Except the Daleks are hostile, have a leader and [maybe] have a shuttle that is in need of major repair and slow.

So what do you lot think of the idea? Would you like to see or play em?
It would be a long project. But I am enthusiastic about doing it.
I have already made some sprites, the completed Dalek and Davros, just need to figure out all the jargon and where the hell everything goes in the files. And the other required sprites too of course.

Advice and suggestions are welcome

I feel like the main problem with this, ignoring the actual mechanics, is just copyright. Yes, we have xenomorphs, but I’m pretty sure CM threw hands about that already. Crossedfall is so against having copyrighted material in the game when we introduced Roombas we had to rename them Larry’s since the word Roomba is copywritten. However, with just a bit of reskinning, that can be resolved.

Beyond that, it’s also a major design transgression to have roundstart ghost roles that actually affect the station. I have no idea why, particularly, but I think the major fear is that people will just use them as a second chance to come back and dunk on the guy that killed them. I’ve seen it a couple of times myself, with the lavaland doctor and such. Making them a spawning midround like xenos or pirates alleviates this, but is again another change.

The core idea of an antagonist that wants to take control rather than simply murdering everyone is also rather difficult. The rules forbid cooperating with antagonists at all (a rule I’ll admit to breaking on occasion) so the line of where surrendering and begrudgingly cooperating ends and outright self-antag begins is basically entirely exclusionary of the former. The daleks can’t get many slaves if the server rules themselves enforce a death before slavery mindset.

Mechanically, slow but powerful doesn’t tend to work out very well. The strongest abilities in the game are those that make you faster, because those make you harder to click on for the enemy. That said, Daleks as described sound very easy to click on and, with a slow but heavy hitting gun, would need perfect accuracy to win any fight. Calling them cyborgs also indicates a vulnerability to flashes, which is probably a bad idea given how easy they are to mass produce. The powerful, mechanical overlords of the station are a lot crappier when any greytider can grab a flash from robotics, stunlock one, and rip them apart.

It should be noted that the optimal solution for this (from a dalek point of view) is to get a slave to craft a scooter and then ride it around. This mental image is funny enough that keeping this in is considerable.

Hmm, yes, I have to say I agree with pretty much all of yer points. I didn’t think about the copyright part.
I wasn’t callen em cyborgs though, that was just more of an example of a machine that can be built and player controlled.
And yeah, people metagrudgin is one of the reason I wanted em slower and not over powered. Midround was what I was thinking, and maybe not have em able/allowed to get to the station, or just have them murderbone.

When it boils down to it, gettin people to RP em properly would probably not work well. As the Daleks [and me] are more of monologue first, then attack. And lotsa people would probably like to just attack first.
As for the guns, they are more like an area flash then a laser gun, washing over the person in that direction with high powered rays to fry internal organs
And the slaves, It probably wouldn’t quite work out even if it didn’t break the rules, due to the aforementioned greytiders, and how the slaves would even be useful.

I think I’ll continue to make it, and have the dalek version for my own personal enjoyment and coding experience, and use the concepts from it to make something similar to get in game.
An asteroid station based ghost spawn was the main inspiration for this, so I’ll probably develop that Idea instead, and come up with some original, megalomaniacal machines to inhabit it.

Thanks fer yer advice! To the drawing book!

To the drawing book you go, and I wish you the best of luck.

A very cool idea that sadly is ultimately yet another ghost spawn that no one will actually use. Just look at podpeople, golems, beach bums, etc. There must be some way to interact with the crew (comms agents, or ashwalkers because they fight miners a lot) or it’s going to be boring for most players.

Well, I play as golems and pod people often. I do not think there needs to be much interaction with the crew, as most of the time people will use it for hostile actions, and just havin another station of a race doin their own thing separate from the station is something I find is pretty neat idea.

Alrighty, hadn’t had much time recently to work on it, but I made a sketch of my original meglomaniac machines, the name is subject to change, feel free to tell me of a better name as I am awful with names. They aren’t toasters I swear 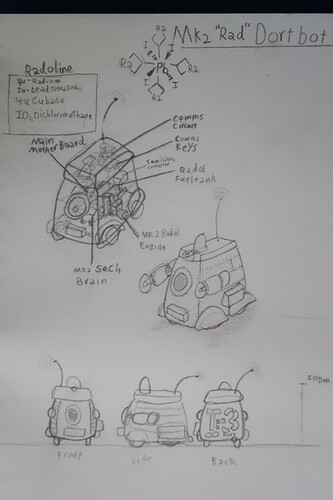 IMG_82211920×2880 169 KB
I also whipped up a special fuel for them too, a di-organometallic compound called Radoline, featuring those square molecules I love so much.
the DCM is a catalyst in the reaction, as catalysts are closest thing there is to having a solvent based reaction, with a isolation step afterwards. Yes I want chemistry to be realistic and difficult
The construction of these machines will be similar in difficulty to a high tier mech.

As for the backstory, ahem…
Many years ago, a Head of Security, fired from NT for corruption and abuse of power, secludes themselves to a derelict station from the early 2300’s, and rebuilds the outdated security robots using the knowledge from classified papers he stole before his court martial and subsequent exile. As his sanity disappears and his spite for NT and the officials that had exiled him, he outfits the robots with weapons of destruction, to fulfill his twisted version of galactic order.

Powered by a Mk2 Radoline combustion engine, produced in 2370 by Radtech, these engines are highly efficient at squeezing as much energy out of the combustion reaction as possible, with a side product of producing small amounts of radioactive gasses and lead during operation. Most of the gasses are scrubbed by a filter before it leaves the exhaust, the filter does require replacing every now and then, after around 3 hours of constant runtime, along with an oil change.
I got so many more ideas that I had thought up but I don’t quite remember em currently.