CKEY: Terrachan
Admin’s CKEY: oo7craigmc
Ban Type: idk
Ban Length: Never
Ban Date 2022-07-21 07:24:54
Round ID: 39,413
Ban Reason: “accused of ban evasion”
Appeal Reason:** never did anything wrong and just got randomly banned at the start of a round after being asked a ton of personal questions. if i did anything wrong im sorry im just trying to learn how to play this game

You just so happened to create an account with the name ‘Terrachan’ on the exact same day the very similarly named account ‘Terrabun’ got permanently banned. And that also any possible connection between the two of you is due to you using a public computer?

Honestly this is just sad. You’re either still lying or you are the victim of a whole bunch of different, unlikely coincidences.
I’m still betting on the former, though. 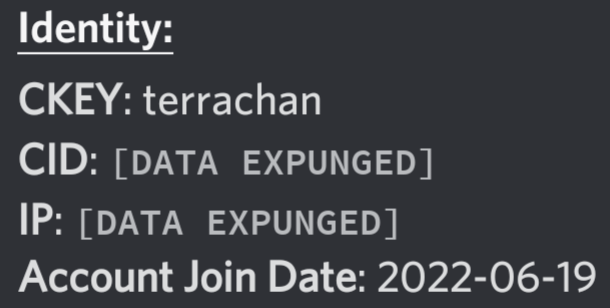 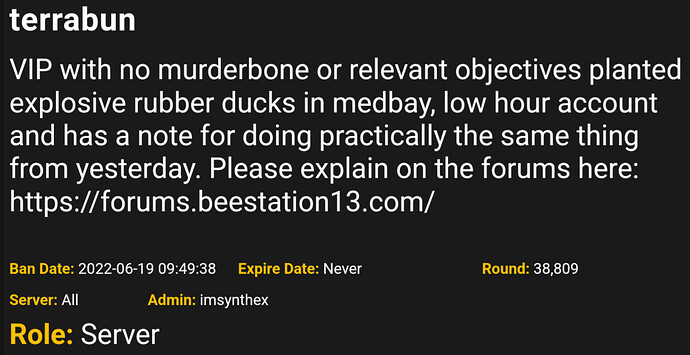 This was an appeal-on-the-forums style ban.
If you’d just appealed it, it would have probably have been reduced to just an antag ban.

This is a great example of why if you truely aren’t just a griefer, you really should be honest with the admins who bwoink you.
My original intention was that I was going to let you finish the round because you had rolled traitor and then have you appeal your original account’s ban here.
It’s sad to see people digging themselves into a hole.

Unless any other staff hold a different opinion, I think this appeal should be denied.

As an aside, I actually remember this initial incident.
I was playing that round and was someone who stepped on one of the ducks.
While I was dead I decided to observe and do some adminning and saw that there weren’t any murderbone objectives. Since I was involved I had to AHelp it instead of dealing with it myself.