Is this for both servers or just one? If so, which one: All of them, apparently

Ban Reason: Fail RP as AI. Kept using verbal announcements to remind people to “clean their asses to be more efficient” and some other lewd jokes that made people uncomfortable after a law change that stated that laughing was valuable. Kept justifying themselves that “humor is subjective”. Take 3 days off to read our rules and be a better roleplayer.

Appeal Reason: I said that the crew needed to report to medical for an ass inspection and to clean their ass at the start of the round once (Not repeatedly like the ban says.) because having a dirty ass is bad for efficiency. I was not contacted about my announcements at that time.Then I made two other announcements at the end of the round saying that I wanted a lusty queen to pee in my whiskey after getting a law that said I had to make people laugh. I didn’t try to engage in any erotic roleplaying nor elicit any kind of sexual response from anyone. I don’t see how following my laws is fail RP and it seems like the mod that banned me just didn’t appreciate my humour.

Additional Information: Ass inspection is a classic SS13 AI meme across every server I’ve been to and I played out the entire round with no complaints otherwise. I don’t see why this is a 3 day ban when I have had no other infractions.

As I already said over the ticket: humor might be subjective, but our rules are not.

This was a deserved ban, in my opinion.

Fail RP, as stated in the ban reason.

I don’t understand where the fail RP was though? You just didn’t like what I said.

Most of the crew didn’t like what you said.

This was Fail RP as in the AI shouldn’t be citing a “classic SS13 AI meme” in our server, nor doing lewd jokes that make people uncomfortable. You got the laugh law and went directly into lewd joke territory with no need, for example:

I don’t think this is acceptable roleplaying, and I’m not alone on this.

It doesn’t say anywhere that I couldn’t say lewd things. If the law said I had to stay away from blue comedy then I wouldn’t have said anything. Why even have those words available? Why can’t the AI make crass jokes when they have a law that says to make people laugh? That seems like a needless addendum.

i thought it was a common sense to not make a lewd joke to strangers. (and there are more suitable colorful server if you really want to make lewd joke without risk getting banned)

I’ve seen worse things said over the radio so I don’t know why the AI vox system is restricted here. Of course I don’t have logs for them because why would I just keep that kinda thing around?
The wiki page even has another classic AI vox announcement, in fact it tells you to annoy the crew with chants of “ass blast USA”. How is that any more or less lewd than telling people to clean their asses?

That page is not moderated, so it can’t be brought up in policy matters. However, I do believe it should be updated to be more aligned with our rules.

Yeah, maybe you should update your wiki on how to play the game to reflect on how you actually want the game to be played so when people follow suit they don’t get banned?

Can’t argue with that, but I do suggest you check for below to confirm if something in the wiki can be used for policy or not:

The pages that aren’t moderated should say that they can’t be referenced, then. I haven’t looked at every page of the wiki to know that was even a warning.

I grabbed that image from the rules page, so it kinda shows you didn’t bother to go over them.

I literally posted something from the rules on this page, so it kinda shows you didn’t bother reading my posts

The pages that aren’t moderated should say that they can’t be referenced, then 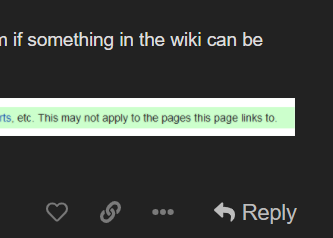 Protip for appeals: don’t be argumentative and stay humble.

It’s abundantly obvious that you’ve learned little to nothing from this engagement. I think it’d be best if you took the time to go over our roleplay rules to get a better idea of what our expectations are.

This appeal is accordingly denied.