How long have you been playing ss13?: since about early 2020, most of which being on beestation

Who vouches for your experience (if anyone)?: I dont have anyone specific but i’m sure a few people would be willing to

Game Experience (More Detailed):
My hours are admittedly a bit pants in the some of the more mentor specific jobs like engie, viro, botany, etc but i know the basics of em all from browsing the wiki religiously and watchin em do bounty shit for me. Plus I’m intending on playing em a bit more since i’m gettin a bit burnt out on cargo (200h in cargo will do that to a man) so i’ll probably learn pretty soon. 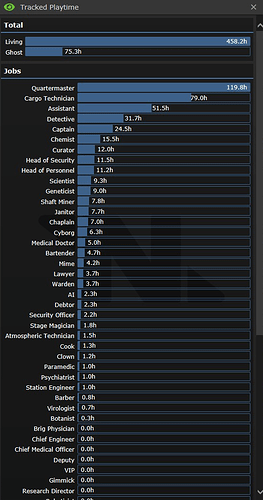 ah a metafriend +1 looks like you got potential, I’ll give ya a ± when I see your answers to questions as I don’t know of any to ask

1: Best way to cool down a room?
2: Room is spaced, how fix?
3: What air alarm mode do you use to purge toxic gases?
4: How make Tritium?
5: As an AI, how do i talk to my borgs?
6: AI Malf, what do?
7: A borg has gone rogue and is no longer synced, how do you fix it without killing it?
8: How setup Tesla/Singulo?
9: How do i open the fireaxe container thing without breaking the glass?

How to set up singularity engine?

Alright, grab yerself a hardsuit (Ideally with some good rad resistance, but we must all suffer for our art so if you cant get any thats probably somewhat fine but be sure to have some anti-rad meds), internals, a nice and full toolbelt, a good few cables, a handful of plasma tanks, a pair of meson/engie goggles and a dream!
Now, get a singulo container (Either from secure storage or ask your local cargonians very nicely for a crate) and place it in the middle of the soon-to-be giant radiation ball zone. Then pull out the rad collectors from secure storage and wrench them all down a bit outside where you intend to place the field generator but close enough to soak up all that juicy radiation. Shove those plasma tanks into the rad collectors and switch em on.
Now that’s done, start placing emitters around the ball zone and start connecting them to the pre-existing power with wires so that they can be powered up and then switch them on. Then place at least 4 field generators in a decently sized square around where you intend to have the giant irradiated ball of death hanging around and wire them up the same way you did the emitters, if these are broken or dysfunctional the singulo will be freed and lord singuloth will proceed to cause mass death with very few survivors and you’ll likely be banned… so make sure that doesnt happen!
Now start settin up the Particle Accelerator by wrenching down the parts, putting wires in them all and then using a screwdriver on em. If you’ve followed my incredibly vague instructions right it should ideally look like this:

and then click scan for parts to link the console with the rest of the accelerator, then set the output to 2 then FIRE IT UP BABY!!!
now all ya gotta do is babysit it until the death ball reaches around a 3x3 size then turn the output down to 0. Congratulations, you have made a singulo! Keep an eye on it every now and again to make sure nothings broken because if it escapes the crew are gonna kill you if the ball doesnt get to you first.

When you try to clone a body cloner returns “Subject’s DNA is beyond repair”, what caused this? possible treatments?

Seems the body has been husked, if it’s from space or heat or whatever you can just scoop out the brain and shove that in the cloner. But if that doesn’t work or it was husked by a ling, then things get a little bit more difficult. You can always try getting some blood out of the corpse and ask botany to turn em into a podperson

How do you make renaming potions?

Xenobio ain’t my strongest area, I’m pretty sure its a light pink slime extract with water injected into it but I’m probably wrong.

How can you create a necropolis chest using virology?

Admittedly, I got no clue. I don’t particularly know much more than the basics for viro since I’ve been puttin off playin it more (I wasn’t even aware you could get a necropolis chest from viro?). It’s on the to do list though, so I’ll prolly figure it out… soon-ish.

Which botany plant has the highest reagent capacity?

Botany is a magical magical place, but I’m wildly inexperienced in it aside from mass wood farms for that coffin money or watching botanists work their magic for some cargo bounties. I’ll probably find out once I get around to playing it some more and maybe asking someone whos pretty good at botany to gift their wisdom upon me.

2/5 is, uh, not the ideal score but I’m gonna hope my sheer charisma has won everyone over.

Repair breaches, open oxy tank or set the air alarm to refill and then pray for the best

I’m like, pretty sure its draught? Or panic syphon if inhaling that shit would like, kill you instantly and you need it gone now

At least you recognize the value of draught. Yes.

I’m pretty sure it’s from heatin up plasma but that’s not really my area of expertise.

use .b to talk on binary channel. Quite good since it doesn’t need Tcomms as far as I’m aware.

It doesnt thankfully. But most of the time people just use :b too.

I dunno, I’m not the best at dealing with antags. I’d probably make a second AI and have them shut off the APC in AIs sat and try and undo the malf AIs damages whilst I go in to either card or smash the AI.

Either flash it and take off the panel(?) or shut it down from RDs console if you wanna take yer time. Honestly, dont really know from there. It aint somethin i need to do often.

Learn too. Might become necessary. Good for fucking over syndies.

Use a multitool on it

Honestly wouldn’t consider making a second AI too expensive a solution, Ive done it a couple times because “Cargo AI Funny” and it wasn’t much of a resource sink, especially considering the other option is dying in the inevitable borg and plasmaflood shitshow of a malf AI.

Its expensive because you need a brain.

One man can suffer for the prosperity of the rest of the crew. It is a worthy cause

At least you recognize the value of draught. Yes.

Nobody says contaminated
literally nobody
mentor purge when

Nobody says contaminated
literally nobody
mentor purge when

In the last half a dozen or so apps. The response to my question about that was contaminated or spacing.

Congratulations, you have made a singulo!

Seems the body has been husked, if it’s from space or heat or whatever you can just scoop out the brain and shove that in the cloner.

it was husked by a ling, then things get a little bit more difficult.

Yeah but how you fix it

Xenobio ain’t my strongest area, I’m pretty sure its a light pink slime extract with water injected into it but I’m probably wrong.

Admittedly, I got no clue. I don’t particularly know much more than the basics for viro since I’ve been puttin off playin it more (I wasn’t even aware you could get a necropolis chest from viro?). It’s on the to do list though, so I’ll prolly figure it out… soon-ish.

Botany is a magical magical place

In general, your knowledge is lacking but if you actually fill up the gaps you will be a good mentor
+1 from me

That is a dead man. He is dead. There’s a million ways you could die on the hellhole that is SS13 so I’m just gonna go ahead and decide he was killed by a bomb placed in Dorms 4 by admemes after the man got a bit too close with the Felinid Secoff. At this point we have two options (ignoring “let the cat fucker stay dead for his sins” as an option) which are to reattach/replace any lost limbs and use meds to heal any damage (likely burn/brute if its an explosion if Im not mistaken) and then to attempt a defib. And if that doesnt work/they’re too damaged for it to be worth it/It’s been too long to defib you can just clone them.

The medhud showing a skull icon means they’ve passed their defib timer. I was asking how and why this happened. (Dead for long enough for the timer to pass/feigned death)

Just dumping the contents into a beaker or using a syringe should work as far as Im aware.

Scoop out the brain for cloning or extract blood and make a podperson at botany.

alternative: Reduce burn to <50 and apply 100u synthflesh or 5u rezadone

Fire alarms have coloured circles that change depending on the alert level.

Honestly, Xeno is not my strongest area. I would just… suffer.

injecting plasma into a grey slime core spawns a grey slime. You can duplicate slimes this way.

Inject unstable mutagen into the plant.

Was going to ask some questions, but I can base my opinion off the current answers.
+1

I will never accept that it is because it isnt.

Albeit it may take literal hours in some cases.