Howdy. Share some anecdotes of stuff you saw in different events that admins hosted.

What weird fuckin’ memorable shit did ya see or experience?

Well, you already mentioned me dabbing on the death squad, so I’ll just go over some different ones.

No one expects stealth builds in SSB. Running around with an e bow and chameleon projector got me three kills, and decent loot, before I accidentally stepped into an emagged grinder. I was about to robust good boy as well, but he ran off before I could slip him.

There was this one guy in a round on kilostation (forgot his name) who turned almost everyone into shades during a dynamic round. Shades were everywhere, it was like a zombie apocalypse.

I didn’t see it, but it’s funny to imagine the chaos that ensued when bastion tried to do carp ops. They all either killed eachother, or they got killed by the turrets, since they don’t have syndie implants. The last syndicate guy just tried to break into my AI sat (I was PROTEUS at this time). I stunned and killed him, and the round ended.

pizza operatives got them fucking stacks 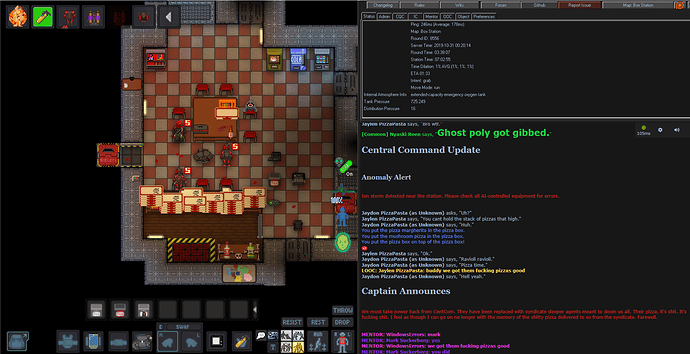 I learned that pAI could be antagonists, yet no one has been able to set pAI antagonist status since.

Also the pizza ops round was really fun.

Do you think God stays in heaven because he too lives in fear of what he’s created?

Just to clarify, mule bots can only hurt you if you’re on the floor, right? They can’t attack you with melee, or have any way to actually knock you down themselves, right?

Only if you’re down

and it hurts a fuckin’ lot.

there is no escape for you

I didn’t know mulebots could drag. Interesting. But yeah, what rue said. Or, just make an obscenely easy and cheap to make EMP grenade. Takes minimal effort to pull that off, just the ORM, some beakers, and the holodeck.

Using an antag token to be a slaughter demon during cult round and eating their sacrifice target four times in a row was pretty funny.