Aight gamers. I’m here to tell you about that pitch black void known as “Space”.

Which is also part of the game’s title. Yet people rarely experiment with it.

And which many people just tend to ignore and think of it as PUBG’s blue zone or “hehe can’t catch me” area rather than it’s whole thing.

So, space. That bitch.

Parte One; Space is Odd (Z-levels)

This means that you will leave behind the station, which means you stop being in range of AI, Tcomms and pretty much anything that doesn’t work across Z-levels.

However, some space ruins (more on that later) have their own TComms array set up to allow communication with the station.

But now the bitch part.

Parte dois: BUT RUE, I ENDED UP BACK ON THE STATION IN 2 MINUTES :CCCC

Here’s the thing:
Z-levels can loop.

Literally, don’t you ever wondered where that disabler shot goes? Or why did the station get hit by a random oxygen canister? Or how did a body that you spaced in evac ended up in fucking arrivals? They can and will loop at some point.

Example: You have Z-levels 1 through ~13 if i remember correctly.
1 Is Centcom.
2 is the station.
5 is Lavaland.
13? is when a shuttle travels, be it the Syndicate one, Escape shuttle, Arrivals shuttle, Mining shuttle. They all travel in 13.

This leaves us Z-levels 3,4 and 6 thru 12 to travel around.
Which means you have limited spaces.

So let me try and sketch out something real quick using my superb Paint skills to explain in a more visual way how Z-levels can look like in a random SS13 round. 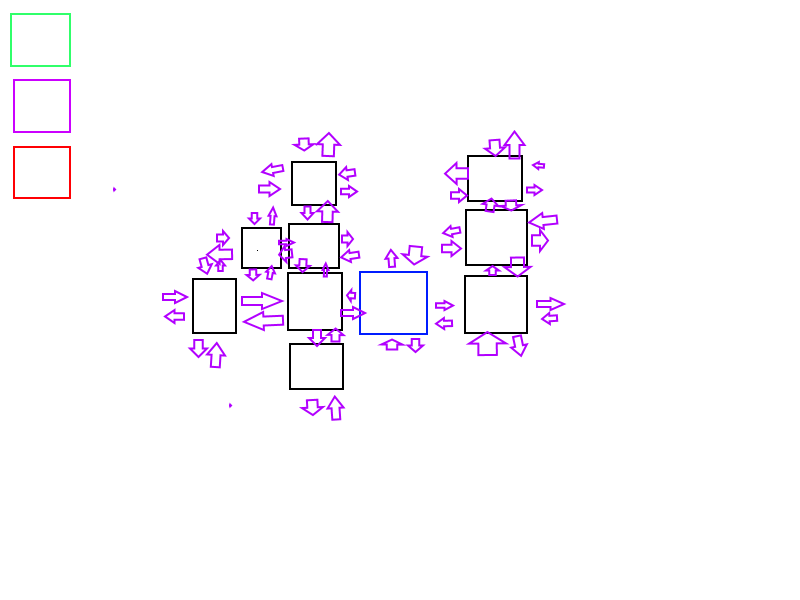 AS YOU CAN SEE, ON THIS PROFESSIONALLY MADE DRAWING:
Green is CC
Red is Lavaland
Purple is hyperspace/shuttles travelling

Station’s Z-level is the blue square.
The rest of the (random) Z-levels are the black ones.
The purple arrows point out how they work.
Some are not even connected via X, but they may be connected by Y.
You may jump from 4 to 11 and then go back to 4.
You may go from 4 to 7 to 8 and then back to 4. Maybe 7 and 8 loop X wise but 4 doesn’t.
You may just CONSTANTLY LOOP on a Z-level, like the Station’s Y in this case: nothing above it and nothing below it.
Some will make you have to backtrack because they lead nowhere.
Some will literally make you get lost.

The two things that are a must, is a jetpack and a GPS. Jetpacks help you move around Z-levels very easily. If you can, bring a big ass oxygen canister (notice how I didn’t say tank, CANISTER. Ask Atmos for one*) for both fuel and internals.
GPS, on the other hand, *help you know when the fuck you just crashed into the same Z-level for the 18th time and your shitty emergency oxygen tank is already about to fucking die. Furthermore, some space ruins have their unique GPS signal on space, much like Lavaland bosses.

Which brings up my next point:

Ah yes, space ruins.
Everyone loves to come across one.
But no one actually puts effort in diving into space and looking for them. That’s a fact. A big fat fucking fact.

What are space ruins? Literally the same as that random shit you come across space. You got some very cool stuff like:

There are many more, and a lot of them cannot be tracked by a GPS, which incentivizes blind search (or just tossing GPSs into deep space and PRAYING TO GOD THEY HIT SOMETHING.

This may be further updated, maybe not. Unsure. But it’s some basic stuff that clears even more basic stuff, hopefully.

M8 you lost your oportunity to say byond, im going to sue you for not making haha you casual

Hilberts hotel was a pain, but it was so worth it when we all got in, and mark was the bartender.

Also, real gamers go to the syndie outpost just to hit the self destruct button.

Also, agreed with the storm teooper thing. Had to self revive three times as ling to kill him.

tbh the only reason to explore space is this ruin:
The Totally Ordinary Space Tile. It is totally ordinary and there is NOT I repeat NOT a Pulse Rifle hidden under it.

These syndie troopers & pirates were pain in the ass… They killed me countless times. Also you can just simply have a normal oxygen tank that can be found on fire lockers or tank storages. As a scientist, i get EVA access, grab a CO2 canister from toxins then go to exploring. Also having a KA from aux base is useful.