CKEY:
Space_boi420
Admin’s CKEY:
Burza
Ban Type:
permanent
Ban Length:
permanent
Ban Date (YYYY/MM/DD/):
2022-01-17
Round ID:
30308
Ban Reason:
Filter bypass. Released Plasma in chemistry during an altercation where they were tresspassing. disconnected during ticket.
Appeal Reason:
it has been almost a year since i did this so i might not remember the exact details, i dont really remember what i said to get the filter bypass to be honest i assume it was the r-word and i understand now i shouldent say that, i understand that it looked like i was intentionally griefing but i made a really stupid mistake insted not realizing that if i made smoke while plasma was in the chem dispenser that it would make plasma smoke, i understand what i did wrong my playstyle has changed since then and i wont make the same mistakes i did before, about leaving during admin ticket i dont really know why i did this maybe i thought the admin was done but im not really sure i’ll be extra carful to make sure the admin is done talking with me if im unbanned
Additional Information:
this is my second time trying to appeal after almost a year

This ban will be eligible for appeal in two days.
I think this is close enough to the deadline.

You will also require a vouch from another server that you’ve been playing on where an admin can say something along the lines of, “Yeah, they’re a good player that hasn’t been causing us issues.”
The vouch is required and the ban appeal will not be considered without it.

Its pretty sad though - the original ban was only permanent since you disconected during the ticket. This could have been handled as an “appeal on the forums” type permaban, with you getting unbanned as soon as you’ve explained yourself. Had you not abandoned that appeal, that is. 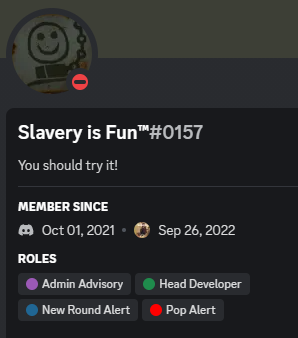 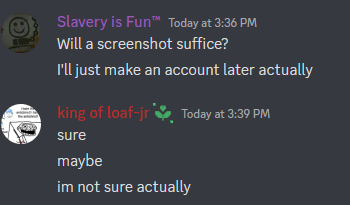 < incase your wonder why i only sent screenshots

discord invite to the discord server,to prove my vouch is real

You should probably get a vouch from a more reputable server. 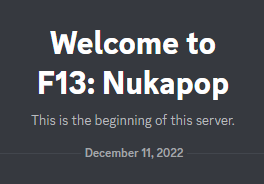 Server has barely been around for a month, has had negligible uptime and almost no staff to enforce the rules even while they are up.

You also have almost no playtime there.

From my experience anyway.
You’ll probably need a decent amount of playtime on a reputable server for them to vouch for you.

would monke station be reputable enough? because there my only other hope to get this vouch