Incident Description:
I (tideman) get HoP to agree to grant me maint access so I can kill rats, and gather Greyman gear TM, by which I mean the OG gasmask. Some time later security officer wearing full riot armor and weapons follows me around, few mins later I enter maint. Having him still following me I decide to pull the same prank I pulled on before during this round on AI, the good old foamblade into maint joke. We run around for few seconds, he corners me, bolas me which I’m 100% fine with. I drop the foamblade, showing to him that it’s was all just a prank. He apparently gets salty about it or something, because instead of doing anything else, he whips out billyclub despite having stunbaton and beats me with it until my whole screen gets while (to those that don’t know, it means one more hit and I’d die). Then he drags me to med, heals me, and brigs me for 15 minutes, which both warden and me agree is too much. As he brigs me, he steals the stuff from my backpack, like soap (which i never used), radio, and my full toolbelt which i paid for myself. He then continues running around the station searching for le valid, wearing full riot suit, shield, shotgun, etc. 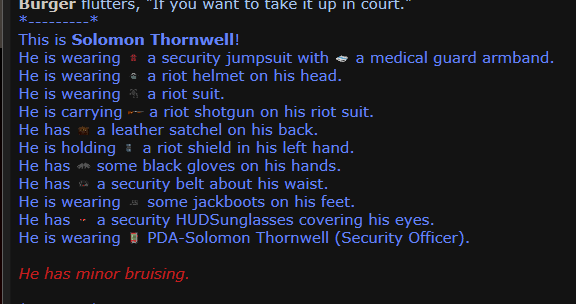 Yes I’m very salty. Space Law rework was supposed to end days of shitsec, instead it allows them to interpret the laws however they want and brig people for no crimes.

More pictures to come, I’m going to sleep for now

might wanna hide it, since still ongoing im going to sleep now

I spotted you hacking a maintenance door pressumably breaking in and followed you to confront you about it. Then you pulled out an armblade and said “what now ?” pressumably challenging me to a combat and started running around in combat manner. If i only realised armblade was fake when i managed to crit you is on you. You acted like an antagonist and brough this on yourself

So why would you continue to beat them past critical and brig them.

I like your logic
He antag? → Kill antag → He not antag? → Continue beating and brig.
Cool my dude. Plus taking their belonings. Cherry on top. Really. It doesn’t make you look bad at all. Trust me, you seem like a nice guy thanks to that.

And still ran around in riot gear looking for valids

On green this is inexcusable, but if there were revs running around and half of command was dead it’d be more tolerable. I dont see any mention from either player about what alert level it was or what threats the station was facing.

We ended the round on blue, I don’t know when it was changed. All I know command was all good, no antags were boning.

You knew it was fake before you managed to crit me, I dropped it right in front of you. Also I’ve never attacked you so you had no reason to to keep beating me till whitescreen.

Why were you using billy club instead of stun baton anyways? Looks like you just wanted to crit people and avoid responsibility.

“what now ?” pressumably challenging me to a combat and started running around in combat manner.

You mean by this is, I kept running circles around you, trying to get enough to open doors to hallway not attacking you. Hmmm sounds like ling to me. Then after get bola’d by you, I drop the armblade yet you beat me almost to death. Curious.

I stoped beating them as soon as i realised armblade was fake. They dropped it below themselves(You can even see on the screenshot player provided how its covered by their body) and you cannot reasonably expect me to notice it right away in middle of combat. They were then brigged for B&E and disturbing the peace charges. Honestly this sounds like ban baiting where player convincingly pretends to be an antagonist and then tries to report a person that they tricked

I dropped it before you started beating me up.

and you cannot reasonably expect me to notice it right away in middle of combat.

If you can’t handle beating unarmed, standing player who’s not fighting back against you, maybe you shouldn’t play security.

Actually i would like to officialy report the player back for ban baiting. Baiting other players to attack you by acting like an antagonist to make a forum report against them is not acceptable. I am convinced player was acting in bad faith from the start

I do find it strange how most of your interactions with other people, you being antagonist or security, are found aggravating by them.

Myself, I get the feeling that you treat the game with a bit of a PvP “I gotta win” mentality, which is not really that good for a roleplay server, but I may be mistaken. I’d like to hear what you have to say about this.

I stoped beating them as soon as i realised armblade was fake.

The fact they are in white screen proves the contrary.

Even if they lied and dropped the blade only in crit (as it’s coded that way), you’d still have had to beat them up a few more times afterwards for a white screen to pop up.

They weren’t even able to beat you or fight back, because the foam armblade has a very distinctive attack animation and deals no damage. So, you were not in the “middle of combat”, you were just left clicking on an immobile spaceman.

It is almost certain you noticed the foam armblade once it was dropped, which makes it even worse if efe is not lying and they dropped it before even being attacked by you. you’d have had like, 20 seconds to react and stop beating them.

That’s a funny thing to say considering you followed me in maint, not the other way around.

This is an interesting topic to discuss but byond the scope of a report. From my previous experiences everything i say is interpreted in bad will and used against me. I prefer not to speak byond what is necessary. I will be happy to discuss this matter at another time. Have a great day as usually!

He apparently gets salty about it or something, because instead of doing anything else, he whips out billyclub despite having stunbaton and beats me with it until my whole screen gets while (to those that don’t know, it means one more hit and I’d die).

This part is interesting, because billy club’s force is 10 meaning it would take 10 attacks to put someone in crit and 8-9 more to get them in the state Efe is describing.

Meaning he was attacked around 15-18 times by Solomon with lethal force.

Did Efe in this scenario fight back at all?

I’d like to hear the justification for the billy club instead of a stunbaton (that easily shuts down changelings and lets you cuff them).

They were then brigged for B&E and disturbing the peace charges.

Where did they break into?