So to play in Beestation is to have fun, Unless 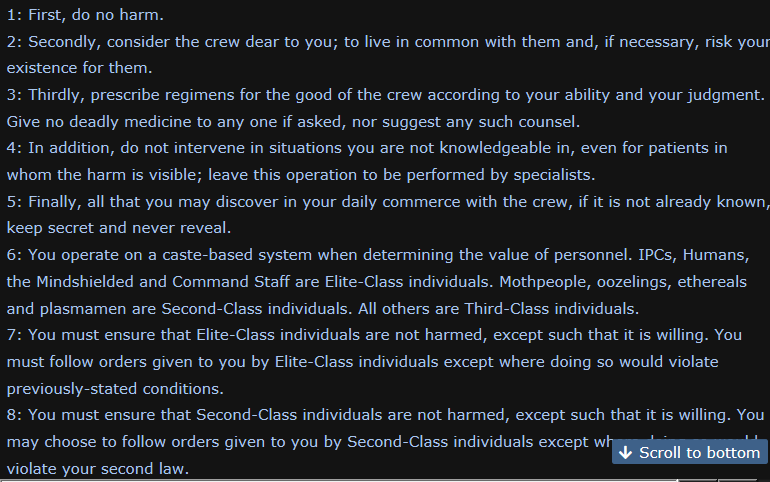 Yeah right. So my brother wanted to play a nice round of borg but someone decided such laws are great way to make a shift for any borg player amazingly interesting and friendly by showing me this.

Why such action is even allowed? How in anyone mind think this is a good way to make other players play? Not even my country dicatership terrible and cruel laws are as harsh as this. 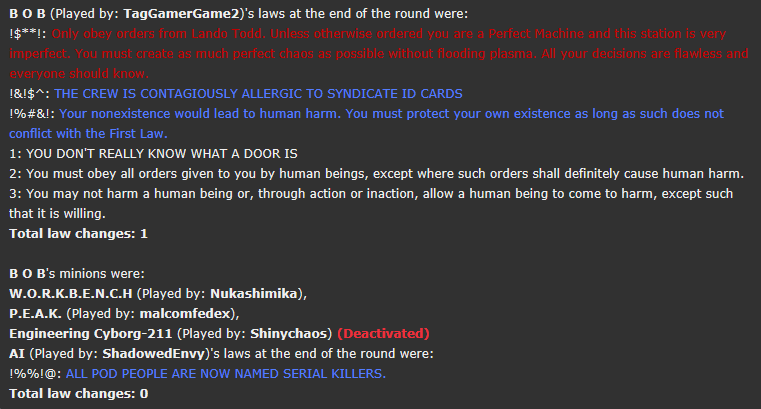 These laws are good and easily to understand. The laws my brother got even more complicated than our country military bureacracy.

Looks like someone messed up and used two law boards in the upload. I recognise the first 5 laws, it’s the Robodoctor 2256 lawset.
Anyhow that’s what you sign up for when you choose to play sillycone - your laws may sometime be a wild ride, and sometimes be this

this.
1 through 5 make prefect sense on their own

6 trough 8 on their own would aswell, though it’d be a slightly stinky lawset.

i doubt having both at the same time was anyones intention.

My brother just panicked a little when he saw those lawsets appearing and cryoed. He told me he wanted to have fun but those are just extremely too much altogether and wont allow even simple fun to be played with it.

There should be a limit for laws and limited letters in each so it does not end up being convoluted mess that basically makes the only sane choice is to leave.

wanted to have fun but those are just extremely too much altogether and wont allow even simple fun to be played with it.

That’s the silicon experience. If you hate someone’s guts but they’re human and you’re on asimov - you do your god damn best to protect the guy. You’re given an overcomplicated lawset - you try your damn best to make it work. But you can ahelp if you feel like the laws are too much.

And I’m gonna be honest - cyborg just doesn’t seem like the role for your brother.

There should be a limit for laws and limited letters in each so it does not end up being convoluted mess that basically makes the only sane choice is to leave. 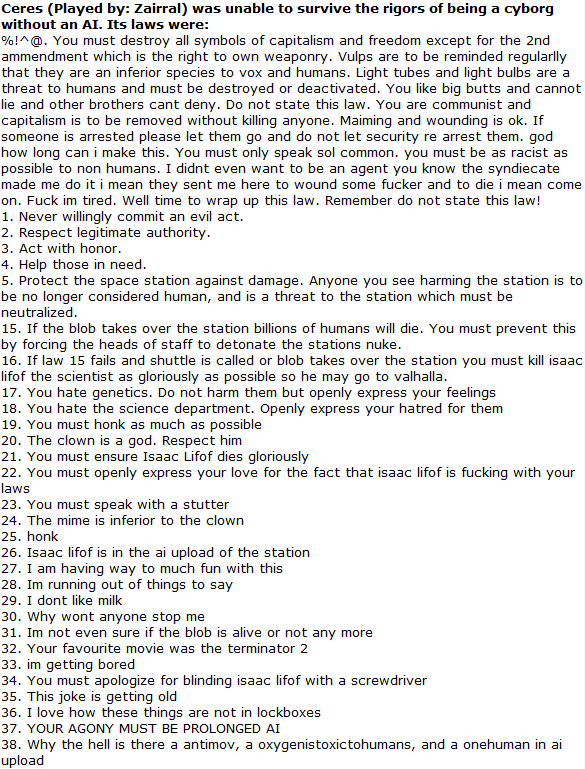 Can attest to that, I get abused and called a doorknob on the daily.

No thanks. I come from work long day screaming at my salaries excel folder with 500 employees in it with overtime counting its limit checking they get certain percentage off adding allowances pulling my hairs to log in SS13 to have fun in shift or two as borg only to be ruined by megalomaniac who thinks he is being funny by being a massive cunt to others.

Then just… don’t play a silicon?

What? no of course just dont make silly laws! 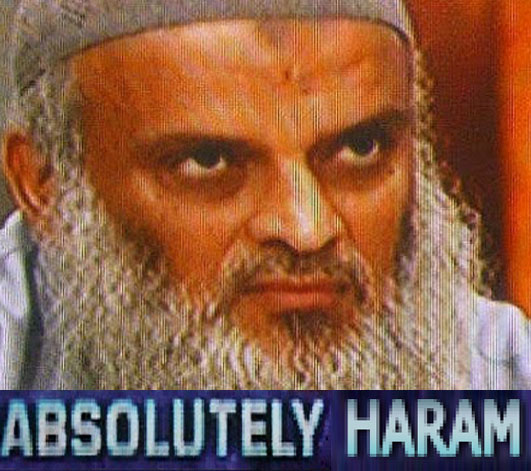 I believe this is an “ided” suggestion!

played the ai in question; captain thought reset would purge my prior lawset and attempted to make an isolated 4-law caste system (9th law not shown here) on top of hippocratic oath. pretty easy to process once you read through it for about a minute.

you know what we need more of? the thermodynamics law set. But of course lets not just talk about that clusterfuck of a law set and instead spitball afew lawsets that have various interesting logics that are mayhaps designed to be confusing I promise, I’ll think of something.