Part of Admin/Mentor Conduct Broken (if relevant): Senior Admin conduct, and the 1st point on the Antag Token R1

Incident Description: As changeling, I requested a genetic reimbursement after, instead of purchasing fleshmend, bought regenerate. (Both have way too similar of names, I’m not the only one that confuses them). I had regenerate taken away, as well as hallucinate, which I bought with the spare DNA thinking I had gotten fleshmend instead of regen.

Sergei stated he DID NOT know how to reimburse DNA, but proceeded to improvise anyways. After the 2 abilities were taken away, sergei spawned 2, pitch black, bodies in a dark room, with dark floor, for me to drain, but spawned one of them in a doorway through which A PLAYER HAD JUST PASSED leading to a breached room, which lead to depressurization, and I almost died.

I went into healing stasis. Before i could go reemerge, sergei apparently tried to give me chems, which did not work, he should have known that. A seccie found me for some odd reason, I was taken to medbay, had to reemerge in front of 4 people, who thought it was just an admin intervention after my examination told them I was dead.

I asked Sergei for more bodies since he disposed of the 2 older ones. He gave me 4, instantly, without waiting for me to enter maintenance. I wouldn’t be able to go back into a workable tunnel without crossing a busy hallway, where I would have been spotted, so I did it where I was (Aux Base). During the last prosbocis, I was found and arrested, and after I claimed “you ruined my round” (related to the pitch black room depress), he simply responded with “I am not responsible for your lack of planning”, alongside the rest of the story.

This is extremely unfair, since I was not given a choice, and indirectly murdered by an admin, twice. I would have been easily been able to greentext, I already had my research nodes disk, and fully sketched out plan on how to get my target with the abilities I had, because I imagined no admins would respond given recent times.

Additional Information: not related to ling; nearly 30 seconds after i claimed a ghost role, a custom event was spawned. I feel this was on purpose

As changeling, I requested a genetic reimbursement after, instead of purchasing fleshmend, bought regenerate. (Both have way too similar of names, I’m not the only one that confuses them). I had regenerate taken away, as well as hallucinate, which I bought with the spare DNA thinking I had gotten fleshmend instead of regen.

Not actually having any context or even having read through the report fully yet, you are aware though that you just need to absorb someone to reset your points right? This would’ve just been an IC issue to be honest.

It was roundstart, there was no one to absorb

This would’ve just been an IC issue to be honest.

I did not say anything in that regard. And i clearly stated in my message that i haven’t even read through the report yet.

It was roundstart, there was no one to absorb

This is and i’m being completely honest and bland here. A skill issue (especially because you just need to absorb any corpse. There are corpses roundstart in the morgue or go ask genetics etc…). There’s an IC way to reset your DNA. Ultimately i would argue that your whole ahelp should’ve just been marked as IC with the little information i gathered from reading the first two lines of the report.

And i clearly stated in my message that i haven’t even read through the report yet.

Alright, things on my end time.

I received an ahelp for a ling genetics refund due to a misclick. We, as admins, are under no obligation to entertain these tickets, but I elected to do so anyways in an attempt to ensure all our players have a fun and engaging experience at Beestation. I informed the player that I was unsure of how to perform such a refund while handling other tickets. The player informed me that deleting the powers and providing additional corpses would be a sufficient resolution to the situation. I deleted two powers, inadvertently deleting an incorrect one, and provided two bodies incapable of moving on their own.

Shortly after I receive supplemental ahelps stating that the area had been vented due to one of the flypeople I created getting stuck in a maintenance airlock next to their spawn location (Box station, by the way) A picture of the spawn location is below. 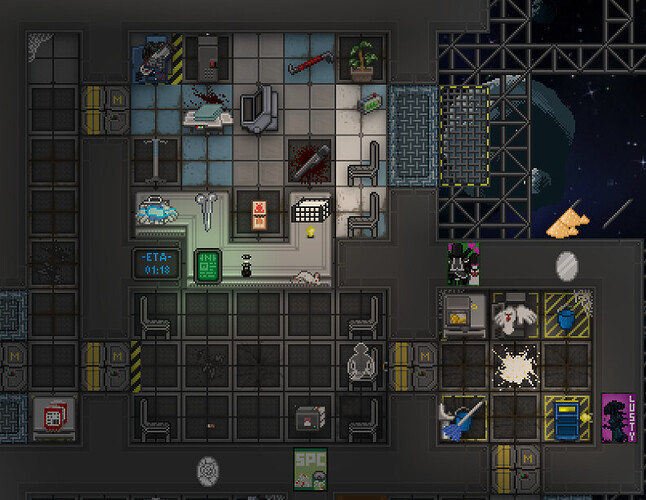 I proceed to administr 5 units of atropine while the player suffocates and see them enter a regenerative coma at -1.7 health. Death threshold, I shall remind, is at -100. Security arrives and “rescues” the body while chasing off a player set to arrest that was in the area.

The player was brought to medbay and eventually revived and discharged without any security, or as far as I’m aware other players, noticing the abnormality’s cause.

The player informed me that I had deleted an incorrect power and required additional genomes to repurchase. I provided 4 additional brainless apids in the mining shuttle construction area, where the player proceeded to chow down in front of an operable security camera. As stated in round, I am not responsible for changelings being caught eating in front of security cameras when surrounded by tools. Now we’re here.

Sergei stated he DID NOT know how to reimburse DNA, but proceeded to improvise anyways. 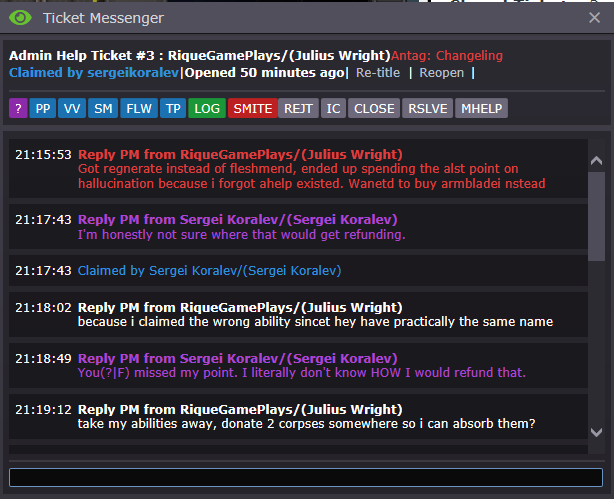 I was acting under your suggestion when I took actions after informing you that I was unfamiliar with the refund process for changelings.

he disposed of the 2 older ones.

I did not dispose of any corpses I spawned.

As for the supplemental four corpses I provided to you I provided them, after you requested them, in a relatively isolated environment with tools readily available, and a nearby escape pod.

not related to ling; nearly 30 seconds after i claimed a ghost role, a custom event was spawned. I feel this was on purpose

I did not create any custom ghost roles or events after your demise.

I am not responsible for you getting caught by security on cameras in that environment. If there was an issue with the location you could have easily brought it up.

With direct reference to antag token policy, let us remember the exact wording is: " * When the player’s antagonist round is inappropriately affected by an Administrator’s interference."

I see no rules broken here to be honest.

You should expect stuff like that when asking an admin to fix mistake you did.
We don’t have tools to reset your abilities. You could go into VV and do that, but that requires some knowledge of how (specifically) changeling works.

His response, while cold, is fair. He didn’t have to interact with you at all, you asked him for it.
An antag token would be nice, because, let’s be honest, it was a fuck up, but not necessary.

While sergi propably could have done it better, I dont believe he acted with mallice and the fact that he humored your request to spawn body’s for refund was generous already. I dont think hes seriously at fault here. I have talked with him about the situation and I dont think further action is needed