Is this for both servers or just one? If so, which one: Sage

Which server did the ban happen on? Sage

Appeal Reason: I feel like the admin did not consider any of the information I gave them and the ban seems to paint me as the violent instigator in this incident and that I just looking for loot and an easy valid.
Arch and efemu seem to not even notice what happened after the incident, and make it seem like I left him to rot after taking his gear(of which one item I actually accidently took and returned)

Let’s start from where this began.

I was at the hopline looking for additional information when a rad storm goes off. It is only me and HOP in the line so he lets me into Command maintenance to shield me from the storm.

In this corner of maints, there was the curator (who I mistook for clown due to his outfit), SSD engiborg(might’ve been AI shell), SSD Captain, and the Hop who were all probably within a 5x5 space of each other. As the radiation dies down, the captain leaves to get mutadoned and the HOP begins to make his way out the door…

I would like to note that I had forgotten to return his Holy claymore, but that was remedied after Sec found the box unrelated to him being antag or not, and I returned the sword.

After that, I was promptly informed I would be banned for my egregious overescalation

tl:dr if the ban reason was twice as long, half of it would still be a lie. 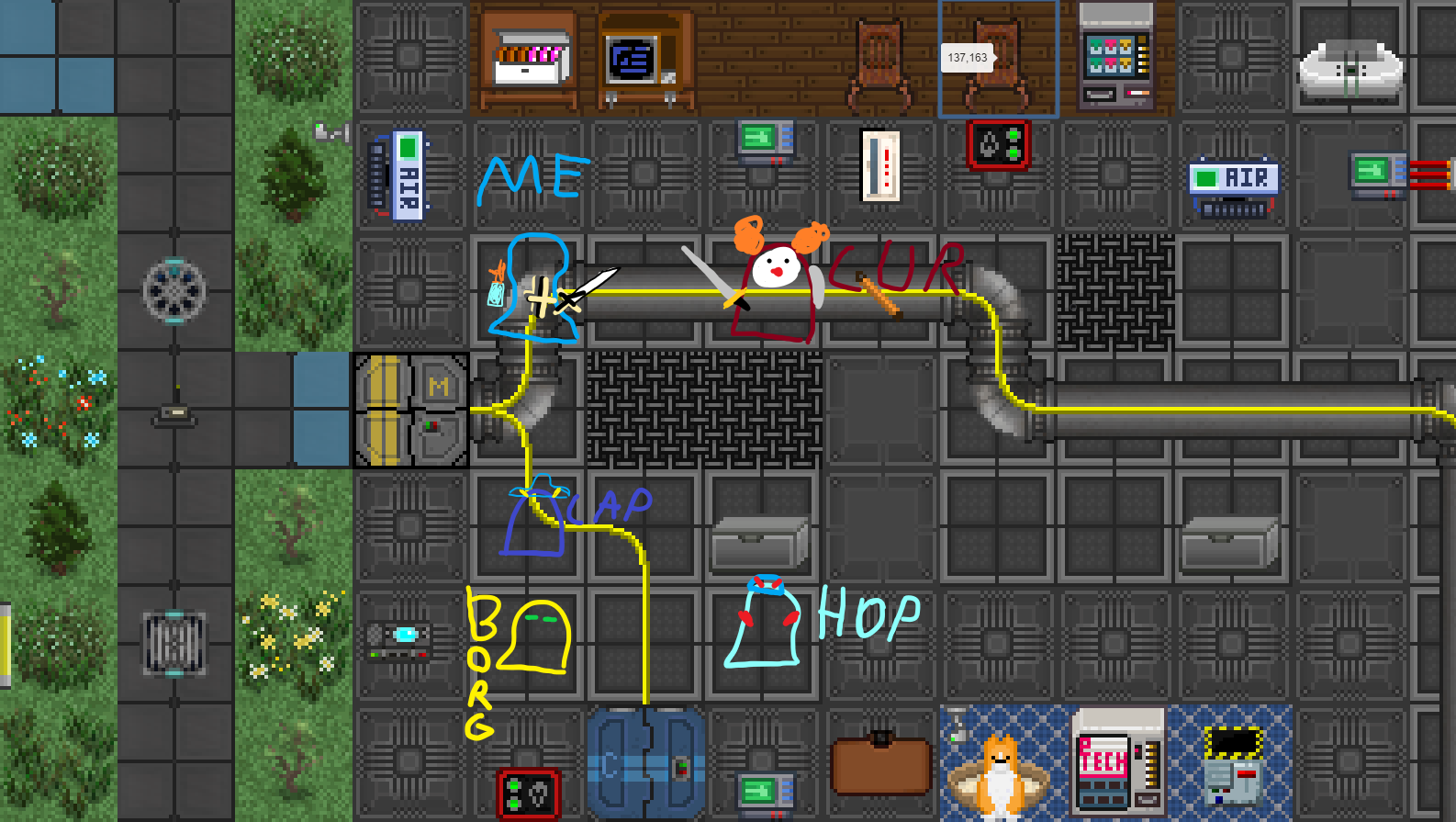 From what you’re saying, you were locked in maints with an antag who was going all the way to step 5 (Antags can freely escalate to whatever they want) and killed him in turn. Since you were stuck in maints with your back against the wall, you can’t be faulted for kicking his ass as you aren’t expected to fold over like a pair of jeans and just die.

It was only after the ban that I reviewed my saved chat logs and saw I fucked up with the spray bottle which may have seemed like pepperspray to him.

Also, tthere is the possibility that the box was just a maint spawn, and thats why sec let him go later.

Fuckups all around I suppose.

Me and him made our peace and lost nothing but time with our stupid brawl.

After quickly checking logs here’s what I think:

And after taking his backpack, you still mistakenly keep forgetting to do what you originally planned to, so to take his ID:

As I take try to rifle for his ID, I mistakenly pull his backpack off

If it was a honest mistake you would get his ID next or strip both at the same time.

It’s overscalation and looting him was powergaming. And still, if you didn’t mean to strip his bag you wouldn’t open and loot it, would you?

This coupled with you screaming to warden “we got tator” makes me believe you are not on sage to roleplay.

I suggest this appeal be denied.

It’s overscalation and looting him was powergaming.

Okay, this I dont understand at all. I accidentally spray him(a nonharmful annoyance equivalent to a shove) and he immediately goes for the kill, so I crit and accidentally overshoot with the new system and he dies.

I didn’t get shoved and punched or anything outside his immediate hostile response, I got sliced by a dude’s goddamn longsword with intent to kill.

wouldn’t open and loot it, would you?

What loot did I take? byond the one item already stated was accidental

And still, if you didn’t mean to strip his bag you wouldn’t open and loot it, would you?

This couple with you screaming to warden “we got tator” makes me believe you are not on sage to roleplay.

This looks bad.
Really bad.
I fucked up here.
I entirely accept a ban related to this.

The only defense to this is that I was not hunting for a valid, its my own idiocy. I already had a pretty good reason for fighting back in that I didnt need a valid to cement a reason for incapacitating him.

My only issue is that the reason I should have been banned(apparent bag searching for valid), is not at all mentioned in the ban reason and the ban reason itself is basically half-false.

I am requesting the ban reason is updated to reflect information and possibly get a sentence reduction.

I made my peace with the guy after he was released from security.

@Efe if you could look at this that would be cool

Fine, you’ll get your ban reason updated to better reflect what you did wrong. As for sentence reduction I have to say no, considering you validchecked the bag instead of taking the ID you claim you originally wanted to.

Since Efe doesn’t have the full permissions to deny the forum thread himself, I will be stepping in and doing the deed for him.

This ban appeal is being denied and the ban reason will be adjusted as per his last response.