Playing chaplain is my bread and butter, but it really feels like I only ever see the Ever-Burning Flame sect getting use because it has the best benefits (total fire immunity for torching the two morgue spawn bodies at round start) compared to the other one two sects that we have.

While I personally would keep to the Pyre sect (as it’s called in tg) as it’s thematic to my character and the religion I have them doing, I feel like we’d see a lot more creative chaplain gimmicks if we had stuff like the greed, or honorbound, or sparring sects available.

Porting over what tg has would add an additional 5 sects, and while some of them have overlap (such as sparring and crusader) they are generally pretty well defined as to their purpose.

If there were more mechanical interaction for chap I fee llike I’d play the role more.
Right now it’s:

Have I missed anything…?
Seems like half a role, to be honest. The chapel being so out of the way in most stations means that people looking to RP are usually far away in a bar or something.

Ultimately, it feels like cult is the number one reason that chaplain exists, as you’re not even really that effective against heretics compared to a crowd of seccies with shotguns. Even when I announce what I’m doing as a chaplain, you only ever manage to pull two or three people at most to the chapel. My largest event ever was hosting a wedding for valentines day, but that was a server event and initiated by a pretty popular static (thanks Roomba, legit one of my favorite rounds!)

I do see the tech sect every now and then, but it’s very very rare! Needing to sacrifice high-capacity energy cells can make it a pretty bad resource draw, unless you bother botany for plant batteries. Only having two rites to perform, with only one having a unique effect (turning someone into an android, or summoning random mechanical organs) doesn’t give you a lot to work with, and falls into the “You need people around to give your blessing to” trap once again.

The chapel being so out of the way in most stations means that people looking to RP are usually far away in a bar or something.

In all honesty, the most interaction I get as chappie is on Kilo of all places, because it’s right across from the bar and right beside medbay. On Meta, Delta, and Box, it’s slapped right by departures and is also never visited. On Fland, it’s down a hallway in its own separate wing alongside the library.

Pubby chapel… It’s Pubby chapel, need I say more? Most people don’t think it exists and the fucking transit tube is the bane of my existance. 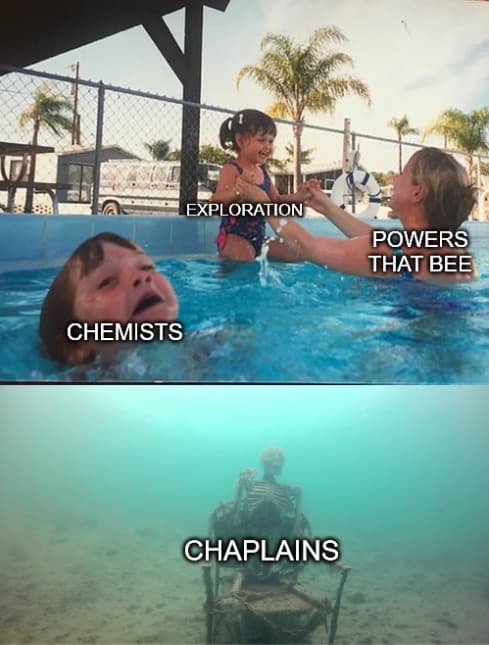 (to be clear: I fucking love bee explo and love the attention they’ve been getting. Just makin a funni.)

I might have to dive into how Chaplain Sects and rites are performed to see if I can just back-port it myself with absolutely no* knowledge of BYOND coding.

This topic was automatically closed 60 days after the last reply. New replies are no longer allowed.