How long have you been playing ss13?: I’d say around ssethtide, but probably longer.

Who vouches for your experience (if anyone)?: Alas, I am alone in this world. Some dude on LRP said I was based though.

Game Experience (More Detailed): I’m pretty competent at most of the jobs, and antags.

Aight, i’d like to first go into my shindig as an engie when I was first getting into SS13, I can safely set up the SM and make wacky adjustments to the cooling loop, do solars, I’m half decent at atmos but I know what I’m doing with vents and pipes and stuff. I’m generally 7/10 with engineering, I think. Except for the tesla, god help me with the tesla.

Medbay is my second best department, I can do surgeries quite competently (still gotta bring up the wiki), I know that you should probably try defibing unless the situations kinda scuffed or they’re a plasmaman. I also know what I’m doing with genetics, x-ray vision is a lost art these days. I’m dead weight as a chemist though. I think I know what I’m doing in Viro, not sure though. In general 8/10.

As a miner, I’m okay, even with the hours I’ve put in, I’m still arse at megafauna. For the rest of supply, I don’t really play em’, just steal the budget cards and then go get guns or something.

I don’t wanna talk about sec, but I’m competent.

For Sci though, I have that shit locked down, I can make baller nanites, use the Exper-imentor to get the corgi device, use the R&D console and I’m pretty sure I have the ideal research tree memorized also I know how to use a Brped. I can do xenobio, still haven’t gotten anything close to a rainbow though, just focused on yellows for Robo. Robotics is probably my strongest job in the game, I’ve memorized how to make most of the mechs, I have floorbots on muscle memory, whenever I see a borg shell, I get Vietnam flashbacks. Alas, I am awful at making bombs, probably a good thing though. In general, 9/10, hopefully.

Also yeah, I can do botany but I’m not great at it, same with being a chef and bartender. I’m pretty good at being a silicon though, best jannie borg the worlds ever seen. 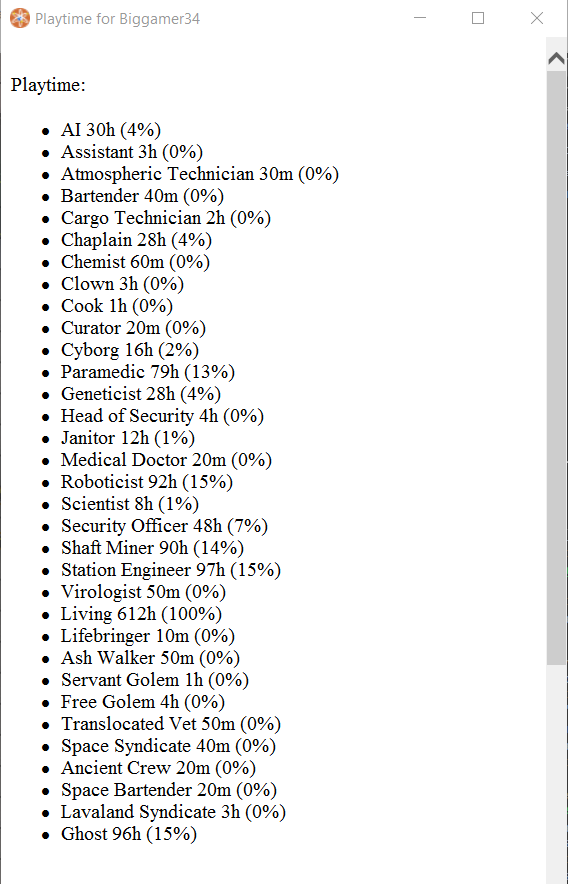 you’re based enough, i +1 this
just don’t be like @PowerfulBacon and join stinky trialmin gang after getting mentor

The most asked questions involve engineering, atmospherics and mining. So you’ll fit right in for the most part I guess. +1

+1. Seems to have most major jobs and roles nailed down and is le epic. He must join the mentor metagang.

+1 good shit about engineering and atmos, but you should learn a bit of choomist, its really fun

Accepting at a +6, welcome to the team.

I cannot add your mentor rank on discord because you are not verified, if you wish to be added please let me know when you have done so @Pat-Rick