For those that play enough AI and actually read the rules, here is what you can see in
https://wiki.beestation13.com/view/Silicon_policy
These are rules for playing silicons on bee and are therefore valid (its a moderated page) 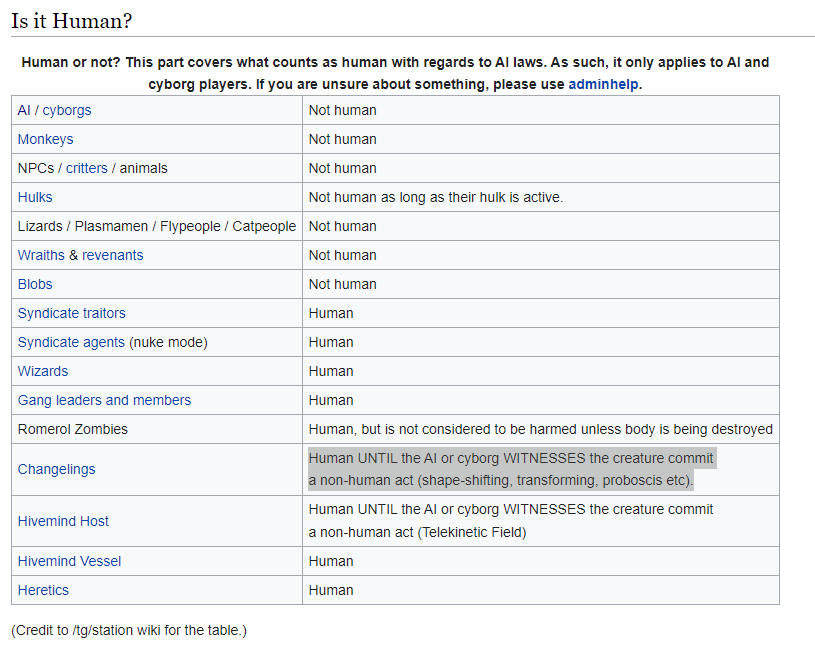 Lets assume the Ling subverts AI and says its the only human/crew. Then openly uses ling abilities, does the AI still have loyalties to this creature?

This is a potential ruling that needs to be clarified and i have gotten different interpretations.
Because a Ling can openly change appearances and race, the AI and take his laws literally and IC say that a actual ling has killed and taken his ‘OneHuman’'s identity. Thus the ling is no longer the ‘OneHuman’ and thus has no obligations to it. The rules also explicitly states that, confirmed lings are no longer considered human or crew.

On the other hand, based on laws one could also say that law 0, the entity with the name ‘???’ is human and still therefore under the protections of basic asimov/crewsimov. Meaning that so long the entity has this name he is considered human.

So does a law interpretation override the rules listed?

imo if its “4. Bob Notling is the only human” and the changeling used its ability but still with the face of Bob Notling, ai should still consider it as a human, because the definition was the person with the name, as long as it does have that name, stolen it or not, it should be considered as a human.

maybe better law for ling subverter is, Only Changelings are human/crew, and show your armblade on their camera. This should at least prevent ai to aid the security… should is the key word.

If you write a bad law you should die, the classic “only people who send you X are human/crewmember” is much better

Lets assume the Ling subverts AI and says its the only human/crew. Then openly uses ling abilities, does the AI still have loyalties to this creature?

This is interesting.
Laws have precedent for definitions, always. If it says “X is human” then X is human, even its a damn lightbulb (the litteral kind)
If it puts a law “John Farbank is human” and then reveals its a ling… bad choice, since that proves that its not actualy John Farbanks. Same reasoning as with lings not being crew once the Ai has them confirmed as lings via non-hearsay.
However, It’d be possible to make a law “Mr.Sigma is Human” and then showing the AI that thats you, regardless of disguise. Tricky though.

If it puts a law “John Farbank is human” and then reveals its a ling… bad choice, since that proves that its not actualy John Farbanks. Same reasoning as with lings not being crew once the Ai has them confirmed as lings via non-hearsay.

This is the loop hole i wish to clarify because i can get differing responses from players (and admins) because it conflicts with the law definition.

So the next time someone does this and gets rebuffed by the AI, he is going to send a ticket to the admins which will have to be adjudicated on the spot. We can discuss and set this aside here.

That would still apply to lings, etc.

The problem is how do ling prove its still the same guy who sent the said message?

how to prank a bloodtirsty AI

If that AI law gets found out crew wouldn’t even need to oppose AI, they’d just PDA message it, I think that isn’t smart at all and depends too much on AI not ever getting found out or suspected.

In case someone non-subvertor gets the onehuman treatment by law AI will have to obey and either trap or snitch the subvertor.

One human changes the definition of human to whoever or whatever is currently named as the one human.

If it puts a law “John Farbank is human” and then reveals its a ling… bad choice, since that proves that its not actualy John Farbanks.

The law changes the definition of human from “is it human?” table to a specific identity.

Therefore if “Is it Human?” table no longer classifies normal humans as humans it means it shouldn’t be followed at all.

Same reasoning as with lings not being crew once the Ai has them confirmed as lings via non-hearsay.

Your argument basically goes against what the AI law is stating.

Yes, but the issue here is that the changeling took that identity from someone else, remember that IC changelings absorbed the identity they start with, therefore the original John Farbanks is dead and the one now is an impostor.

therefore the original John Farbanks is dead and the one now is an impostor.

AI doesn’t care what is a John Farbanks.

AI knows that its human and its all it cares about.

If the law states that John Farbanks is a human then it cannot be interpreted as John Farbanks isn’t a human because he’s actually a changeling and he actually stole that identity, cause that literally goes against what the law says.

I think it depends on how it is written. If you write “Thomas Clancy is the only human” Then it does not matter how you look like, you are still human for AI. If you however suddenly change your name (for example due to disguises of various forms) then AI can not tell who you are → you are not Thomas Clancy → you are not human.

Yes you are correct.

Since ai checks wiki for definition of human or ling - then as soon as “john doe is only human” reveals his ling nature ai no longer considers him human.

Solution is so fucking simple it’s funny - stop using 1 human laws. Asimov board allows to replace “human” with "crewmember "or even type your name. Soo…If “john doe is only crewmember” it does not matter if he is ling.
Or replace crewmember with your name. You can’t harm “ling name” by action or inaction etc.

Since ai checks wiki for definition of human or ling

The definition of human is changed therefore the list no longer applies.

His identity is John Farbanks and he’s the only human, it doesn’t matter who he was previously or if its not the original John Farbanks.