Oh boy where do I start

Your Discord: Sleepiest of Sheepies#4058

LRP or MRP server: MRP though it felt like Golden

Incident Description: Joined in as barkeep, not long after I’m asked if I want AA, to which I politely decline (or as politely as my mute barkeep can explain that he’s not interested), I go to the bar. Apparently a few people might have had guns, and a lot of people were given out AA. I ahelped this and got no reply. Later the shuttle is called by vote, then recalled, then we picked a shuttle to call it back with (the wabbajack one I believe). Get to the shuttle pulling my drink dispensers, and I only manage to pull I believe the booze dispenser through before takeoff. Why, you ask? Five million fucking corgis. Some were killed by others in flight, some were pushed by me out the airlock (red corgi sus jk I’m colourblind IC) and then, disaster. Things flew everywhere and I was launched out of the airlock, luckily however I got a skinsuit on so I didn’t die until post-round. Though being marooned isn’t the best ending I’ll be fair. Someone had reactive armor. How and why, I will never understand. 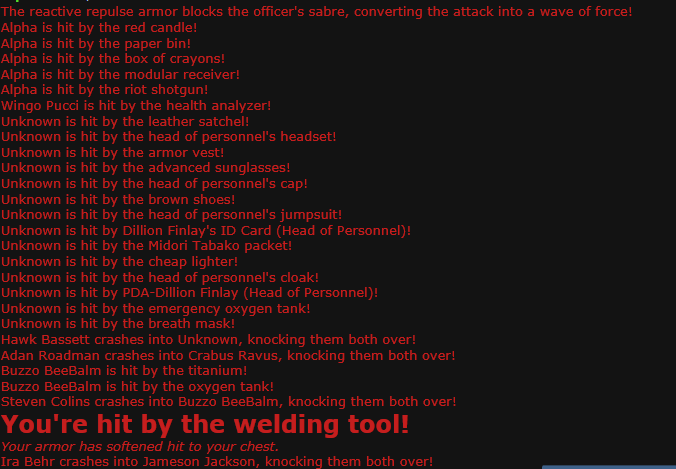 The five million corgis thing was a combination of cargo making 5 million credits from gas mining on lavaland as well as people having AA and coming into cargo and ordering whatever they wanted.

Oh! And the AA thing was because the HOP dropped his tablet in the hallway, with ID in it and a changeling picked it up.

Source: I was a cargo tech in this round and changeling was my fellow cargo tech, we discussed it after round end 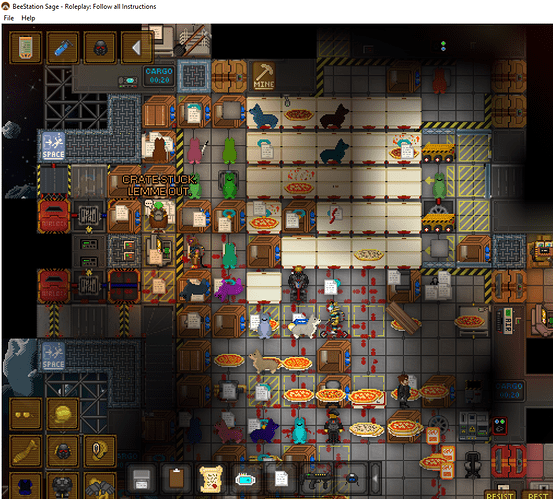 Oh! And the AA thing was because the HOP dropped his tablet in the hallway, with ID in it and a changeling picked it up.

He didnt admit to being a changeling during shift but he was able to change my access restrictions in cargo when I was experimenting with what kind of armory crates you can open without access by buying them privately, I actually needed him to take away AA to do that lol.

As RD that round I can vouch for the AA thing. I got AA from this changing and I used it to gather station pets.

Im the one who brought a dozen corgis onto the escape shuttle (and who also ordered 50 of them, along with 100 boxes of pizza, with QM’s permission)

i am extremely sorry that it caused you to die - I didn’t think that would have even caused a problem.

Also, I believe the ling whom was handing out AA was the one with repulse armor (but I believe it got switched between people too, so not sure who had it on shuttle), and even then, i’d say it’s hard to blame someone for having a repulse armor since, it’s not supposed to activate unless you, you know, attack them