Wirecutters look like tiny and shitty, but should be larger since you’d be cutting large wires with them for solars or SM, not some circuit project.
The wrench is not distinct enough, the previous design had a clear gap in it. It also has a weird 90 degree angle which is not nice to the eyes, but otherwise isn’t too bad.
The crowbar isn’t too bad either, but it’s got this weird colour gradient going from black to light gray, it also sits at a weird angle while the sprite is a bit too large for the box it’s in.
The welding tool and multitool are my two biggest complaints, they don’t look like either anymore, they’re completely different devices than what they function for.
A multitool is just a multitool, just look up a picture and the previous sprite would have represented that perfectly.
The welding tool looks like a small handgun and doesn’t even have a fucking tank.
The screwdriver is ok too, but the handle is a bit too red and lacks shading, while the rod for some reason has more shading which makes it look akward
I think the current multitool sprite would fit much better for the analyzer. If you look at the analyzer now the screen would be far too slim to display all of the information about all the gasses in the air along with their percentages.
Edit: In short, they are weirdly shaded and some look too high tech or unrealistic for what they are while also being not very distinct.
These are my thoughts on it, what are yours? I’ll be making a poll on it soon.

EDIT: here are some pictures

The new toolbelts (I quite like these ones, but feel like they could be an extra along with the regular one, but I have no complaint for these).

The new inducers, seem to come in different styles? I quite like the yellow one and the purple one is good too.
So some I like, but most if it is bad in my opinion, maybe I’ll copy this topic again if it doesn’t get a lot of views since I added much needed info hours after I posted it.

Also, thank you AzlanonPc for spawning me into Centcomm and spawning the tools for me to take pictures from! He even gave me some variety :D.

The multitool and t-ray scanners, aswell as the pipe layer are shit.

The wrench could do with some simplification, yes.

T1 welder looks weird, but i myself dont mind it.

Everything else im happy with.

The plasma can looks like a plasma box now too…

THIS IS THE RCD, IT’S HORRIBLE.

I like it, looks chubby.
The blue part could be bigger though, gotta see that ammo

Definitely agree with the blue part, but to me it looks the opposite of chubby, the older version was more rounded and chubby with a brighter colour.

Sorry for the wait, I asked an admin to spawn me into Centcomm with tools, but I made the pictures and they’re now in my top post under an edit.

The sprites arent bad its the style that fails, its not the theme beestation has.
Its basically something u would see on eris 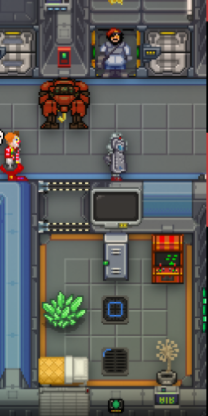 lets not lie, tg is a ugly piece of shit compared to stations like eris, adding fancy tools makes them stand out like a sore thumb

I’d agree with that, and I like the Beestation theme.

Seems like the vast majority of people dislike this change. Some tools just have a silly design, have a bland design or, as Milky pointed out, don’t fit the style of Beestation at all.

So, what now? Will it be reverted or improved on? I did quite like the toolbelts though, but feel like they should be of some kind of higher tier that can store regular items too with their pouches and all.

Sell these to eris in exchange for a new gun-code and weapon sprites.

oh and the rifles are okay i guess

The sprites are pretty good tbh but they don’t fit in bee’s graphic style at all (as milky said) and the fact that they changed a lot from the old ones makes people go rage mode againts them. Also the fact that the PR’s are named great resprite might mean that they plan to change the whole sprite set