Incident Description: while disguised as the (i’m a traitor) warden me and the traiter qm start a battle in security to complete our objectives, the clown and mime ran over, and a random golem either somehow opened or had the ai open the door (which caused more human harm) causing them to try to valid hunt us when they weren’t even involved in the situation. the battle continues on and the mime either used an id or the ai let them into the armory to get lasers and bolas against us which we are still according to law humans. the ai bolts us into the room blocking perma. i used a emag and the ai closes the blast doors on me while letting the mime gun us down. we managed to escape through a portal which the mime somehow tracked us down in the maints near dorms from sec and began gunning us down which led us to a chase to dorms where the mime and eventually clown came and stomped on us.

Additional Information: overall valid hunting of the three of them, mime specifically the most. and ai breaking laws to help valid hunt

What Lawset was the AI on? Were any of the three antagonists?

What Lawset was the AI on?

If the AI is on basically any other lawset besides crewsimov or asimov, “validhunting” rule breaks won’t usually apply to them.

Please cite the line you are referring to.

Apologies, the ai was on Asimov. none of them were antagonists and i was referring to

Im at work so ill post more later i guess

We were guessing warden was brainwashed as we didint have sec huds to see mindshields, but they turned out to be an imposter on the shuttle. (They did look sus with a gasmask when earlier the wore no mask at all)

I found you by chance as the doors out of sec meeting room were bolted so i went through maint and there you were. The clown showed up after you were both down so they just told me how surprised they were at the situation.

you yourself may not inflict any amount of human harm, even if it will prevent greater future human harm.

the ai still caused harm by locking me and qm in a room where you shot us with lasers and the ai crushing me with a blast door?

AI locked you and stopped ongoing harm, no matter if it later caused mime to gun you down, blast door crush could have easily been an accident. You were also already dead, dead bodies cant get any more harmed, you being revived would’ve caused harm to live crew.

If i had been powergaming i would have had hulk from genetics and medpills from chem along with armour and a few xenobio crossbreeds. (Had none of these)

Validhunting means im hunting for valids and rushing to fight valids the moment someone yells on the radio “help help valid killing me in x” or simply attacking people who have things that make them valid.

I had a mission from the original warden to “get ashlie” so i did. You happenned to out yourself as fake by attacking det. And ashlie had spoken so i knew their id was a fake.

1.ok
2.there is a delay
3.not standardized aka you cant be banned because you werent deputized in the exact manner prescribed. If the page was moderated that would be a different story.
4.the ttv was teleported infront of sec so i took off its remote detonator inorder to not get killed by it. Dont remember exactly how it wound up inside sec propably clown or someone else dragged it in. So no didint make it.

No idea who teleported it there or who made it

Why would you “have a mission” to get ashlie as a mime? You’ve done a lot of valid hunting and powergaming in the past, it’s not hard to believe you are doing it again

Why would you “have a mission” to get ashlie as a mime? You’ve done a lot of valid hunting and powergaming in the past, it’s not hard to believe you are doing it again

Why did you get deputised? why didn’t you decline? What gives you the right to take the AA and not leave it for any other member of command or security?

I don’t think I’ve ever seen a round where you aren’t a deputy or out hunting for valids.

In what way is being deputised as a mime (a mute service crewmembers that only exists for entertainment purposes) beneficial to security?

It’s not your job, simple as.
Just play security if you want to power game dude

Actually how did you even become a deputy? I highly doubt the warden went out of his way to find and deputise you, a random mime.
Did you ask to be deputised?
Or did he remember your success in valid hunting from previous rounds?
Either way, a warden really shouldn’t be deputising a mime or clown… that’s literally the two members of the crew he shouldn’t… 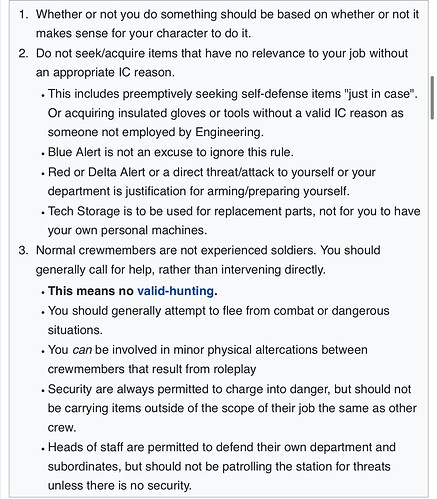 What was your justification for heading into danger or signing up to be a deputy? Apart from having nothing to do with your job, why would you rush into danger for little to no reason?

Didn’t you hack into sec for the bounty on ashlie’s head? Your reason being “warden will give me anything for their head” were you even officially deputised?

And this here, proves my point, you did it for loot and killing the valids as usual.

Keeping your life is a pretty good reason for declining being deputised, you aren’t an experienced soldier, you are a MUTE crewmember who provides entertainment for the crew.

I’m sick of seeing validhunting mimes who just meme around, write shit on paper instead of actually acting it out. Play a clown if you want to do that shit

Are you a pacifist?
Being deputized =/= Dying.
This is not a topic to salt about how every other mime but you sucks.

Also generally is still a keyword in the rules.

No? I just like playing by the rules? And I know, i was just adding more info.
Such as you are known for doing shit like this as a mime, and usually end up getting away with it or staying within the rules while admins are online

I play by the rules…
And there are very few admins on during the UTC +2 hours but they are there and can be called at a moments notice from discord if need be.

I am known for being robust as a tot and robust without even having any gear on me…
Havent even been deputized more than once in weeks.

Mime was given permission and reward by warden to hunt, pretty good IC reason to agree with him, at the very least he could’ve gotten expanded access from warden which is always nice. for your other questions you’d answer them yourself if you read the entire post. Heepox is just repeating what he already said up until now.

I understand that, but having past experiences with the dude, I know what he’s like.

Having “Permission” still shouldn’t justify running into danger, validhunting and powergaming. He shouldn’t have experience as a one man killing machine.