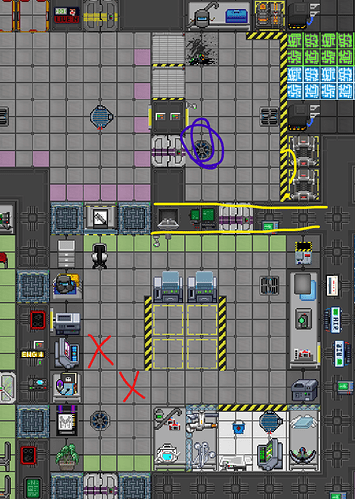 image595×838 119 KB
I would like to point out that he could not know or see that he killed somebody before being told in bwoink due to the opacity of the undamaged solid wall that was present between the rooms.
I will assume that you had X-Ray eyes implanted which made you not notice the said wall.
Brille March 28, 2020, 3:37pm #3

I had no X-Ray eyes.
So, if i maxcap an area, and alot of people die, but i didnt saw them because i wall myself in, i will get away with it as non antag?
Its a Grenade, probably, you dont throw random nades…
Also i bet my ass that he just did not simply spawned in the mechbay, so from outside it was clear to see that people are inside

Its a Grenade, probably, you dont throw random nades…

Which he was told to not to do.

So, if i maxcap an area, and alot of people die, but i didnt saw them because i wall myself in, i will get away with it as non antag?

This is a different situation. Unlike maxcaps, EMP grenade effect is somewhat less obvious due to the absence of a giant hole in the station. Again, it is not okay to blow them up. From my perspective, the resulted damage was unintentional, therefore I gave just a note.

Examined. To my knowledge, the sec officer was blowing the EMP grenades in the spot that I have marked with blue - in the mech bay, that has no windows to the robotics lab.

Yeah even if he blow himself up in the Mechbay, he must have come from the outside where he clearly saw that people are inside… come on

Lets shortcut that conversation.
It is a EMP grenade, it fries electronics(randomly pinging wires or dealing damage)
They are on a space station…
What is on a space station?
Electronics. A LOT of electronics.
The EMP grenade hit two people standing 7 tiles away, so it has a decent range.
Almost anywhere on the station where you could throw this, you would fry something or someone.

Im more curious as to how the Security Officer acquired the EMP Grenade. Sounds like he got it given to him by some Chemist, who probably shouldn’t have chosen to give a grenade to a new player. Edit: Didn’t mean for this to be a reply to St0rm’s thing, meant to be a general reply

So tell me if im mistaking:
It was greenshift, He “accidently” made EMP grenade (a lot of luck there…) and he threw it on robotics which he was told NOT to. And it was MRP
And im pretty sure I saw morivanne lore a couple of of times and he (she?) Is not a new player, or if new, is new to SERVER not the game.

I think those were “classic” emps

Imaging playing the game on a, allegedly, MRP Server and expect people follow the rules, LOL my mistake.

Oh yeah, i was Axon VX.
We got emp’ed in shuttle cockpit (didn’t even notice from where emp came) and sadly both died due to having implant malfunction.

But I have no hard feeling against him, because not many people know about implants and what they do plus only the fraction of them know that emp can kill implanted people. If he understood what wrong he did, i am fine with that.

Imagine breaking them because some people don’t follow rules.

Considering I just witnessed this happening again, as well as watching them tide all over the station to build an omni-department in maintenance.

EMP was thrown directly at player this time as well, and an autodoc had been publicly available for over an hour by this point.