When Security first faced the dreaded Bee-Man, I realised the glory of the Syndi-kits and they quickly became some of my favourite items to be bought with TC. They offer you a gimmick, are actually useful and are generally pretty entertaining both for traitors and sec (ignoring some of the stealth heavy ones from the Tactical kits). But the limited number of kits lead to a lot of repetition, which can hopefully be adjusted with more kits.

This is more so to hear what other people would suggest, but I think a Cowboy/Outlaw gimmick kit could be funny.

Cowboy Kit consisting of:
• Cowboy hat and suit which probably exist in the code. I’ve done this gimmick with my own TC before
• Syndicate revolver
• Syndicate lasso that exists but I forget the name of
• Potentially a cow summon for a mount to use the lasso on
• Voice changing mask and Syndie ID called “Mysterious Outlaw” to remain anonymous (and because playing a character is funny and gets ruined a little if you’re already playing a bee regular)

For the Rat King gimmick 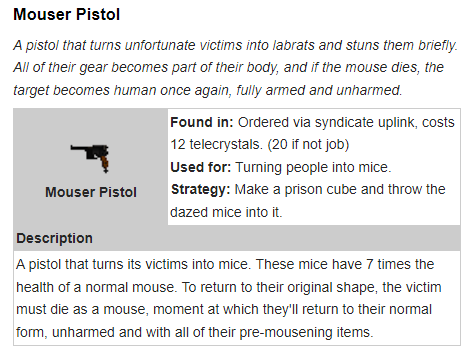 oh my god i completely forgot about that. It’s literally what made me think of the rat king one a couple days ago

Alright I’ll be listing some stuck in my mind

We start with the Syndi-kit Special

Call me crazy but Syndi-kit Tactical

This is too strong for a normal traitor to have imo

One of the kits have a full lone operative equipement set alongside some explosive and an emag (Meta-Ops, syndi-kit tactical). Considering you use all 20 tc of your kits, yes, this is incredibly powerful but is also buried with all other tactical kits which means you won’t see it everyday due to it’s meta nature

Cowboy hat and suit which probably exist in the code.

A cowboy hat and boots do exist in the code, but aren’t sprited well and look pretty shit. I have always wanted to add an orderable crate with western wear and cowboy boots with spurs that jingle jangle jingle

But spriting be hard, yo.

I mean
one of the kits gives you a desword and an instant summons spell + chameleon noslips.

but my funny star war referenece

yea, for every pseudo-lone op and returning desword there’s a dozen or so mad scientists and men with binoculars

I’ve talked about the syndie-drip gang kit before but here it is again.

Extras notes.
Once you put on the Leader style coat, you receive the new objective “you must escape wearing your dripped out fit, PROTECT YOUR DRIP AT ALL COSTS!”
Getting flashed with the Indoctrination flash gives you the following objective “You must follow the lead of the most dripped out syndie man and escape while maintaining and protecting your drip”, it gives you a hypnotized status too.

I like this, because it means if you drip harder than the dude who bought the kit you can steal the followers.

And that is reinforcement to PROTECT YOUR DRIP AT ALL COSTS, if you don’t then you loose your entourage.

Additionally if you steal and choose to wear other options, then you Lose your followers then too AND are failing to be dripped out of your mind.

Finally if another traitor gets the syndie drip kit then that means that they too are the dripped out syndie man and can order those guys around like you can.

another thing about this kit is that none of it is technically dangerous contraband.

(debatable addition to allow you to craft a dripped out blood red hard suit, litterally just wearing the jacket and shoes over the hardsuit itself)