Other changes to include in the PR:

Well since it doesnt have a lock, emagging the machine should also give it a locking function and the ability to put dangerous chems in it. That way its A: Easily noticeable and B: Serves an traitor function in some capacity.

That’s what I fucking forgot from my original post, the planned emag effect.

I lost the entire original post at one point while I was typing it. I’m pretty sure that was the only thing I lost when re-typing it up though.

Does this sound like a happy compromise between infinite sleepers and being completely reliant on chemists/doctors to exist and care? Particularly asking in regards to the supply of roundstart basic chems and ability to easily restock them via Cargo in case of methsploded chemlab or similar situations.

Yeah and i can see this change being accepted really quickly due to the massive powergaming potential.

maybe have sleepers be a late-game tech that uses power cells?

How the fuck do medibots even work? They dont do anything for me. Ever. I stand next to one for 5 minutes and nothing happens.

I brought this bounty to a coder friend of mine who worked on the sleepers prior, might have some creative insight to help with this bounty. I’ll DM you if he’s interested.

The real question is-how well are chemicals transferring from pool to players that are swimming in them?

Pools have both the temperature control and possibility to add chems into them, just few days ago we we merged anesthetic tank holders and while I haven’t used them I bet we could put any sort of tanks in them.

So we could have these 1 or 2 tile wide pools with temperature set according to needs, medstaff would have to monitor temp and chem content as well as make sure that tanks with anesthetic and, what’s more important, oxygen are still full and masks are put on patients properly so they won’t drown

My idea would use existing content, which always seems like a better solution than adding objects with one specific purpose, you would save 40$ and I believe my proposal actually fits your vision (at least as far as I understand it) of medbay-medbay staff would have to actually monitor temp and chems in pools, gas in tanks on holder, check if players in pools have masks put on or they would drown, monitor their health as they are being cured by solution and take them out when time comes (I can only imagine frost damage once Cryoxadone is gone or causing an overdose so I guess chem proportions would matter as well). Its not magic, its a more grounded solution than sleepers, would require more operations than just throwing people in cryopod and would require paying some attention, while not necessary being a burden and chore.
Just throwing it out there, I’m not playing as medic and I’m not sure how well pools would actually work out (but I guess we could tweak that in code if we’re not satisfied), so I’m waiting for feedback from others

I like this idea but one thing i would add is that this wouldnt require much in the way of map changes. Removing the patient rooms, cryo rooms, sleeper areas, and surgery observation would leave plenty of space for a lot of such pools.

While I like the idea you have quite a bit, my focus with this specific PR is not to make medbay more complex. The focus is two part; first is merging two remarkably similar machines into one, second is removing infinity from the equation without dramatically impacting current gameplay.

This is not really creating one new machine with overlap so much as this machine is intended to replace two machines.

Compared to sleepers - all the same chems are immediately available through a near identical interface - they’re just no longer infinite and upgrades are tied to a chemist rather than part research.

Considering i see chemists walk to the pool basically every round and just drop a beaker of SF into the pool. His idea doesnt make medbay more complex.

because in my testing healing through pool synthflesh is really slow and inefficient. pool filter also can’t even hold very much and it’ll be exhausted by a guy sitting in there for just like a minute or two

I never said it was efficient or gave a reasoning. XD People must think its effective.

Also i think it actually depends upon the size of the pool. We might want to test that.

I wouldn’t say complex since we’re not really adding any new mechanisms, we’re using things that are already in game. Its more of making doctors pay attention and check on patients instead of just clicking button or two and being done since nothing wrong can happen from this point

In theory pools would achieve what you want. Chems in them would not be infinite and upgrades would be tied to chemist. Using them for cryotreatment would be as easy as putting Cryoxadone and setting temperature as low as its needed.

As said, I’m not playing medical so I’m not pushing this idea since I’m not competent enough to say how healing players should actually look like, it just kinda seems to tick all the boxes in my mind. I just looked at the problem and asked myself-what do we have already in game that could work in similar way and half of what I came up depends on tank holders which are made specifically for medic, doctors are already familiar with them 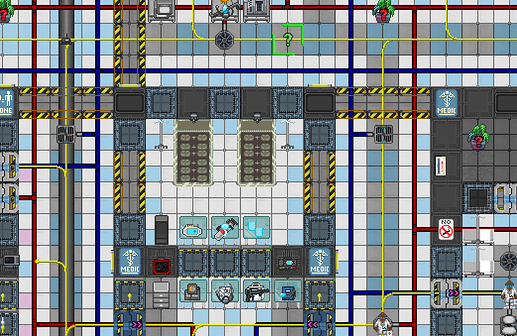 One thing is sure, we can have it mapped in no time, without need to make sprites and to invent something new. Possible tweaking how effective chems in pools are would be needed but I can’t imagine that being too complicated, would probably require changing a value or something like that, but someone wiser who understands Matrix would have to actually take a look at code and tell us how all that really works

Giving that I am from TG (with the infamous medbay rework) I must say that I think medbay is a little bit too easy here. That does however not mean the items should be removed.
Removing things is usually bad from a game design perspective, it would be better to add more injuries and illnesses et cetera that require more intensive support than just putting someone in the tube for a bit.

That was surprisingly fast. And it actually looks good their.

If only i knew how to even get the maps much less edit them.