Make HoP's and anyone who gives out all access valid, not only bannable

It wasnt the same round but its always the same on LRP; any attempt to enforce space law will inevitably lead to a bloodbath

i think making some kind of stipulation for getting AA on low-pop lrp rounds should be something as follows;

if there are no command staff on, you can break in and take AA; getting AA now makes you defacto captain and responisble for making sure everyone else doesnt also get AA; you now have defacto HoP duties and should act accordingly; giving AA to everyone inadvertly makes the game easymode for any antags with steal objectives

Everyone having AA every round gets kinda obnoxious, not gonna lie. Hacking tools basically become unnecesarry except the 4 doors you need to hack to get to caps locker.

Mass AA ruins the round.

u know what else ruins the round? DUMB BITCHES THAT CAN’T DO THEIR JOB

“You saw the title”
Yeah I did. I thought you were smarter than that. Apostrophe? In a plural? For Shame.

But seriously guys, As I said there is only one reason I made this thread and its in the title. If I can just kill the HoP it wont cause much of a problem. Today I had to fight HoP and the other people he gave all access. Surprisingly I did die which doesnt usually happen but thats besides the point. If I can kill HoP he wont be able to led an army of the people he gave all access leading to unnecessary deaths

As far as I know the HoP can’t just give out AA so they can raid the armory and overthrow security (as non antag), even on LRP. @Ruko thoughts, please?

You pretty much nailed it. Distributing AA is against the rules even on LRP, but during particularly lowpop times it’s overlooked due to players needing excessive access in order for ye station to function at a basic level.
I would say the round he’s referencing wasn’t low enough pop for such though

I was actually on during the round he’s referencing yesterday, but I was deadminned so I could focus on playing AI. He defended the armory while the players booed him and was eventually killed on the shuttle in a major scuffle. I was involved with the scuffle on the shuttle so I had to ahelp and pass the situation on to the other admin available at the time. 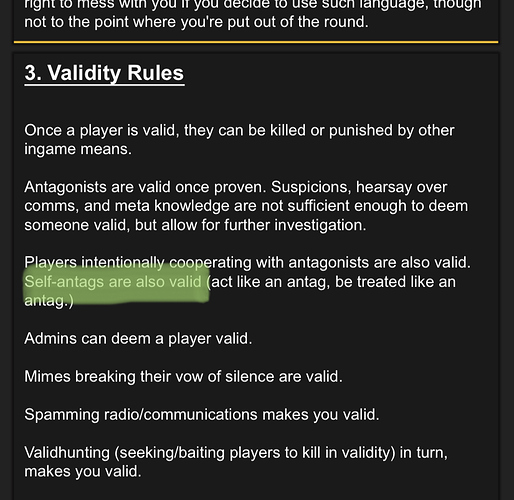 Distributing AA indiscriminately is self-antag, so what you’re requesting is already the case, it’s just also against server rules.

Mass AA ruins the round

When there are enough people to keep the station functional, I agree.

When population is single digit, the round doesn’t even have a flow at all and AA is really the only way to keep the station functional - none of the other four living people are likely to have any interest in doing research, powering the station, killing mice, etc.
If something needs doing, you do it yourself.

There’s not alot that plays HoP and i personally think that we should buff the defenses which are the walls around caps, breaking into caps is bit tooo easy. I mean,2 fake walls and you’re pretty much in.

If there is an actual captain, all he has to do is pocket the spare ID and defend himself. Mutiny against the captain is a capital crime and the captain can authorize captial punishment.

It’s only an abuse of power if the captain is being a massive dick about things and trying to bait people into attacking him or trying to write his own laws - if someone attacks the captain for no reason, they better like salad.

As a wannabe admin on LRP I’ve experimented a bit with the captain’s ID rush.
While the spare ID tide isn’t directly connected to people who give AA out, I feel it’s still quite relevant due to a point at the end of my post.

Examples of the above include hiding it in a random location, making it heavily guarded, or even replacing it with a cow that opens doors. One time I got approved to give the person who gets the ID objectives that turn him into an actual captain (protect the crew, maintain the station, etc).

What I’ve learned from doing this is that people don’t mind at all to have to invest some actual effort into getting the AA. On the other hand just removing it or hiding it was met quite badly, and any idea of forcing responsibility was outright hated.

In conclusion: the captain’s spare should be placed in a heavily guarded location that requires great skill and maybe puzzle solving to get to, instead of a few doors and one locker.

Sadly this wouldn’t stop people from giving it out, but maybe if getting AA was harder to begin with people would take command positions more seriously. The typical excuse for someone playing an AA dispenser is “people get it anyway”. And it’s not a false excuse…

Having it while pop is >20 should probably make you valid if you are not a head of staff acting cap.

put the spare in the AI upload, covered by turrets

You are a great admeme can’t wait for you to be able to do fun events, imo there are antags/modes that happen at mid/ high pop that need AA to combat i.e ops/monkey and for midround shit like xenos/blob.

Were said assistants part of the meta gang? If yea, you valid bro.

If it’s bannable can I adminbuse the hell out of any HoPs giving AA when I get full powers?
thunderdome for everyone to watch him get assaulted by like 20 frogs have you seen those fuckers attack. and then start playing "It’s not easy being green for music"