Make doing something not included in your job illegal

So I was a chef and really did lot of food here and there only to see crew not eating at all most of the time. Turns out cargo has set up their grillhouse and crew goes there instead giving me the grill tools to make food.

this made the shift really bland most of the time and sort of hurt when you work hard only to see someone doing your job because its better for him. 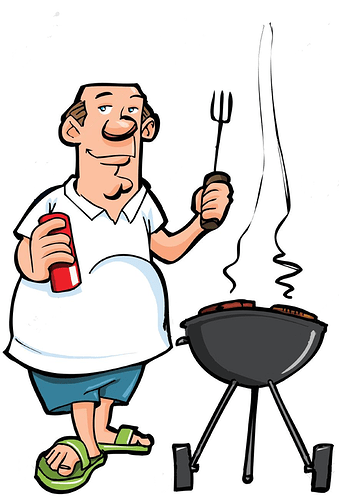 maybe their food was just better?

maybe their food was just better?

Making it entirely illegal is a step too far, but I wouldn’t say he doesn’t have a right to be annoyed when people do things like this.

Remember when xenobio had the crossbreed to shit out 5 food items every time it was injected with plasma? So many times xenobio players would use it right at the kitchen basically removing the entirety of the chef’s job just because they can.

It is why to make them useful I tell them to bring stuff to slaughter. but to just right spawn up food or drinks ruin the support staff job. Clowns exist with mime to make round fun but seeing borgs or other mobs taking their place ruin their job. Bartender and Cook fun is to spend time doing variety of food here and there. But it just ruins the fun with someone coming in and in single click can ruin their job by spawning tons of drinks and food

Just give the grill to the chef and organize a cookout with him, make some cool RP and involve the service department whose job IS to make such events happen.

It should not be illegal, it should just be common sense.

this made the shift really bland most of the time and sort of hurt when you work hard only to see someone doing your job because its better for him.

This is a open moment to do ROLEPLAY: challenge them to a cooking contest, attempt to sabotage their dishes by asking the chemist to make chemicals like Meclizine (causes vomiting) or Cryptobiolin (confusion and dizziness) and injecting it into food, and other things to spice things up and not just sulk in the kitchen. Though be careful with chemicals, low doses (like a max of 2-3 units) to prevent any chance of overdosing. Also, some of the chems and drinks that botany/bartender can create is also a good option to messing with food. Your fun does depend on the effort you put into it

oh no I wont be doing. Admins currently are throwing bwoinks here and there for funny nonsense and do not want a bwoink for feeding semi toxic food because it is fail RP or whatever excuse they had.

Yesterday I got an admin notice for shouting “revenant” despite everyday everyone every single player shout any antagonist they see.

Yeah because yelling [antag][location] is shitty and why the fuck would your character know the exact name of the purple ghost that sucks on bodies. Doing other peoples jobs is also against the rules to begin with so this thread is kinda pointless.

Dont tell me that. But I really love how it is ok to scream “Antag” by just looking at them and mostly nothing happens unless it is funny purple ghost moment.

Also tell Cargo this. Cargo either do engineering job, Science job or Service job. Like come on yall if you wanted to make drinks be a bartender. This however keeps happening very often when cargo just comes bringing me tons of pizza like its a gift while it is more like “welp no point of playing anymore”

Yelling [antag][location] is shitty and why the fuck would your character know the exact name of the purple ghost that sucks on bodies.

Do we really need to give any sort of consideration to the grief ghost whose only purpose in the game is to softgrief everyone hard enough until a coder removes it?
Like, yeah, revs are not something common to see in the eye of an average spessman, and it is kinda shitty, but I really struggle to give any consideration to any revenant who spend their rounds emping/shocking people around them with little RP.

Meclizine is the only chemical I mentioned that has a OD limit (25 units). If you’re careful with dose-per-food people will get full/go to medbay before they OD.

There is a RP pathway into doing this, here’s short blerp on how this could naturally happen:

Chef begins the round doing their job, serving a array of food and getting a few special stuff from botany. Cargo tech decides to begins a stand selling food via a ordered grill to earn more money/rp/spice up the game. Less people are going to the kitchen as a result, and the chef gets annoyed. The chef then goes through the more reasonable options to regain his popularity; getting more exotic food items from botany, seeing if miners can bring up some exotic meats, confronts the Cargo tech/asks if they would be willing to work with the chef in the kitchen, asks HOP to see if he can get the grill stand taken down, and even tries grilling himself and nothing works. In frustration, the chef decides if people won’t pay attention to his high quality food. He decides he must tamper with his competitions food to either get people to change their mind, or get the cargo tech in slight trouble and have the stand shut down. Chef goes to the chemist and requests (mostly) harmless chems that have symptoms that would alarm people. They go over to the grill stand, talking to people as they inject the Cargo Techs food with the chems. After a few people start vomiting/get confused people start to get suspicious about the food the chefs competition is no more!

RP situations need a natural progression in order to slowly escalate a issue. A reasonable person would go by the book and do easier solutions before slowly getting frustration and beginning to escalate. If a admin has a issue about it, explain how you came to that conclusion with how your character did all available options they could do before escalating to the harmless sabotage. This kind of situation in game would also be a IC issue, as the chems I mentioned aren’t produced often and could be traced back to sec. This situation could lead to the cargo tech serving some time in the brig depending on how good sec are, but again it should be established about how the chef was displeased with the Cargo Techs grill stand so the idea of the Chef sabotaging the food could be made.

Especially the custom ones, just fill it up with donk pockets/booze and people would only have to leave their departments for the evac shuttle

Robotist: Mine because miner only want to fight megafauna
HOP: Cooks and make some drinks because there is no chef or bartender.
Admin: Now I have 2 ban you

And the ban message reads
“Self antag: injected harmful chemicals into food despite not having an antagonist role. Refused to admit they did anything wrong in the ticket. Please take this time to re-read the rules.”

Ehhh
Carthatoline ain’t lethal, really, unless you OD people on it.

Carthatoline is very lethal if you have a lot of it and it is also secretly nitroglycerin.

Out of the chems I’ve personally given the example of:

I just typed up a whole thing about Mecilzine only to realize that it prevents vomiting. OOF

That ban could easily be appealed given context, personally this kind of situation should be allowed (though not abused as a “gimmick”).

Carthatoline ain’t lethal, really, unless you OD people on it.

You still have to be pretty careful with it because ODing can lead to brain damage, which isn’t easy to fix and super annoying to deal with. Though in it’s defense, it has a metabolism rate of 0.4 per tick, so like three units would be fully metabolized in like 12 in-game seconds (if going off the google search-research about how long a tick is in SS13: 1 tick every two seconds). To make my final point here is a poll:

If you suddenly started vomiting/getting sick after eating food what would you do?

“Oh boy, I have symptoms of FOOD POISONING! I should go to the futuristic medical bay where they will surely have a means of diagnosing the cause and subsequently curing or managing this little hiccup in my health!” and then I should get a lynch mob against the guy who made that shit