I am confused about the acting captain policies. I was recently CMO on golden, the only head and thus acting captain. That means I was supposed to get the spare ID and nuke disc, but acting captain does not get additional access to aid in that task. Apparently, if another player beats me to those items, it is enough reason for a job ban, as it means I am not good enough to be a head? I feel I am good at med, but people will steal the ID within 4 minutes, and though its an IC crime I have no sec to stop them. I was also the only medical personnel. I just don’t understand how I’m supposed to juggle that, or why not being able to deserves a ban. I think either remove that responsibility from acting captain, or give acting captain actual captain authority/access.

Apparently, if another player beats me to those items, it is enough reason for a job ban, as it means I am not good enough to be a head?

I was confused as well, but Ruko said that I got one warning, next time it would be a ban. I tried to ask and have him explain it to me, and he kinda lost his temper instead of explaining why that policy makes sense. He said he could do it, that’s all I really got beyond just frustration and anger. He also sent me all the rules regarding heads and explained to be a head you have responsibilities of authority and must be extremely good, but didn’t explain how I am supposed to be better then everyone else that wants the ID.

You’re on golden, use self defense. Chloral hydrate +sulfonal syringe, use with harm intent or a syringe gun.
Also, you won’t get banned for something so petty, and even if you do, you’ll appeal that in a heartbeat.

I’m just telling you exactly what I got told by the head admin. And I could’ve tried to kill, but then they would’ve been allowed to just kill me, and I might’ve died. He said now that I’d been warned, doing it again would be a ban.

did he accidentally join Golden thinking it was Sage, goddamn bruh

Golden and Sage have almost the same rules these days.

Apparently, if another player beats me to those items, it is enough reason for a job ban

I told you that you should be trying to get to it first and you have a headstart due to having bridge access, I never said you would be banned if you failed to get it first but asserted you have the resources available to get to it first if you actually put an effort toward trying.

You acted like you were somehow at a major disadvantage compared to other players when at worst you’re on equal ground to the average assistant.

What can get you head banned is completely neglecting your duties as a head altogether, which is what you opened an ahelp asking me if you could do 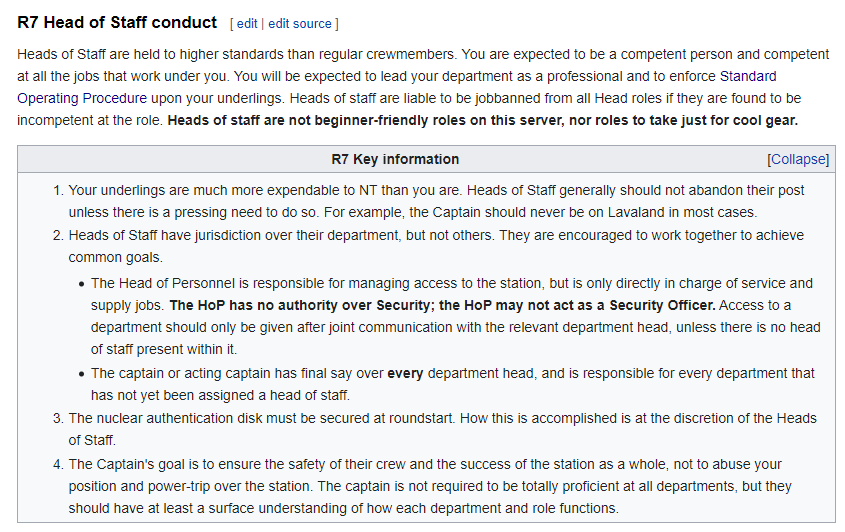 This applies to both servers equally. If you are the only head of staff, you are the acting captain. As a head of staff you are expected to lead the station or at bare minimum, your department - not be taking the role for shiny toys.

I asked you directly in the ahelp, if they beat me to the ID, will I get a ban. And you said now that you have been warned, yes you would. Its in the logs, you are the one twisting the conversation. I am glad to hear that is not what you meant, as it made no sense. That is why I asked you for clarification, and then you got angry with me and did not explain it.

And I did not open an ahelp on abandoning my duties, I asked if I could focus on viro. I never intended to completely abandon the rest of med. But I did end up abandoning med on a wild goose chase after the nuke disc and spare ID.

Ruko: As the only member of command that has been previously warned? Yes potentially.

I didn’t say you would be banned outright for it, and this was late in the conversation where I was continuously trying to drill into you that you are opting in to more responsibility by being a head of staff.

Other things I said before this point as you kept continuously providing excuses:

As head of staff, you are opting yourself into leading the station by default. As it says in the rules, it's not something to take just for extra access or fun toys.

If you are command staff, the first thing you should do is check for other command staff, determine who is going to be the acting captain, and then whoever is goes for the ID and otherwise

You have less barriers to go through than they do, and access to thermite.

The middle one assumes there is no captain, of course.

Lee: Let's say it was high pop, and I didn't secure the disc and ID. Would I get in trouble

Ruko: As the only member of command that has been previously warned? Yes potentially.

I think this is where the confusion lies. Considering the specific context of the conversation, this made it very much sound like if someone else gets these things before me it is a ban. I suppose I misunderstood, but reading it again, its what it sounded like.

As for “continuously providing excuses” as you rudely put it, I was trying to get clarification to understand the new rules so I can play to your standard, and you just copy pasted random bits of rules without ever explaining things to me. I had no reason to make excuses, I was not in trouble. All I did was ask you questions so I could try to play a head properly next time, and I asked you how to do what you were asking, and you got frustrated as soon as I asked a question. I don’t know how asking for clarification is at all the same as making excuses.

And you kept saying head of staff was more responsibility, which I understand and was never my question. My question was how am I supposed to beat a bunch of assistants who have gotten stealing the cap’s ID down to an art form to the ID, and why can’t acting cap just be given additional access. I understand there’s responsibility to being a head, and never asked about that. It just seems like an unfair expectation that if I get outplayed, I get in “trouble”, whatever that means. Also why does acting captain have to break into an area with thermite or anything else, it doesn’t make sense. I would’ve been a great CMO and feel I know med well, instead I’m breaking and entering and trying to figure out if I can take an assistant in a fight.

I also wanna note, I asked about ignoring my responsibilities, I did not actually abandon them. I did my best to try to get back the nuke disc and the ID.

and you got frustrated as soon as I asked a question.

I got frustrated 30 minutes into answering the same question reformed repeatedly.

I don’t get why this is my responsibility.

Because you’re playing a head of staff and them’s the rules.

Most of our exchange can be summarized as the above, except back and forth for 30 minutes. Yes I’m going to get frustrated at some point during that.

There was only once you asked how to beat people to it, and I gave you tips, as CMO, on getting to it quickly.

I never intended to say I didn’t understand it was my responsibility, if that is what it sounded like.I think this whole thing has happened because I worded things badly, I’ll confess to that. All I ever really wanted to know, was why can’t we just give acting captain access to captain’s quarters at round start if we expect them to enter captain’s quarters roundstart. I was just curious why we would ask something of a head and make it unnecessarily difficult to accomplish. The only tip I remember you giving was that I had access to thermite, but that makes a hole a antag could later use.

I am sorry I was annoying, it was never my intention. I thought you as the head admin were the one to go to with those kind of questions and I was confused and didn’t clearly understand what you meant.

In the future, who should I ask for rules clarification if I am confused?

Just get the axe before them with your bridge access and and use your chemistry access to make thermite to get thru the walls faster than the tiders. As Ruko said, you have a massive headstart to the average tider as CMO, you just gotta learn how to use that headstart. If push comes to shove use a spraycan with lube and/or your telebaton to make the tiders fuck off, the telebaton is actually rather strong. Don’t play heads of staff if you don’t know how to use the tools given to you.

In this case the tider was in and out within four minutes of round start(according to the tider). Next time I will try as you’ve recommended though, much appreciated.

Golden: the place where heads of staff and sec NEED to tide.

Better than relying on rules to protect your ass

Golden: the place where heads of staff and sec NEED to tide.

I know a codebase that has it where it checks for heads roundstart, and assigns the head highest in the chain acting captain giving them automatic captains room access so they can take the spare until the real captain comes online.

Its a really old codebase but might try to port it