bee is dead because of “muh homophobia”. jesus can you retards realize this is the internet

Yeah faggot thanks to u i can’t say faggot anymore

You know this is the internet right?

today it is the n word tomorrow it is LRP and the day after there will only be HRP.

I will not allow LRP to be destroyed, for legends have been born and groomed there.

Can someone tell me what the flying liked fuck happened?
I went to sleep after the MRP crash from yesterday, and I come back today to find a proposal to remove Felinids? What’s worse, somehow the whole council left, the N-Word is banned and apparently the “faggot” too?
Jesus christ what the hell happened?

Slurs and racist speech has been banned from both servers. That’s about it. All that followed was a backlash from the decision.

I did not say anything about free speech I was just showing how he says it can be used against him for how simplifying a person’s argument with just the muh™ something and saying this Is the internet is not just making a strew man of the other argument but not going to change anyone mine and calling people you disagree with retards is not only stupid but show how little respect you have to the other person and making then hate you (maybe even more now) and less likely to change their minds.

But can we please stop fighting or calling each other name just cus of this.

It was fun at first talking part in a riot (the only real tide i toke part in) just cus we can not say the n-word but now I’m getting sick and tired of people fighting over this thing.

We still have fake insults like ligger and shit and if that does not work we can make new ones.

And can we please of all thing keep the political stuff out of this it’s bad enough as it is and just bring that stuff in will make it wore.

slurs are a cultural thing here in Finland… we curse all the time. Vittu, perkele, saatana, jumalauta, helvetti, paska, kyrpä, kusipää, mulkku, urpo, hitto, huora and skeida. Then there are the combinations of swears like vittusaatana and vittuperkele. So we don’t really get the whole “bad words” thing… back during my conscript days the Turks were the Turkish mafia, Russians were commies and the odd black guy was either called the token feller or n**ga. Oh and if some guy accidentally spooned another guy in the tent during field exercises they were usually called faggots for the day.

Vituttelisinkohan? = Should i fuck around aimlessly?

Again I wasn’t here when the whole thing happened. (EU timezone master race)
But couldn’t this have gone through a vote like everything else?
I understand why some people want it, and why some people don’t. I personally dont want to the ban to happen, but I would understand if it happened through a vote.
But this headmin tyranny thing just aint fun.

Always remember, it’s not about what was banned, it’s about how, I don’t care for the words banned, never said 'em anway, it’s just the manner in which they were banned, and lack of transparency. I’ve heard that 7 out of 11 were in favour, I’ve heard that 3 previous votes failed, and that the player council was never even consulted. All of which, were only heard about AFTER the the merge even happened.

Qwerty claimed the council voted in favor of a rule change, but he was lying, there was no vote. Two council members left over the organization that’s supposed to be making the rules being ignored. Qwerty left the server so he wouldn’t have to deal with the backblast.

Meh, I don’t see a huge deal deal tbh. Though qwerty probably shouldn’t have mentioned that.

Ignoring council and most player feedback, banning and muting people on discord while forcing your shitty decision down by any means necessary isnt a huge deal? Also how shitty is that Qwerty ran away from the discord after making the announcement and throwing a couple of those “We dont need anyone who doesnt like this decision” lines out.

I meant the filter, not ignoring the council. Should have actually used the council, otherwise, why do they exist?

there’s also the fact he said 7 out of 11 people were in favour
which uh, if you ask me, doesn’t seem true 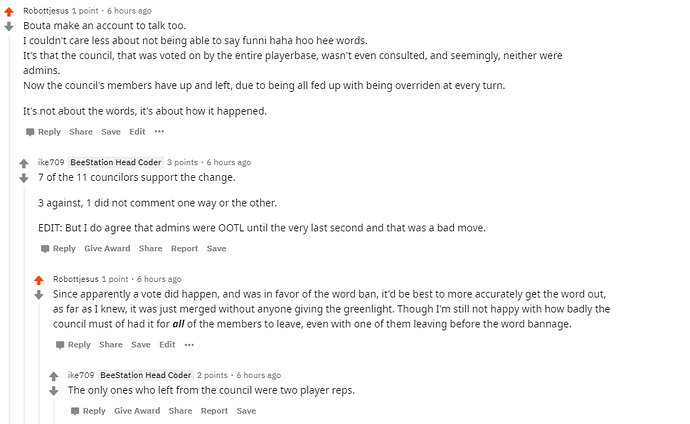 Hasnt it been established by resigned admemes and council that there was no vote.

Even Qwerty slipped it out himself