Incident Description: Some time ago, in my first mentor application thread, there occurred a degree of peanut posting. At first it didn’t bother me, but in retrospect it became evident that this headmin was clearly mocking me from a position of power:

(Thread link for those with access to view deleted threads: https://forums.beestation13.com/t/yorii-deep-dark-past-discussion/12122)

He says it was not with his intentions to dogpile, but when the end-results clearly speak for themselves it doesn’t really matter how well you intend your harassment to be.

After another period of time trying to get him to clarify and hopefully apologize for this dreadful behaviour, I am met with the following reply today: 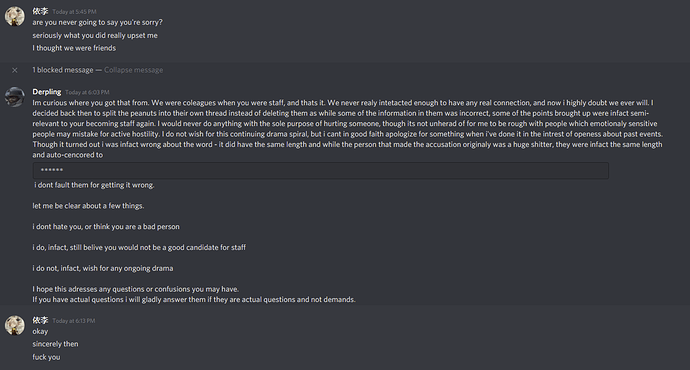 In this he literally and very clearly admits that he was aware of the peanut nature of the thread and posts, and additionally also admits that he knew some of it was clear misinformation and lies.

He also says he did not intend to start any drama, but it is very strange hearing that from the person responsible for starting this drama in the first place.

Additional Information: I never did anything against this person, yet he sees it acceptable to treat me in this unacceptable manner, all I wanted was a sincere apology for his hostile actions towards me but he clearly has no interest in doing so, despite agreeing that he was wrong and implicating himself as being in violation of admin conduct.

This rule is overlooked normally but if you want to dm llol just to get something to report him it’s a total dick move.

I don’t see any malicious intent from llol here.

you didnt input any rules or conduct being broken so what is this for?

That is not at all the case as it was not a DM for any server related issue but simply an attempt in getting an apology over our personal interactions of the past, I was sincerely surprised about his reply and the lengths at which he tries to justify his actions.
At no point in time until after his last reply to me today did I expect to be writing this admin report.

you didnt input any rules or conduct being broken so what is this for?

As for this I thought it was apparent from the words I used, but it relates to admin impartiality and specifically the evident negative bias against me as a person, letting posts that he admits to knowing were false information live on and even move them into a separate thread in order to maintain the harassment, when the proper course of action according to current policy would have been to delete said posts.

my mistake, i thought forums were specifically for game/player related cases not overall community

Of additional note is that I have tried to get an apology over this for the last two months, both in discord channels and in DMs, but until today he has strictly ignored me and not given me a single reply.

I’ve looked through this report and the surrounding context, and from what I can tell, we fucked up in the initial handling. That much is clear. We shouldn’t have ever jumped to conclusions about what someone said and we certainly shouldn’t have called attention to it without doing at least the bare minimum to verify what was actually posted. That’s entirely on us and should be a growing moment.

I do not believe that Llol was making a concerted effort to mock you, however. I honestly believe that this was a mistake and I don’t believe there are any added ulterior motives behind anything he’s said/done. From what I know and from what I can see, this was nothing more than a case of poor handling and judgement. There’s no malicious intent here.

I can’t really comment on the private discussion you two had. While an apology may have been nice, he’s not really obligated to give one. Additionally, you started the discussion in a fairly hostile way and immediately put him on the defensive as a result. There definitely was a better way to approach that one.

All-in-all, we messed up in how we handled things all those months ago, but, since so much time has gone by and your reputation/image hasn’t been subjected to lasting harm (as far as I know), there’s not a lot that can be done about it. Maybe if this report was made a lot earlier, but, even then, I don’t think Llol was acting with malintent. He was already reprimanded when it was relevant, and I don’t believe he’s made the same mistake again.

I’m going to mark this as processed, purely because this was addressed months ago when he originally made the post. But, unless some compelling new evidence comes to light indicating that he really was acting with malintent, no further actions will be taken.