I’ve amassed a few reports on here, and obviously, I need feedback. What is it you really can’t stand about Kat Newton? Are her antics too crazy? Where’s the line here? What level of absolutely silly are you able to withstand in a CE? Any moments you just hated ingame, anything you liked?

Great engineer, I think I played with you on Acacia a few times when I was artifact hunting. The round I had you set up the singulo to eat the blob on the chapel was beautiful, especially considering that was your first one. (If I’m thinking of the right person.) Overall, a great boon to the crew and server environment.

Really though, stop "nya"ing, that’s the furry equivalent of morb-posting.

Yeah, that singulo was awesome. Got it recorded too. It was my first time making a singulo or PA, ever. I’ll definitely tone down the Nya’s. It is funny though, since my character is Kat.

Quintessential Felinid that’s I’d say is competent as the CE.

As for the nya stuff I don’t really mind it as much as others do. It’s honestly something I expect from Felinid in general.

I will say to consider others when making them do things.
Forcing the AI to go Nya can be pretty funny from the outside but the AI player probably isn’t having a fun time. Same with other stuff like spamming messages.

Other than that you’re golden

Edit: all my crossed out feedback is invalid since you nya without a felinid pass. Smh.

Nevermind finish the pipline and be a Felinid.

I quite like having you around, you may be lrp annoying sometimes ( i dont really mind personnaly) but you are really competent and actually lead engies.
And you re fun to interact with, everytime i as cap/hos/seccie RPed with you i had a good moment.

A borderline insane CE, could tone it down with the nya laws, though

Good engineer, but thinks spamming Nya and uploading a Nya law to AI every other round is funny

Also they were just banned for spamming “amogus” in game.

Kat is now officially felinid. Also my ban is temp command ban now. As for the LRP, I will be toning down the Nyas (and nya laws, I was actually bwoinked ingame for that).

Stopped reading after this, Nothing can top this. Kat is going through the felinid pipeline. I can go to bed satisfied. Goodnight Beestation.

You jumped from stage 2 to 6 within the span of a couple days.
This might be a new record in the pipeline. 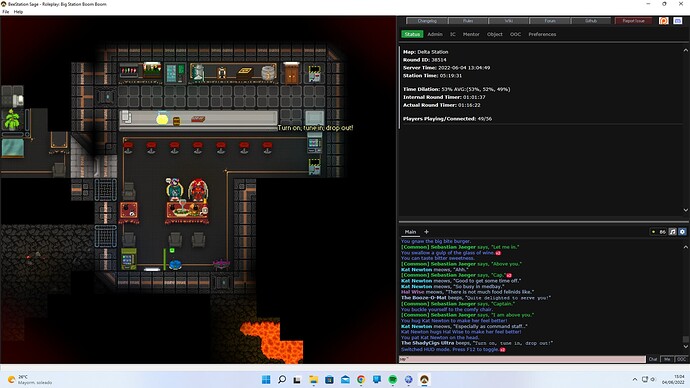 Robust engineer, you’ve improved quite a bit now that you dropped some LRP stuff you used to do.

A story of true love

Now that they have stopped the constant Nya, Kat is a pretty based engineer that knows more shit than most people