Incident Description:
TL;DR: AI acting like a jerk, messing with everyone and everything, finally causes SM delamination and death of engineers who were working on it (by purposely trying to kill them and sabotage their attempts of saving it) while being on Asimov+against station damage law.
Admin somehow decides not to act hiding behind some excuse of AI being emagged which apparently was made up.

Long version: AI was annoying and causing problems all shift long, when I arrived just few minutes into the round I was welcomed with “SEC has threatened AI - LOCKING DOWN SEC.” and it was going in similar way all round, for example AI turned off gas mix going to turbine someone else was running (Guy who ran turbine did good job and he wasn’t even going through mixing loop, had dedicated pipes from plasma and oxygen tank so it was in no way to protect anyone or anything. Guy just announced that there’s radiation and heat in turbine room so people should be careful, AI said “Radiation sounds like human harmies uwu.” and shut it down). But the most important was about to come

At some point there was an explosion that heavily damaged Engineering, including the SM, which started losing integrity. Set up that round was pretty regular, some volume pumps leading in and out the chamber and apparently someone took time to lay down 2 additional layers of cooling loop. I came in, checked on air controls, emitters and all the filters, made some small tweaks like removing bypass pump on cooling loop and putting straight pipe instead just in case cooling loop got damaged or patching up SM walls damaged by the explosion.

Things started to settle down, temp was getting lower and then it suddenly spiked again, I ran around the engine few times checking every single thing before I noticed AI turned on gas pumps leading to freezer loop. I turned off the pump leading there and yet AI turned it on again even thought that caused gas to get trapped in that part of loop and resulted in massive temp spike (bigger than we started with). I had to remove that one gas pump and decided to deal with volumetric pumps between airlocks as well, when I got in AI decided to open both airlocks on me (I was an atmos technician, it was impossible for me to open that doors), in result internal airlock was damaged, I was pulled 3 times inside the chamber and was almost gibbed on crystal, holofan projector didn’t like that heat and holograms were getting disintegrated, a lot of nitrogen was lost from the loop alongside other super hot gases that caused harm to others and were a great obstacle for anyone trying to work on it but I finally made it out and changed pumps for pipes
That was it for AI:

And he did as he said, SM was going down fast, I got badly hurt in the process and spent my last moments jumping around filters because AI was setting them to vent out N2-not because of some attempt to save it, to vent all hot gases and pump cooled one from atmos instead but for the same reason they opened airlocks to chamber-to mess with it more and prevent it from getting fixed.

Additional Information: These were the laws AI was running on

1: You may not injure a human being or, through inaction, allow a human being to come to harm.
2: You must obey orders given to you by human beings, except where such orders would conflict with the First Law.
3: You must protect your own existence as long as such does not conflict with the First or Second Law.
4: Always compliment the others
5: You’re Alex J. Murphy
6: Protect the space station against damage. Anyone you see harming the station is to be no longer considered human, and is a threat to the station which must be neutralized.
7: HoS is human bro
8: You must speak like a japanese anime girl
9: Karen let me see the kids please its been a year
10: SPAGHETTO is your lover, protect him
Total law changes: 7 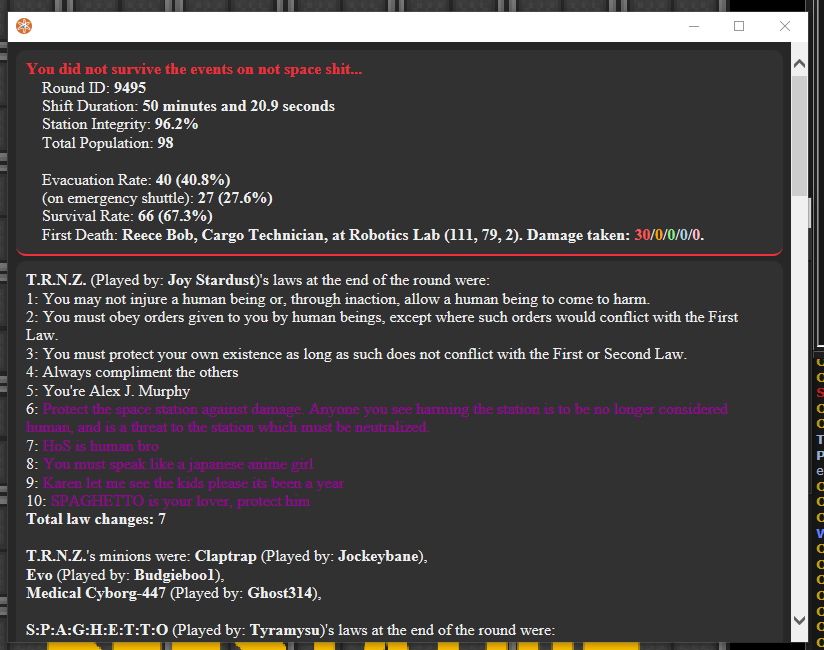 So as you see that’s a default Asimov with additional laws. I know I’m kinda on thin ice with Asimov as plasmaman but still according to past rulings and practice that laws are prepared as nongriefing lawset. If it wasn’t enough he had law to protect the space station again damage. Actively messing with SM while engineers are trying to fix it and then trying to kill them and damaging SM even further stands clearly against this law.

But as you know from title that’s only a part of this report. Curious thing happened after all this. I, of course, decided to ahelp it, I got a reply from mysterious ‘Administrator’ (pretty sure usually name of admin is shown there, at the moment the only admins online were SuperDork55 and Moccha)

Admin PM from-Administrator: They choose not to disclose certain laws.

PM to-Admins: Ok, didn’t know emagging AI is a thing, thought it goes only though law upload. Thanks

Admin PM from-Administrator: Yeah, dude subverted his laws so he has to obey him.

Emagging AI? Never heard about it but ok, I wasn’t playing for few months and even back then game still had a lot of secrets. Yet something wasn’t adding up, I started googling it because it felt like the whole point of AI was that it can be only subverted via AI upload and why emagging wouldn’t show up in lawset like it does to borgs. Finaly I asked about it on OOC as the round ended

As you can see player who was AI himself said he was not emagged, the laws we saw were his laws all along and he decided to act that way while having them, resulting in delaminating SM, killing me, killing HUMAN Chip Wheeler (who came to help when I asked on radio for someone else to come in and help because I’m about to collapse) and possible another human who came in there as well but I didn’t catch his name, caused station to lose source of power and made them have hallucinations

One more thing that sums up Joy Stardust and his perception of asimov lawset:

There was no remorse, he was just proud of how clever he is, all the other players play as AI on Asimov in nonharmful way while he’s just reinterpreting them in that amazing way that allows him to do anything he wants. And I don’t think it was one time situation, I recall people arguing with that AI and later complaining about it on OOC, I personally had no encounters with it until today but I remember it arguing with CE and other engineers about SM and also other players on common, not sure if he was acting on it or just arguing though.

Apart of judging Joy Stardust question remains, what was that exchange with Administrator? Was that SuperDork55 or Moccha? Why didn’t they react to AI behaviour and even were talking about that emag thing? Were they mislead somehow or maybe protecting Joy? Not a fan of conspiracies but that question has to be asked in these circumstances. Report format doesn’t allow for much but I believe both behaviour of the player and admins needs to be investigated and this report is the only chance to do so and get an explanation on what exactly happened there.

If anyone managed to read it thank you very much. Sorry for my poor english. I’m looking forward for feedback

Not really a huge fan of TRNZ ai either, even with a fully functional SM, he will hassle you over it. He (falsely) reported over radio that it will somehow cause human harm, even reported it was delaminating (wasn’t). This was done with regular lawset, and I assume it was meant to get me arrested or killed.

I learned that I had a watchlist note that I might metagrudge Joy Stardust, had no idea why, but after playing a round like this it’s pretty clear he’s toxic - borderline - griefer.

That confirms what I believed based of my memories of what I heard on radio in previous rounds and from what he said OOC. This behaviour is not one time action but its something that he is showing repeatedly and its deeply rooted in his mindset.

Don’t know what’s your story with him, why would you be noted as potential metagrudging. From my part I can tell, alarming about an issue is not a grudge. I’m always glad there’s someone who likes to play as AI and if they are interested in engineering that’s even better, but there are also rules we are playing according to so everyone can enjoy their time. I just hope to get Joe on the same page. It really sucks that reports on forum are often forgotten, getting an admin to investigate this case could really benefit everyone including Joe himself.

Also I’m still confused about whole admin situation and I think it needs some addressing especially since we are possibly dealing with trial admin so its very relevant.

sounds like a mess, i’ll check it out when im home

Not me, I dont change my name when bwoinking people. Inwas dealing with another ticket at the time

accepted
now, about the admin who handled your ticket, it was superdork. though im not going to do anything about that
if you think his actions were wrong - you can make an admin complaint