Which server did the ban happen on? Sage

Ban Reason: As an atmos tech, set distro to dangerous temperatures to kill lings. Station temperature quickly became uninhabitable. Ahelped asking if it was okay to set the distro to temperatures exceeding the boiling point of water, when told no did not undo their mess and continued to heat distro. Later pumped tritium into the SM without telling anyone, including the CE.

Appeal Reason: The banning admin got the facts wrong let me set it straight, There were lings on station and headspiders so i thought it was a good idea to heat up the vents so the headspiders would die while hoping that the station wouldn’t heat up too quickly when the heat in the pipes was around 1100 Celsius i Ahelped and asked is this okay is this actually gonna work they said no and said to heat the scrubbers instead so i reverted the heaters back to 20 Celsius,

Now unto the second part, I made trit for the sm to give it a little kick i went into the sm chamber with trit canister pulled and went to the north side of it and decided to upgrade the freezers and utilize them to cool the tritium in which i was only gonna use a small amount so say 5% trit and 95% n2 anyways i upgraded the coolers and then saw the coolers were disconnected from the loop so i turned off the filters so i wouldn’t have any leaks expecting i would have it complete in just enough time so it wouldn’t deflam it wasn’t and the sm started deflaming. I DID NOT PUMP TRIT INTO THE SM, I was gonna ask the CE for permission once i had everything ready so the trit coolers ready the filters everything, was the way i went about it stupid yes i should’ve asked the CE before i touched anything but I DID NOT HAVE ANY HARMFUL INTENT.

Anyways thank you for reading this long mess of a appeal i have class right now so i sorta rushed it, Thank you

Additional Information: Just as a final note i do not want Winter Darkraven to recieve any punishment they’re a new admin and theyre still learning the ropes and how things work i was talking to someone about how the logs works and they said the logs arent live so you need to close and open them to refresh it

They’re not, because I was there, and I told them to ban you.

Bro you only got jobbanned for 7 days why appeal

Because this Note is bullshit

Timestamps of cooler changes and timestamps of the end of the ticket where they agreed to change the temps. Nobody ever turned the temps back up either - coolers just take a while to work on such a large volume of gas. (Distro is primarily pipes but it is a LOT of pipes)

Looking into the tritium claims now.

i Ahelped and asked is this okay is this actually gonna work they said no and said to heat the scrubbers instead so i reverted the heaters back to 20 Celsius,

You did ahelp, I am thankful you contacted me. But, you did contact me AFTER you already heated distro, which I forgave and expected you to fix once I told you that heating distro was a poor idea.

When I checked on the heater, it was still on heating mode and distro was still around 300c, the melting point of lead. This is when I noticed your history and contacted one of my peers to get their opinion.

so i turned off the filters

Timestamps of cooler changes and timestamps of the end of the ticket where they agreed to change the temps.

It wasn’t a cooler, it was still a heater. Someone else changed it to the cooling mode but I am unsure if that’s logged. Thanks for helping, by the way. It does show they tried to fix it.

It wasn’t a cooler, it was still a heater.

They are the same machine. It’s literally called “Thermomachine”. This is a slip of tongue on my part, so apologies for the confusion.

Double posting because thread is active and my edits tend to confuse people:

Disabling cooling on an SM for even a short time can have catastrophic results on the SM unless the emitters are disabled and the SM is given time to “power down”. For a while after the emitters are turned off, the SM is still energized and takes quite a bit to calm down.

If you turned off the loop (especially the filters) the SM chamber will quickly turn into a vacuum because the air filter is still trying to push air into the cooling side of the loop + pull air from the filtered side. A vacuum causes the SM to go into overdrive because the % concentration of plasma skyrockets when the only gasses in the chamber are the ones the SM produces. This very rapidly turns into a high-pressure plasma fire and then a tritium fire once the newly produced tritium starts to burn.

All in all the story adds up. Logs can’t verify whether the canister was dumped accidentally or not.

Even with the story making sense, this is two counts of rather major incompetence. I don’t think a short job ban is totally unwarranted, even if the note/ban reason should be updated.

Understood thank you Ruko,
The main thing i wanted to do was to clear things up and show that it was a mistake and not that i was acting out of malicious intent, And with this note cleared up Im happy with the result as I’ve learned 2 very important things about atmos and the SM thank you

For future changes to any SM, there’s two ways to monitor the SM via technology - there’s a console somewhere in the SM portion of engineering with supermatter monitoring pre-installed, and every engineer starts with a tablet capable of downloading the app. 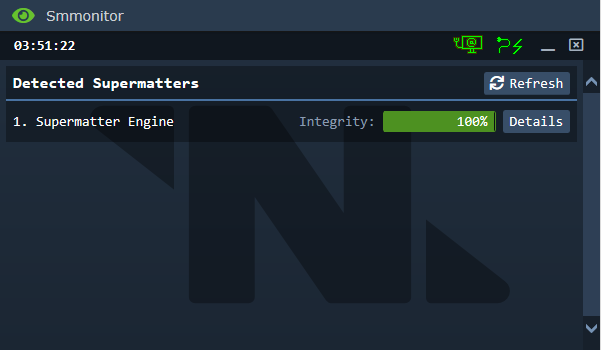 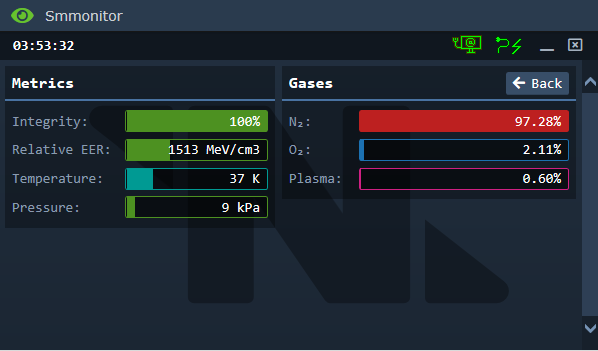 This is your best friend when it comes to monitoring SM stability and integrity. If you want to make major adjustments to the loop and have to power down the SM, the first thing you do is turn emitters off, and the second thing you do is start at this monitor until Relative EER is below at least 100.

Once the SM is first started, it will never completely stop, so while the loop is disabled you’re working on limited time.

You’ve proved your actions weren’t malicious to me. The ban has been shortened to three days for incompetence.

Try not to toast the server, again.