Step 2
One acquires the needed tools, and selects an assembly appropriate to the task. In this case, a tiny assembly might have done the job - but perhaps one would want to leave room to give additional functionality to the flashlight in the future - so a small assembly does the trick. There isn’t one in particular that looks like a flashlight, so we’ll just go with “Type-A”.

Step 3
Now that we have an assembly, we need to fill it with components. One should carefully review what components might be needed, and all of them before editing values, or wiring. This helps give a more complete picture of the finished device in one’s mind. In my case, at first I selected a simple Light component, and then replaced it with an Advanced Light - to demonstrate value editing. One might also have done this, to expand the device in the future by allowing the ability to select the light’s color. I also initially fudged things a little by adding a toggle switch, instead of a button initially - thinking that the light being on or off would rely on a Boolean value - which it does not.
Be sure to check power consumption on your device, by roughly totaling components. In this case, power consumption is far less than 1 Watt a second, so a Photovoltaic Cell component will provide more than enough power.

Pictured: The Assembly with the described components inserted.

Step 4
Now that we have our components in our assembly, we should look to see if any default values require editing. One does - in the Advanced Light component. We should edit the “brightness” variable to its maximum - 4.
To do this, one takes a Circuit Debugger in hand, and uses it. This will bring up a menu, with one of the options listed as “Number”. Selecting this will pop up an input box. Just type “4” - without the quotes, then submit.
With one’s tool still in hand, select the assembly to open the assembly interface - if it isn’t already open.
Then, one selects the “Advanced Light” component, remembering to keep one’s Circuit Debugger still in one’s active hand.
Then, one clicks the variable in the Data Input Pin, which is highlighed in green below.

Pictured: The Button component, with click-target for one’s Circuit Wirer highlighted in red. 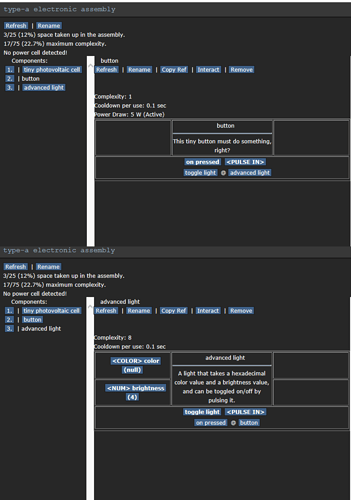 Step 6
Insert a Power Cell. I inserted a High Capacity Power Cell, which is unnecessarily large.

Pictured: The change to the assembly menu interface after a Power Cell has been inserted.

Step 7
Use a screwdriver to close the assembly, and test. In this case, I brought the device to a darkly lit area of maint - and used it in-hand. If one has only inserted a single input component that requires player interaction, when the device is used in-hand, it will automatically activate that component. Otherwise, a selection menu will be given to the player.

Pictured: Success! The device’s Advanced Light component has been activated by the button.

Step 8
Save your device’s code, for later production or further work on it. Use a Circuit Analyzer on the assembly to do this. Copy the given code, and paste it to an external text document, save it onto your computer.

Pictured: The output of a Circuit Analyzer 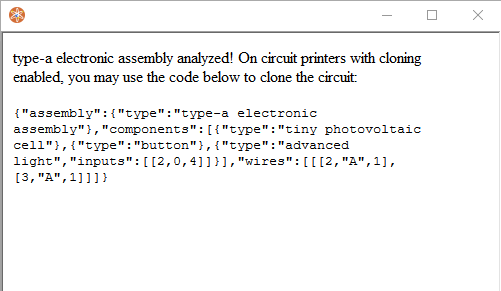 Copy paste? What? I picked a flashlight since it’s very simple to explain, and illustrates the concepts. Oh. You mean instead of learning how to do things properly, just using other people’s designs. I mean, yeah, I guess. If you want to be a smoothbrain.

You mean instead of learning how to do things properly, just using other people’s designs.

yes that is what I mean, I just copy paste shit unless there isnt a copy paste for what I want

Well, yeah. A viable option. But, I made the guides for people who want to learn. It’s more or less finished now, with some final touches on specifics, spell, and grammar needed - but meh. I think I did a good job.

whats the most op shit i can do with this

With a flashlight? Menacingly toggle it on and off at people.

Integrated electronics overall, you mentioned it can break the station.

TELL ME the best thing to just that

Read the guide, and figure things out for yourself. I’m willing to do some hand-holding while I’m on server in Science, and doing Circuits - but that’s about it. I’m willing to answer more general questions in the appropriate thread. I didn’t create these guides with the intent of just explaining the most efficient way to fuck people up, I created them with the intent of fostering creativity, and to allow people to dream up their own ways to most efficiently fuck people up.
tl;dr - don’t be a script kiddy.

Here, this should help. Apologies if I came off as dismissive. It’s just - that attitude is exactly the kind of thing I’d like to avoid. “Tell me exactly how to do the thing so I can copy-paste it” isn’t a great way to approach this module, even if it is valid.