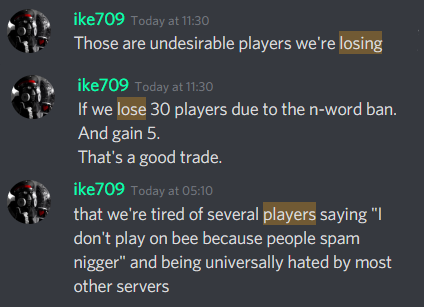 What a fucking joke.

Unironically pushing a change because you and your buddies want it rather than letting the playerbase choose.

But of course you knew what way they would vote so you skipped around it and kept it secret for months apparently just so you could have it.

Make this a fucking server vote and end this charade.

what next you can’t say ligger like on goon?
can’t say retard because it might hurt someone’s feelings?

why are we turning bee into libstation13

apparently you can still say ligger and nyagger

The reality is even those who are upset by this change are the minority. A very vocal minority. The amount of players that connect to Bee regularly are much higher than these people.

But even if they were the majority this doesn’t make them right. There are countless historical examples of the majority being wrong on issues. Angry mobs are almost never right and this is what those upset by this change has turned into, a angry mob. I’d rather do what is genuinely right than to follow the mob.

That is your opinion and I respect it. However, you have to understand that this is a community based on democracy, we use votes to decide on things rather than hoping a despotic individual has a nice day.

You may be right but at the end of the day you can’t deny that If you’re the vocal minority then your argument would be turned against you.

Don’t you realize that this can also perfectly apply to your own point of view? You are holding the moral high-ground by saying, you and everyone else, that racial slurs and what not should be banned because it hurts people’s feelings… You ARE the majority in this.

Ever considered the possibility that you are part of the majority and that your majority is wrong? That maybe this will do nothing but restrict freedom of speech and create an atmosphere of limitation and imprisonment without ever ending the actual issue, racism?

I don’t think that the n-word was said as much throughout the whole life of the server as it did in the last 24 hours. People who want to be racist will just be racist and say other words or make them up. People who don’t just witness their favorite server devolve into a tyranny because one guy took offense and decided to bypass the whole community.

But hey, maybe tyranny is good when it does what you think is right?

Regardless. The whole issue did not stem from the ban of the N-word. It’s how it was decided, announced and implemented that caused all this.

The only joke from my point of view is that players can’t handle being censored on a newbie/child friendly server.

I’m 100% behind Ike on what he said, the players lost by this change are not players that should be kept around anyway, the overall quality and maturity of the server will skyrocket and with that our population will grow over time. Hate is always wrong, majority or not. No server should be known as a haven for people who can’t handle being told not to throw slurs around.

I do understand being upset that this bypassed the council on principle alone, but this isn’t something that needs a vote to be passed. It’s considered common decency not to use slurs in most of society.

I don’t care about your feefies on the matter. If you’re going to make a argument thats based purely on your current emotional state then you’re a walking satire.

You can pretend that you have a moral high ground here all you want but that doesn’t change the fact that we were lied to and our opinions disregarded.

Leftists are the bane of democracy.

How about the atleast 8 admins that have quit over this? Do you want like atleast a 3rd of the staff gone over some stupid un needed thing?

So Democratically speaking, you believe the south should have had the right to secede and continue slavery because the majority wanted it? That’s exactly where we would be if the opposing side didn’t bypass democracy and force them to change even though it wasn’t what the majority wanted.

This is exactly what you are advocating for the server - Democracy for a morally depraved standpoint. Democracy is not always right, and does not justify everything because the majority supports it.

You realize that the only reason you’re even posting here is because you want to defend a change you want despite it being tyranical.

If you believe in freedom, you should support democracy and not tyranical decisions.

I don’t believe in total freedom, I believe in checks and balances. Democracy believes the majority has freedom and power and anyone that isn’t the majority can get fucked.

There are times it is appropriate to bypass democracy, and a ban on slurs was definitely one of those times. Democracy does not function without checks in place to bypass the majority when they are wrong.

You feel you’re right but you’re only an asshole who tries to push your own thing onto others.

You think your opinion is more important or something? Fuck off.

I’m fine with the filter itself. I don’t say funi haha offensive = clever joke so it doesn’t affect me.

What I do raise an eyebrow to is A. That it was on the LRP server which is kinda where the oogas go to unga bunga in peace so why poke them and b. The implementation could have been a LOT better.

so basically your thoughts are

Speaking as a player…
The bypassing of council is bad. The filter, however, is a good idea. After the vile storm in general last night, I feel like it is required for the server to become better. That and losing the funi word is like…

Is that the hill we’re going to die on?

That is the hill that