Got understandably banned for plasmaflooding and not explaining why, so heres why

Ban Reason: Self-Antag - Released 5 plasma cannisters in halls and R&D as non-antag. DC’d after giving non-serious reply to bwoink. Has a previous ban for plasmaflooding. Auth by Azlanon.

Appeal Reason: i am suffering from severe speccemen withdrawal, will die in 7 days if not unbanned, would also like to explain why i did what i did

Additional Information: ok gamers here what happened, the station was FUCKED, there were breaches fucking everywhere and, most importantly, there were slimes, i saw a few out in the hallway and even had an encounter with one that i managed to kill using the temperature gun. now, be me, a VERY AUTISTIC greytider, thinking im about to be the most robust lifeform alive. i think “the slimes are coming from R&D, how can i solve the slime pandemic?”. heres what i do, i break into toxins storage, and just fucking open every single plasma tank in there, moving them around research to spread it out. unfortunately, some of the plasma MAYBE ALLEGEDLY leaked out into the hallway. okay, yeah, there was some plasma in the halls. i lit in on fire with a lit welder regardless, thinking that i was doing a service by eradicating the slime menace. keep in mind, im sort of new, and the few previous encounters with slime ive had, my fragile body was mutilated by them, so at the time this was the best course of action considering the temperature gun takes a long ass time to kill a single slime. now, understandably, the admin saw this as a terrorist attack and bwoinked me, saying, “why did you do that?” or something along the lines. and i said “im gonna be honest, im kind of retarded”. now, this was not a non-serious reply, i genuinely felt like the fucking stupidest CRO-MAGNON to ever exist, i was fucking embarrassed due to how retarded it was, and i just disconnected because i cracked under the pressure, my face was HOT due to how embarrassed i was, i’ll never forget it. and like, it was 12:30 and i wanted to go to bed, not explain my autistic thinking process, because i just wanted to do it on here, you know what i mean? there was no intent to grief, i wasnt self antagging, i was just being a giant fucking retard. the note referred to in the ban is when i first started, too, any notes i have after that was not griefing, ask me about it i can tell you, just misjudgement like this one. i mean it’s LRP, mistakes like this happens sometimes. so like, can i be unbanned or atleast have it reduced to a week or something? thanks admemes

did you know that slimes heal from high temps

no i didnt at the time, like i said ive never really fought slimes before or been in xenobio

yeah im sorry dude, i rarely play science because i dont really enjoy the playstyle, i think ive only played like 3 or 4 rounds as scientist, dont think ive been in the xenobio room for more than a couple seconds just so i could upgrade the machines. i just figured burning plasma killed just about anything, so i thought i’d work on slimes too. turns out slimes were the one exception and it made me look like a giant retard. i would’ve used supercooled CO2 if i knew, there wasnt anyone in research or xenobio at the time so i dont think the plasma or the CO2 did/would’ve killed anybody anyways.

Thirty days! Wow, lucky boy, guess you just have low hours and they were lenient for that?

yes, ive only started playing like a month ago so

bump lol, wasnt there 3 other comments here before the rest of them? i dont know if they got deleted or something

The logs show no slimes attacked anyone the entire round (latches arent shown in logs), no slimes talked outside xenobio. There were no sentient slimes.

You opened 5 plasma cannisters, two in hallways, two in science and one in the bar. (orange circles). The only one you lit (bwoink) was the north west one in the hall. 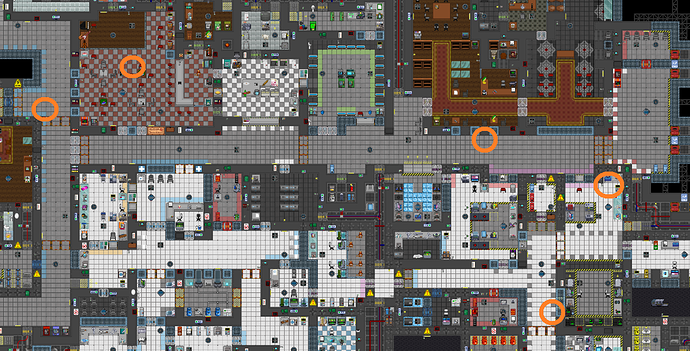 You have a previous ban for plasmaflooding

tl;dr
I don’t see any slimes wrecking havoc on the station, which was supposedly the reason for the plasmaflood.

well, im 100% sure there was an aggressive slime that tried to attack me before i plasma flooded, it was an orange slime, and it was coming right towards me, so i killed it with the temperature gun, and went to xenobio to see if there were more slimes, and there was! every encounter ive had with a slime it’s attacked me, i really dont know what sentience has to do with slimes being aggressive, like i said ive never played xenobio or even been there for more than 10 seconds, i thought they were aggressive even without being “sentient”, like a space carp. now that you told me about slimes being sentient, i looked it up and still havent found a clear answer on what being “sentient” means. ive always thought being sentient ment player controlled, hence the name “sentient”, like how the jungle fever made sentient monkeys that were player controlled. and yes, i admitted it, that i did open plasma in the halls. i guess i didnt really explain why in the post, it was supposed to be a fuse sort of thing, like on a bomb? which is why i threw the welder at the top hall so i could have time to get away from research. i guess i mustve been thinking like that, i was really tired, and i understand that i should’ve only plasmaflooded research because i could’ve just thrown a lit welder in there anyway, because it wouldn’t have fucking exploded or whatever i thought would’ve happened. i wanted to make sure all of research was flooded to ensure that the slimes died. yes it was stupid, and im sorry. it was probably a heat-of-the-moment power trip sort of thing, too. i just had 5 canisters and just had a compulsion to open them all just because i could. i do that sometimes, i guess. the note for plasma flooding was like, a week after i first started playing, and it was a month old. im not a veteran player, i think i might’ve played a server once like a year ago because my friends wanted me to but im not sure, you can go check if you have a way to. i will thoroughly admit that the first note was me just being a griefing shitter, but its only that one, all notes after that i have an actual reason as to what i was doing, with no malicious intent to grief or whatever, you can ask me about them. listen man, if you want to keep the ban, i guess i understand, i plasmaflooded a whole ass hall and even some of the bar just to kill some slimes, and i understand, that was a really, really stupid thing to do. im not really even expecting to be unbanned i just want you guys to understand that im not here to be a griefing shitter, you know what i mean? i dont need a bad reputation as a greyshitting troll just because i make exceptionally retarded decisions in the heat of the moment. i think the lesson ive learned from this is that i go way over the top when dealing with things. overescalaiton, i think its called? i should’ve and could’ve only used one or two, and that would’ve been that, but i had to use 3 more in places where it didnt even matter. i personally think ive learned my lesson now that i know whats been causing me to get all these notes, which is, once again, me overescalating everything. what do you think?

guess you didnt like my reason for what i did, since theres been no update on my notes or ban or anything, oh well, thats fine, i guess, can you tell me whats wrong with it so i can continue to explain my side? i might’ve missed something in that explanation there so my apologies for nagging you about it

Slimes or not, plasmaflooding was not the answer, but since you seem to understand your mistake ill reduce the ban length. re/read the rules, think twice before you act and come back this weekend.