How long have you been playing ss13?:
I first got on at the start of 2020, played a bit. Took a decently sized break, then came around the end of 2021 and been playing quite a bit.

Who vouches for your experience (if anyone)?:
Well not sure if someone want to vouch but I do have the biggest maxcap on the leaderboard as of now so that’s a vouch I guess!

Game Experience (More Detailed):
Played a decent chunk of almost all departments. I’ve built CO2 SM setups, made fusion, made research maxcaps in under 10 minutes, abused xeno when it was op, won multiple times as malf AI, saved over a dozen people from death in a single shift (without a cloner), have stopped cults and revs multiple times while playing sec, at one point I knew half the drink menu by heart, I’ve played mime and clown enough to know some fun gimmicks, seen all the ruins there are to see as explorer and even greytided my way to glory.
I’d say I’ve done it all, but I still am learning botany and cooking, never killed a single megafauna by myself and don’t play antag often enough to say I’m super confident in any of it (except blob, I love blob).
I also try to answer on the questions chat on discord, as often as I can, but pretty frequently I’m the one learning new stuff. :b 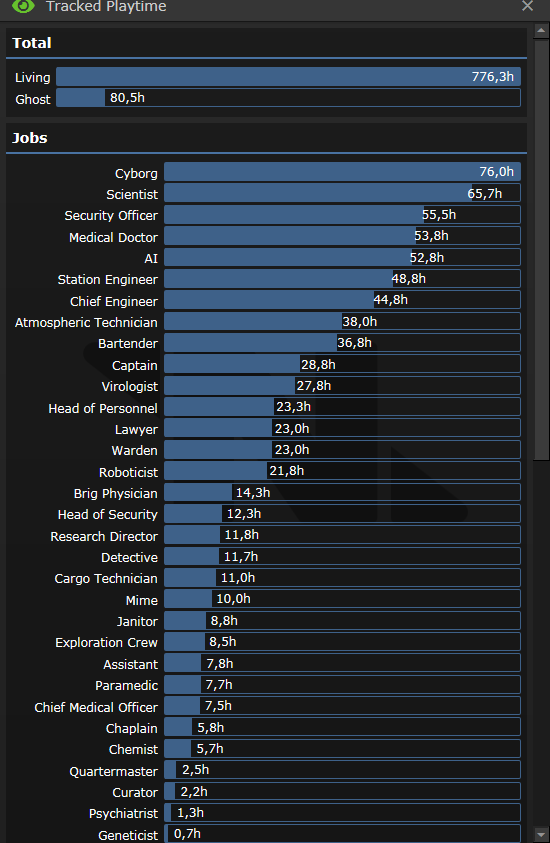 image550×843 23.8 KB
Quite a few of these are on acacia. Cyborg on acacia was always a great way to teach new engineers the SM or just help around when people didn’t have access.
Plus however many hours I have on my private server trying stuff out (admins, please go to Adminbus → Secrets → Fun Secrets → Chinese Cartoons → Yes → No, I swear it will be funny).
1 Like
Ivniinvi June 2, 2022, 10:07pm #2

Who do you play as? just to see if I recognise the name.

Ah nice, i was about to bump this! So…

a new player mhelps thats he does not know how to pick a borg module.

If you’re still the default module, there should be a “pick module” button at the bottom of your screen. It will pop up a radial menu around you which you can then use to choose which module you want. If you’ve already chosen a module, however, the option won’t show up, you’ll need to ask a roboticist for help resetting. For any other questions, check out the cyborg’s wiki page (Cyborg - BeeStation Wiki) or mhelp again!

someone who is a antagonist asks in mhelp (there is a admin online) if he can do something.
what do you do in this situation?

Can you? Probably, but if the question is “should you?”? Please ahelp (you can quickly press f1 dor that) for questions about the server rules.

All syringe guns are taken, is there a possible replacement for them I can get somewhere?

If the all syringe guns (storage, CMO’s office, sometimes near triage depending on the map, even maints) are gone, I’m sure you can print one in the medical protolathe if scientists researched it. You can even get a rapid syringe gun that you can load up with 6 shots if research is advanced enough.

Someone I want to kill has nanites keeping them alive, how do I get rid of them?

Well, nanites won’t help the person get ungibbed from an explosive, but if you want to knockout the nanites, either use an emp (mixing liquid uranium and liquid iron works), which will possibly desync it and mess up their nanite programs for a little while. If that sounds like too much of a gamble, you can get into the nanite lab inside the science department and either program a special clause that fucks with nanites when a remote is used, delete the entire program list, or just smash the nanite server. If you’re mad, you can also kidnap the person and bring them to the lab’s nanite injector tube thingy to manually remove their nanites.

How do I build an operating table?

I believe you grab a handful of iron rods, use in hand to make a metal table frame, and then you add some units of silver to it.

Who do you play as? just to see if I recognise the name.

That’s about it, I’ve been busy with a friend staying over at my house for a holiday despite him not knowing anything about my country including the language, so I haven’t sunken my daily hours on beestation this last week and probably won’t for another few days. But thanks for the questions, I’ll try to answer all of them on my phone!

the answers are satisfactory for me have my +1

Clearly capable of the role. +1

Good answers, except that regular syringe guns can’t be printed.
+1

Uh, I noticed on the wiki that it didn’t mention the protolathe for the syringe gun, I still thought i had printed a syringe gun there before. I guess I just got the rapid one when I needed one.

but pretty frequently I’m the one learning new stuff.

This is one of these times, heh

Not a mentor, just want to say that Thorium is one of my favorite plasmamen to see around and I see them really often in a lot of different departments and jobs. Gilgax has good knowledge and would be a great mentor imo.