Round ID:
< 30204 >
Ban Reason:
< defended myself against the janitor >
Appeal Reason:
< When i came to play ss13 today i found i was banned it said i tried to kill the janitor when all i did was hit him a few times after he started shit first sec took him away because they saw he was trying to kill me. it also says i near wordlessly did all this well what am i suppose to say to some guy trying to kill me other than go away or help in the moment and i what i did say i said running away now i never even killed this guy all we did was fight a bit and i thought fine and logged off that day i dont see what i did that was ban worthy i didnt ruin any role play, i didnt kill anyone even though i could have and then i get banned after i log off franky i think this is nonsense this is a pretty feud at best why should anyone get banned. the core thing that i was banned for was trying to kill the janitor when this isnt even true if i wanted to kill him i could have but i only did what was necessary to keep myself safe the other thing it says it low role play well again what do i role play with someone who is just hitting me. this ban doesnt make sense and i just wanna play ss13>
Additional Information:
< This is my first time using a forum let alone an ss13 one so forgive any mistakes in formatting i may have made i really dont get why i was banned here it happend after the round ended and i logged off but i hope we can sort whatever out and it said i have 42 hours on record as if that was a bad thing? im sorry i cant play 8 hour shifts everyday but i think 42 hours on a single server isnt to bad and in those 42 hours ive been fairly nice to everyone thank you for reading this and i hope this gets sorted out>

Hey there. I’ll go ahead and asign the banning admin already,
but i highly doubt your ban message says “defended myself agaisnt the janitor”

could you provide the actual reason?

I was here for this round and I would like to provide my imput as well as stuff I heard OOC end of round.
(Note: my memory of this round is very shaky. I was a late join and some details may be muddled or recalled incorrectly)
I was a latejoin doctor and ended up working on a roboticist that the Janitor had killed in the central hallway. People were also mentioning in medbay that the roboticist was the second one the janitor had killed. While tending wounds the Janitor came into medbay to attack someone (they had probably just been revived due to the sprite shaking). MDs and sec got involved and he had to be beat into crit to be pacified. Was stabelized and dragged off in cuffs by sec.
The roboticist was revived, screaming about how they were murdered by the jani for no reason. I tried to assure them that the janitor was arrested and then THERE HE WAS in medbay after I said that. I took up a defensive position until the janitor left. (note: at this point the janitor had not said a single word. Medbay was cleaned. He just kinda came in, scooted around, and left. The Janitor and roboticist did not make any contact.)
End of round: the janitor was not an antag, and neither were the people he killed. the round was held up for a ticket (probably this one) and people were discussing the janitor. I believe I heard rumors OOC that he had killed or assaulted 3 people and was randomly laying down bear traps in maintence

someone else kindly posted it here already but here you are, 42 hours, 10 notes and assaulted a janitor near wordlessly, then later tried to kill them with no words or reasoning. If you wish to play here again appeal on our forums and explain yourself. im still banned and i dont see a real reason who do i talk to?

Going purely off of the ban reason here:

Did you attack a Janitor? If so, why?

you talk to ISY the banning admin, be polite and calm hopefully this will get sorted out. Other admins will weigh in and try to make sense of it all but it’s up to the banning admin to approve the appeal

how do i find this admin i still havent been mesaged by them and the ban doesnt make sense, can i reach them? 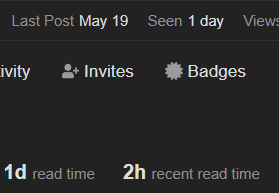 Isy is not the most frequent forum user, it would be great if a different admin could be assigned and/or logdive just in case.

publically that is, they will post their reply here and hopefully investigate and give their side

please do put a different admin on, the on that banned me isnt doing his job and is playing on a different server telling me hes to busy

At this point, I don’t see lsy responding within a reasonable timeframe before this conversation devolves further.