CKEY:
Realityisanything54321
Admin’s CKEY:
Archanial
Ban Type:
Perm
Ban Length:
Perm
Ban Date (YYYY/MM/DD/):
2021/12/9
Round ID:
34588
Ban Reason:
Spambot on discord, please appeal on the forums …
Appeal Reason:
really? a perm ban from everything because of one time I spammed in discord meme channel?
Additional Information:
this ban was made a few days or maybe even a week after i did that post, it was only once on discord

Good to know it wasn’t a bot and you did it deliberately.

Why are you surprised we ban people for spamming?

because it was only once and this is a medium rp server, I did expect some sort of punishment but more of like a temp discord ban, but a perm ban for something I did once on discord seems kind of excessive

All discord bans are permanent.

“I expected temp ban instead of perma ban for breaking the rules” isn’t a good mindset and just proves permaban was right in that case.

The reason I spammed was a joke, people enjoyed the joke, I posted it once, people liked it, I spam it, people say, “that’s quite a few reposts” and then went on with their day, they were not affected. If all discord bans are permanent, then ban me from the discord. also, please state the rule where it says all discord bans are permanent, the rules state. “discord bans MAY translate into game bans”, the joke did not affect the game, I got a message from your bot and then stopped because I realized I was breaking the rules. it was in the meme channel, not general, not anything important, it was just that, a meme, a joke. Please reconsider unbanning me or at least apologizing and make the ban a month or something. Id be fine with that. Also, if you point at my poor grammar, that is no excuse to keep me banned

Hey, I might be missing something really obvious but I dont see spamming mentioned on the discord rules page or the regular game rules page. There is a notice not to spam the PINGS but nothing about general chat spam.

If you are going to permaban over it though I would probably just write in an explicit no spamming rule instead of rolling it under common sense.

thank you, thats what ive been trying to say

so is this rejected or pending? it is not marked rejected but i am still not unbanned. what is going on?

If you are lucky it’ll take around 3 days for you to get a deny or accept, if you aren’t a week or more.

What’s happening is that I am delaying this, in hope that some other admin responds.

Just agree you won’t do it again and I’ll let you in.

If you are lucky it’ll take around 3 days for you to get a deny or accept, if you aren’t a week or more

A bit off topic but I try to handle my appeals quickly.

I do think I remember this:

Your discord user started spamming links to a scam site or whatever. Arch here banned you on Discord over it to stop the spam, then banned you in game. I’m assuming we do this to prevent further griefing because your credentials may have been compromised.

I may be mistaken, but I do remember Arch banning someone from both Discord and in-game for this like a month ago. 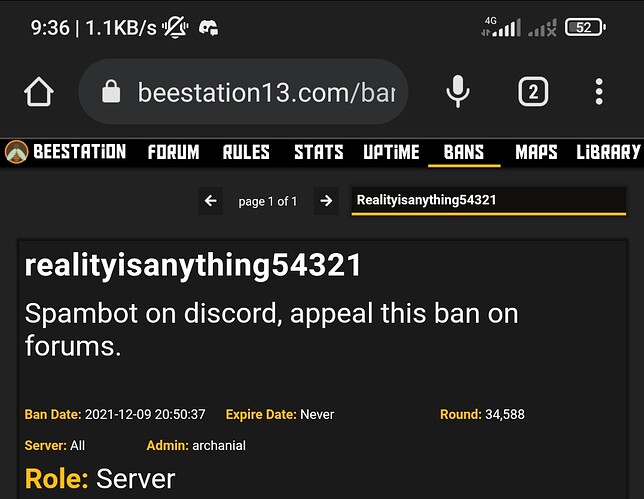 I did not spam links to a site. It was a meme image. I still have it on my computer.
If you count the tiny trademark in the corner then it counts I guess. Also I did not at the time I just thought, “ha ha ctrl v go honk”. All I wanted to do was spam a funny image. I swear I will never spam again. just please show me the rule I broke. also yes that is my ban.

No, you clicked on a link and spammed all channels with a message promising XBOX and Discord Nitro giveaways.

You don’t remember as you probably didn’t spam it, but a spam bot using your account/credentials did. That’s why you were game banned, too. We don’t game ban someone spamming a dumb meme just because.

I found evidence of this and provided it to Archanial.

that might be why my old accounts password was changed AND disabled. i thought it was about an earlier incident in which i spamed an image. thank you for telling me about the incident. iwill now delete my discord account. Could you please unban me now?

I unbanned you from the game.

I presume you don’t need to be unbanned from discord, since you’re making new account anyway?

Discord bans are based on IP not accounts?

Yes the bans are based on IP. If they delete or deactivate the account the ban will still be there.

No response from the author, closing it.

If you want to be unbanned from discord dm me, message me on forums or make another appeal.

This is accepted, you are unbanned from servers.