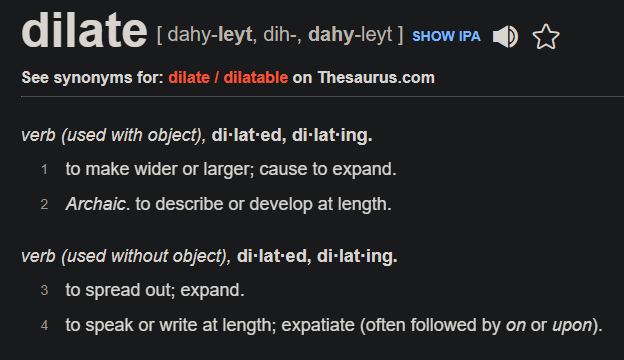 You can dilate any hole.

this discussion is stupid, anyone who has spent literally anytime on 4chan knows what ‘dilate’ means and who its targeted at, any other arguement is arguing in bad faith and should rightfully be disregarded by the admins

Context is pretty important. Its pretty unlikely they were saying something to do with their eyes becoming larger

“her eyes dilated with horror”

yes well done you quoted a dictionary; its also very common knowledge what it actually means in a modern context.

the word “dilate” does not exist anymore, unless it is an insult?

did i even mention those? i simply said what the word “dilate” means

this discussion is stupid, anyone who has spent literally anytime on 4chan knows what ‘dilate’ means and who its targeted at, any other arguement is arguing in bad faith and should rightfully be disregarded by the admins

I would welcome if a new rule came of this expressly forbidding the use of modern internet linguistics. It’s become muscle memory for many online users and becomes really irritating from IC perspective. Newest one is “drip”.

so? dilate means to widen something, when someone says dilate something you don’t immediately assume he’s insulting someone

You mean Netspeak and memes?

new internet slang is fine, just so long as the new words you’re using arent ones that specifically target minorties; not a hard concept to grasp

have you literally ever been on /pol/ or /r9k/ lmao

Is it too much to ask for it not to feel like I’m browsing a chat room.

it doesn’t matter, dilate means to widen something - it always did

‘it doesnt matter, just so long as you completly ignore common knowledge as to what dilate means and instead use this outdated dictionary reference see i am very smart hmmm’

as a non-degenerate, non-neckbeard, how the fuck has “dilate” become – god dammit.

like what context was it used under that the ban happened, was it obviously like “you’re a dilate” or something idfk how these words are used.

its typically used to marganilize trans people undergoing surgery; telling someone to ‘dilate’ as an insult is transphobia and comes under hate speech in the rules.