Mostly trying to make this thread to help consolidate/centralize the issues and solutions for Dynamic mode. Thought about putting this in general, but suggestions is a better home for it and no worries about the thread being closed automatically after just 3 days. I’ll make a effort to make weekly edits to this post that summarizes issues and lists solutions proposed so if you just want to cliff note something you don’t have to excavate through comment threads.

I’ll start it off first for what I think is one of the large issues plaguing dynamic, which is the lack of variety with mid-round antags. It’s somewhat normal now for their to be periods of certain mid-round antags being super common, but that is to be expected with so few options. You can only alter how common something is for so much until the problem loops around because you only have barely a handful of options.

The obvious solution is adding more mid-round antags, with varying levels of intensity in how they impact a round. This though largely relies on either code bounties or dedicated coders to fix issues or help create new antags. Currently I can’t think of much, but just something I think would be fun is adding certain mid-round “antag events” that could change up the round for antags.

Could be things like, “Attention agents, a captured agent has betrayed the Syndicate and is being transported to your assigned research station to be transferred to the closest Central Command Station so they can reveal syndicate secrets. Ensure they do not leave the station.”. This would spawn in a prisoner and two guards with basic non-lethal sec gear, and the prisoner’s goal would be to survive to CC within the escape shuttle brig. The guards would have to make sure that the prisoner is taken to CC alive. All living syndicate agents on the station would all gain a objective of both killing the snitch, and have a ID or some other item as proof that they killed him. Just thinking this is more of a event spawn idea than really a mid-round antag type but it’s still a fun idea that includes the long suggested idea of having a “prisoner” role on the station and to me is a more fun situation for all involved than hunters round removing escapee’s

The obvious solution is adding more mid-round antags, with varying levels of intensity in how they impact a round. This though largely relies on either code bounties or dedicated coders to fix issues or help create new antags. Currently I can’t think of much, but just something I think would be fun is adding certain mid-round “antag events” that could change up the round for antags.

You don’t need to think of new antags. We already have a bunch of antags that simply can’t spawn with dynamic.

It also doesn’t help that dynamic fucks with random event control, which is probably the reason you never see those anyways. You can still kind of get regular random events (see that one random event spawned beno round), but they’re a ton rarer.

FYI it’s not always dynamic that spawns wild stuff. Here, for example. Couple of days ago random events spawned a xeno 24 minutes into the round on 18 pop

Just ad new elements to the round, remember the list?

as a big sentient rat fan, i agree with this post

What is most appalling about the above image is that it’s only 52 threat, which makes that an average amount of threat. That is a very typical spread for a round now, not just an extreme case.

Below is another only slightly more chaotic than average shift totalling 67 threat: 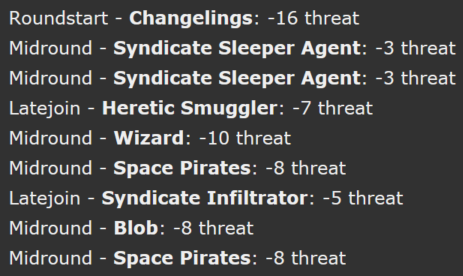 I thought it was negativity bias born from people only complaining when things go wrong, But after really analyzing it… no the dynamic balance is just totally scuffed and average rounds are complete and utter chaos because of the sheer number of threats being generated.