Ban Reason:
When told not to post an image, i posted an image that included said image.

Appeal Reason:
crossed has told me to appeal this ban

Additional Information:
I was given approval by the other headmin to post said image. I posted proof of this in general, which included said image and resulted in the mute 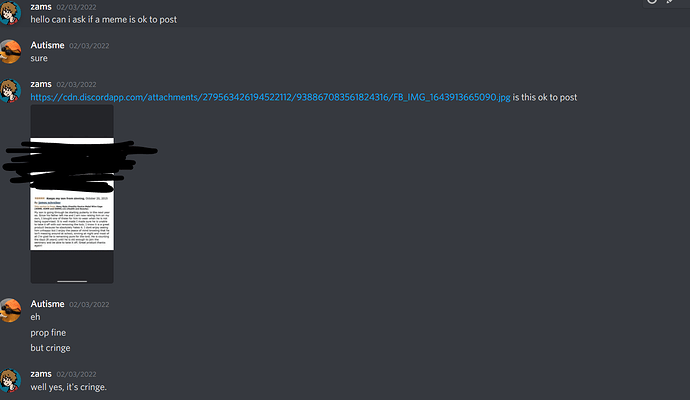 The internal dissonance over this had long since been sorted out
You just had to appeal.

The conensus we came to is → dont post shit like that, please.
However due to confusion caused by this dissonance i will reducing this from 3 points to one.

That would still leave you at three points & therebye muted.
So i will also be lifting a 1 point warning from back in the days, leaving you at 2 points.
aint that nice.

Dont post shit like that or make simlar lewd comments as in the past again.
If we end up here again, you’ll get a funny red x instead. In not kiddin around, stop with that shit. Its disgusting and uncomfortable.