CKEY:
derbyx
Admin’s CKEY:
rukofamicom
Is this for both servers or just one? If so, which one:
All
Which server did the ban happen on?
MRP
Ban Type:
Server & Shaft Miner
Ban Length:
Server (1 week), Shaft Miner (2 months and 8 days)
Ban Date (MM/DD/YYYY):
2021-07-20 06:52
Round ID:
31474
Ban Reason:
“Using Gluttony’s blessing to self-antag the station. Claimed they didn’t know what it did and that they were new to mining. Claimed they wanted to use it in Medbay. Knew exactly how to get to the syringe and used it in maints nowhere near medbay. Lying in tickets is bad yo.” & “Self-antag + lying in ticket. Would have been relatively understandable if you had been honest in the ticket.”
Appeal Reason:
I recently started getting back into SS13 with a friend. I did botany 90% of the time and decided to go Shaft Miner since my buddy wanted me to learn it. I did my normal thing went mining, killed ashen beasts. I stumbled upon a green facility with goo everywhere and examined it. It said something to do with indulging and being a pig so I thought, “Oh you just have to be fat”, so I did and I saw the syringe named “Gluttony’s Blessing”. Thought it would be something good with the title “Blessing” but didn’t want to use it without a chance of medical staff around so I decided to go to the station and use it near Medical. I then turned into the blob “Self-antaging” myself supposedly and got banned for it. I feel like my ban was unreasonable and could’ve easily gone to a slap on the wrist or at least a day or two ban on Shaft Miner.
Additional Information:
Another “Staff Reason” was “With your account being created at the peak of Ssethtide, I don’t buy the story. Sorry. Everything about this ticket screams “lying to keep myself out of trouble”. You weren’t going to get in much, but you chose the wrong way out of it.” Which in any case is unacceptable to base a ban on due to my account’s age or creation. I will admit I did create my account with his video as a spark but I’m not part of his fan base that troll and grief to ruin the fun of the server. You can see for my time on the server I haven’t done anything wrong or bad and have asked many SS13 questions to mentors since I recently got back into the game. Saying I’m lying and basing that off the fact of my account creation is unreasonable to ban off of. 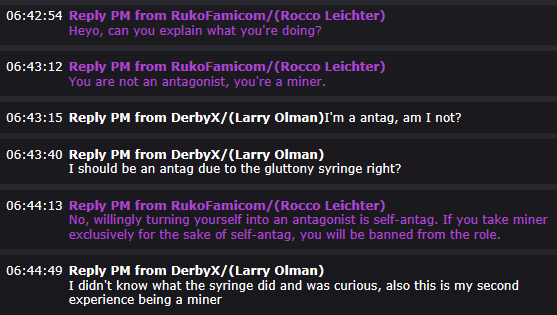 Not just off of your account age. Your story had some massive holes in it considering the logs.

I recently started getting back into SS13 with a friend.

By chance do you mean… DysfunctionalBug?

I’ve seen the message before with the blob and assumed I was it when I turned into a blob. Also I never beelined to the ruins. You can check the logs and know I’ve mined quite a bit and fought goliaths before then. You yourself said medical maintenance, is that not near medical?

I’d also like another admin to discuss this issue since both of us would be biased toward our decisions in this app. You wanting me to stay banned and me wanting to revert the ban.

You can check the logs and know I’ve mined quite a bit and fought goliaths before then. You yourself said medical maintenance, is that not near medical?

Science maints. No, you were nowhere near medical.

I’d also like another admin to discuss this issue since both of us would be biased toward our decisions in this app. You wanting me to stay banned and me wanting to revert the ban.

I don’t want you to stay banned, I wanted you to be honest. You already dug yourself a much worse grave than the ban you currently have. I cannot process this ban appeal as a denial without a second opinion anyway, but the banning admin is the one who has final say.

Now answer the second question above: Is the player you’ve been playing with DysfunctionalBug?

Take careful note of our rules on this before you answer:

You may not use information gained through voice communications with other players, while dead as a ghost, or any information stated in any OOC chat. This is considered cheating and violations may result in a lengthy or permanent ban from the server or OOC. Note: If you wish to use meta-comms to help assist/teach new players, contact an admin first and we will likely allow it.

Yes, that is my friend but he hasn’t given me any help while dead as a ghost, nor have I to him. He has only helped me via jobs. He told me how to mine, how to cook, how to clean as those roles and nothing else. My very first job on this station was a week or so a go was Janitor, then a Botanist, Medical, HOP, Cook, Cargo Tech then finally a Shaft Miner. If I was one of the Sseth people you described me as to be a lying griefer I would’ve done something worse in the past don’t you think? This is even my first ticket. I’m just here to learn and experience SS13. Even yesterday I RP’d like crazy at the bar with moth people and added to the experience. Now with this discussion I know what the syringe does and won’t use it again. I never play traitor since I dislike being one (I have it disabled). Anything I say in this isn’t reflected onto my friend’s account but to mine.

I’m not trying to say you’re a Sseth griefer, just that your account is too old to claim you’re just a new/inexperienced player. Bee literally wouldn’t exist in its state today without the Ssethtide. If I thought you were a griefer, the ban would have been permanent instead of a week, and the ban I placed is much more for lying than it is for anything else.

You were suspected of metacomms with DysfunctioinalBug already before making this appeal, you just more or less confirmed it.

I did botany 90% of the time and decided to go Shaft Miner since my buddy wanted me to learn it.

The two of you met up and assisted each other for a large portion of the round leading up to the ban. DysfunctionalBug was a cargo tech that immediately left Cargo to gear up for mining. You two interacted a lot and played/assisted each other a lot… all without saying a single thing to each other which is pretty strange behavior that almost always means a voice chat is going on between friends.

I bonked you about the morph behavior as seen in the ticket above, and you gave me a really conflicting story instead of opening up about your friend telling you what the syringe did and how to get it.

Now for the rest of the story:

Shortly after the ban was issued and you were killed via smite, DysfunctionalBug came into dead chat.

They sure seem to know what the syringe is and carry the common misconception gained from other servers that you’re allowed to antag with it. The very same explanation I was expecting from you as soon as you said:

Now with this discussion I know what the syringe does

So even though they themselves were hand-feeding you (and almost killed you with improperly cooked Goliath meat the first time)… they didn’t tell you anything about the syringe at all which might lead you to claiming you thought you were an antagonist automatically? Because they definitely did know what the syringe did.

All he told me was to use it in the station and go somewhere not in public. He never told me what it did until after I turned into it and he saw the announcement that he told me I am an antag. Me not asking him about what it does is my fault. If it were possible to check my playtime with BYOND, I didn’t touch SS13 when I got an account, only until now did I touch the game and started learning. I even had to reactivate my account due to inactivity (I have proof of that). The only reason I push on the notion of the Sseth thing is because you brought it up and it seems you’ve based your actions around it. That is all. I’ll wait until someone else decides the verdict.

I’ll wait until someone else decides the verdict.

Someone else doesn’t need to because your story lines up pretty well now. I only need a second admin if I’m going to deny the appeal, not accept it.

Your friend had some bad information and passed it on to you, and you got caught with your own lies. Admins are (usually) not unreasonable when people make mistakes, but trying to cover it up by lying makes the issue 10x worse.

Regarding playing with your friend: Remember to keep your discussions in the game chat instead of purely in a voice call or external chat. While you can use VC with the game for teaching, your characters still need to be in regular communication in the game. It should go without saying that sharing information about deaths or seeking help from a friend when things don’t go your way will result in an immediate permanent ban on almost any server, because that is when it goes from just teaching to cheating.

The ban will be lifted shortly. Apologies if this was particularly stressful for you - I’m not the best at being gentle. Do remember that your friend, as helpful as they may be, is not an Admin and doesn’t decide what is or isn’t against the server rules too.

Besure to ahelp anytime your uncertain. Its free and are willing to prevent a problem instead of punishing one.

This topic was automatically closed after 17 hours. New replies are no longer allowed.