“A Crate full of Decommisioned, Outdated Tasers. Probably useless, but a decent price.”

This suggestion is a mix of two suggestions, a new “Outdated Taser” item and a crate containing them.

The Crate would be found in a hacked (Not Emagged) Cargo Console under Security for $1200, containing 3 “Outdated Tasers” that come in a locked security crate.

Now, the Taser Itself:
The “Outdated Taser” is a new weapon that acts similarly to a real world taser. It must be loaded with a power cell before using, and can only be shot once. When it’s shot, the user would either need to click on the prongs if they landed on the floor to reset it, or take it off like Embedded Objects if they hit a target. It would automatically tase the person on impact, and can be shocked again via clicking on a taser while holding it.

Here’s how it sucks:
First, the single shot thing is a big weakness, however, like actual tasers, they have a failure rate. Maybe around 31%. They also can be stopped by wearing any kind of thick or bulky clothes, such as Leather Jackets and Coats, Firesuits, Hardsuits, and Body Armor. Also of course anybody on Stun-Reducing Narcotics would likely just not be effected. Lastly, people with robotic organs or parts would take burn damage from the taser itself, including any subsequent shocks.

Here’s how it doesn’t:
The projectiles are very fast when fired, making it more difficult to dodge. Being able to shock a target again if the prongs are imbedded could make it easier to keep someone down. It’s price isn’t that bad either, costing $400 per Taser, so it wouldn’t leave Cargo broke. Also, the obvious benefit: almost Instant Ranged Stun.

Misc Information:
If a target has the prongs imbedded, but is able to run away, the prongs will be torn out after a certain point, dealing some minor brute damage. Security would be immune to tasers as they are wearing Body Armor, however IPCs would take a fair bit of burn damage (Perhaps half that of a Laser shot spread across the entire body). If the power cell used is depleted, a message will display, likely something like “The taser isn’t charged!”, and can be removed by selecting the taser in hand if it’s ready to fire. The Taser would have a cooldown time between shocks if a target is hit to avoid spamming, and potentially give a criminal a small window to escape.

Why would you buy this?
It could be used to give security a Sidegrade to the Taser, to give standard crewmembers a Self-Defense weapon that wouldn’t let them take down security, and could give aspiring traitors something to stun at longer ranges, although it would be quite obvious if it’s out in the open. 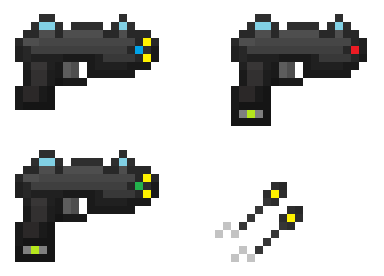 Reference Image 2:
(Thank you to “TetraZeta” or “retard fortnite moth” for making this!) 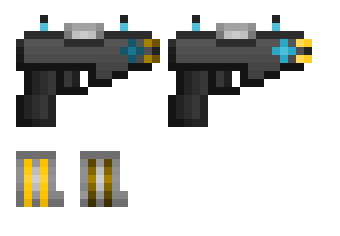 Edit: After getting concerns over it being a Hardstun weapon, I gotta clarify: I got no clue how the mechanics on this would work. Maybe it would only work as a hardstun, maybe it wouldn’t. My personal idea is something like Knockdown and Convulsions, however, I am not a coder. I also added a bit on to the misc section.

Edit 2: After looking up status effects, I’ve found a mix that might work. Knockdown + Jitteriness + Dizziness. Knockdown for the Stun part, Jittiness for the look, and Dizziness to make it a bit harder for someone to run off after being hit. Also would probably slow you down a bit.

Edit 3: if you see a bunch of edits, I’m actively working on the Taser Design, so I want to update the picture

Hard stuns have been removed for a reason. No

the reason being that newfriends are too unrobust to adapt to them :’))

I’m a very experienced and robust player, and advocate for their removal. They’re no-skill

I’d think of it as a Tradeoff. Would you like to get a guaranteed stun, but you need multiple hits, or do you want an instant stun, but it’s generally unreliable? Also I never went into how the Taser’s stun mechanic would work exactly, so that is up for debate. Maybe knockdown and convulsions?

I dunno if we gotta nerf it THAT hard

Dumb idea. We tryna phase hardstuns OUT, not add more in

Not even Dr. Frankenstein would have dared tried to raise this thread from the dead after this long.

Nineteen days of decomposition isn’t that much, also frankenstein is the monster, the “Dr Frankenstein” is actually just called doctor in the manga.

instead of making it a hard stun, make it deal stam damage for as long as the prongs are in with a 4 square detatchment radius, possibly making it take about 3-4 seconds on a fully healthy player uninterupted to bring them down.

I like the idea of stamina damage, though I think 4 tiles are a little bit short, though stamina damage does slow you down, so maybe. Ima see if we can get any of these ideas like tested. I’m not really a coder but I can probably just rip some things out of the taser and do work from there.

the reasoning behind being 4 tiles is that it makes it better suited for usage in a small room/maint tunnel ect.

in the main hallways against someone running you’d have a better time with a disabler, the taser would be for someone actively trying to fuck you up rather than someone trying to run away, keeping both weapons niches.

They work by having a restricted range and a janky ass loading mechanism. You need to be pretty much within just over 4 tiles of your target hitscan.

NSV also has more gun and range based combat, as far as i am aware.