Incident Description:
I was the roundstart Mediborg and my AI became Malf midround. We had to hijack so we ended up setting up the borg factory and set to work making as many borgs as we could. Eventually I grabbed this guy who was Drops-Much-Ash at the time, subdued them, and pulled them into the factory. They announced over comms that borgs were bad and were force-borging people, breaking their law 0.

They also said “again” because the same thing coincidentally had happened the previous round, breaking rule 14.

Additional Information:
Being a Cyborg deadmined me and I was the only staff in-game and I obviously can’t handle a ticket involving myself. 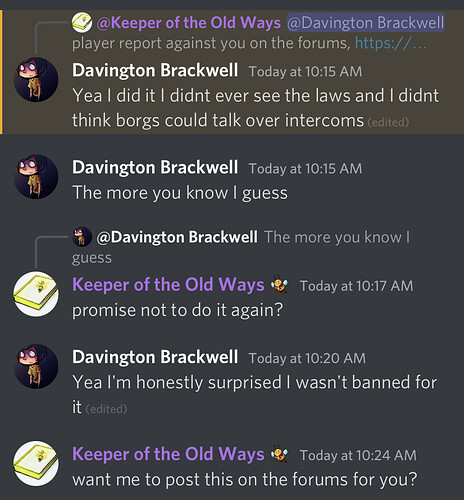 Yea I won’t do it again

I reviewed this player’s overall behaviour during the round.
They’re a new-ish player, however this was not their first time getting borged by a malfunctioning AI.

As a “converted antagonist” you cannot sabotage your own team.
You’re supposed to remain in character, and follow your new objectives.
You’re also not supposed to remember specific events that happened in other rounds.

I will issue a note, but keep this in mind in the future.