Just like the Daily Mentor Facts thread, but in reverse – ask people all the questions you ever wanted to know about how SS13 works on Beestation.

I’ll get the ball rolling:

How do you actually plasma flood as AI? I’ve seen Malf AI do it a hundred times, but I wouldn’t know how to do it if I was malf AI.

I would have made a drawing over atmos but im on mobile rn so have this instead: Max the output gas pump for the plasma chamber, stop the n2 output going into the air mixer and set the node that has o2 coming into it to 100%, lead the plasma towards the mixing chamber by maxing the pumps on the way to the injector in that chamber, follow the mixing chamber output pipe and it should lead to a gas pump connected to distro, max it and you’re done.
EDIT: To actually flood rooms after that you need to increase vent output using an air alarm, you can just use a preset setting for that, also some maps like box have a gas pump in sec maint set to 101 kPa which will slow down the plasma going into sec’s distro.

How do you actually plasma flood as AI?

Someone answered your question directly, so I’m going to propose an alternative:

As rooms fill with invisible, highly toxic CO2, you get to witness players without protection flop almost immediately unconscious when they walk unwittingly into rooms that have been scrubbed.

Distro looks innocent at a glance, but anyone taking a detailed look will catch wind of what has happened and your days will be numbered. It’s not as destructive but it’s way more fun for the crew to deal with and clean up, and not as visually cancerous as N2O.

In atmospherics you turn on the plasma pump and filter leading it into the air mix and from there to distro. Just track the pipes leading from the plasma chamber and open and max pumps along the way.

That is the basic plasma flood. To improve on it you can:

Consider practicing on a private server.

A good plasma flood will kill 97% of the crew and burn important assets. You will still need to deal with the 1-4 people coming for you who usually know what they’re doing. Hopefully you burned most of the things they could have used against you.

How do you actually plasma flood as AI?

I have to note though that as a AI there are fewer reasons to plasma flood and kill everoyne. Some cases you can but dont do it because some one sneezed at you the wrong way

Is it possible to just turn the station into a trit burn chamber then?

Yes, but it’s rather complicated and unreliable (not least of which because of the way firelocks and vent/scrubber placement works). You will need to edit the N2 canister so that it takes plasma instead, vent out all the N2, set the plasma chamber to move through the waste loop, and then edit the airmix to be at a 9:1 ratio of oxygen to plasma (higher oxy content will be better).

ideally, before this, you would want to fully siphon out all the nitrogen around the station. you can leave the oxygen, it’ll help the trit burn.

Daily not so daily question
What things fall under this category

What things fall under this category

Antagonists from mulligan system, let it be traitors(also called sleeper agents), lings or whatever else.

Basically if round’s antags get killed early the game chooses a bunch of living crew/latejoins to become the new baddies.

I would suggest turning it off unless you enjoy becoming a traitor 50 minutes into the round. 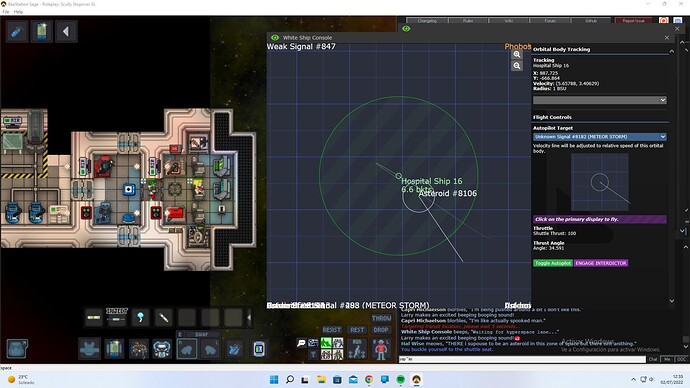 Me the asistand and the invisibole stalker1920×1080 182 KB
I was alone in the white ship with an asistant but a pinpointer marque a 3 person in the ship call unknown BUT THERE WAS NOBODY IN THE POSITION AND THE POSITION OF UKNOWN WAS SLOWLY MOVING? Any ideas of what could have happen?
itsmeowdev July 8, 2022, 9:46am #13

if you were cruising, all ships in cruise share a z-level and thus sensors. you probably saw that.