Well I’ve been playing here for a couple of months and just wanted to know how well other people perceived my character. So here I am. I mainly play on lowpop (15-45 players) due to my time zone so I tend to miss all the chaotic fun that happens during highpop.

After getting over my lizard Shaft Miner only phase I’ve decided to explore other departments. So I made a moth character, hit the random name generator until I saw one I liked and got Cydia Albipuncta. But later I decided to change the last name to something that isn’t in the random name generator. Well, I’ve played a couple of rounds as other departments and liked Medical the most. So you’ll usually see me in medbay as a Paramedic, sometimes in Science as a Scientist and rarely in Engineering as a Station Engineer. I tend to be friendly towards people, maybe being a bit too pushy with the medicine and wound treatment and I generally try my best to save as many lives as I can. I do try to interact with other people but I’m still learning the nitty-gritty of RP and stuff.

Any sort of feedback would be appreciated, even the usual “literally who?” replies.
Oh and here’s a picture for reference. 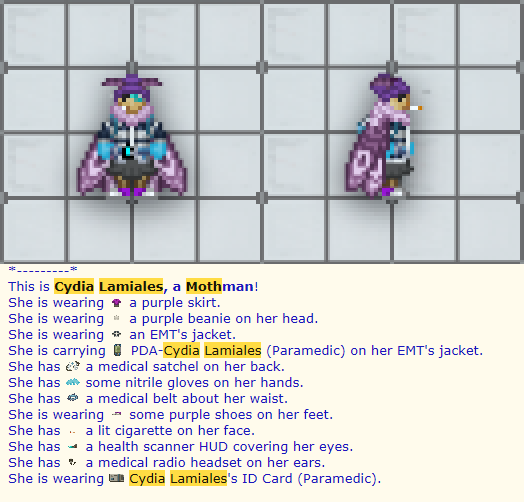 In my experience, People won’t know just who you are until you’ve been around in game for about a year rather than afew months.

Heck I’ve made myself plainly present on the forums with art and mad scrawlings as the voxel art guy and It didn’t stick.

To that effect, Who dis?

there are to many cydias to track of around

Constantly has to save my dumb ass: 10/10 paramed, gonna hire cydia as personal medical next time im a CEO and i see you haha

The person is ok

Well, I’ve played some more. Quite a lot more actually. Still am bound to the lowpop hours though.
Anyhow, I’ve established more characters.
Ceti AD the MD, sometimes engineer.
And H3LP3R the engieborg.
Mainly cuz I’ve been having this itch to build stuff as of late. Teslas, CO2 SMs, custom buildings in space, you name it.

is this a lizard

Lizards are not real

Great player, fun characters and really fun to assign building tasks to… go build me a bar sattelite next time!

Definitely know your stuff and you’re more than willing to step up to teach others who ask!

Fun to play with, good RP, quite nice and helpful as a mentor, overall a good member of the community i’d say. One of the people i can rely on to actually give decent RP instead of play silently and just focus on their own thing

Not to mention, they are fun to have as an antag, due to the fact i had mentioned before, they RP well

Medbay Cydia sombody you can trust in. 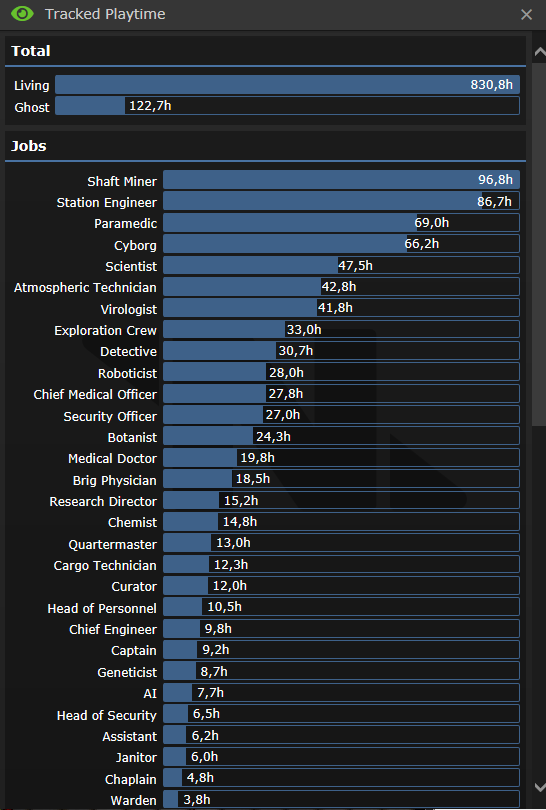 After getting over my lizard Shaft Miner only phase I’ve decided to explore other departments.

the most played roles you have dont interact with the crew
My point still stands
Ghost main.

You think I read that novel?