Your CKEY:
CoIoneISanders
Your Discord:
Colonel Sanders#3126
How long have you been playing ss13?:
A year.
Who vouches for your experience (if anyone)?:
Absolutely noone
Game Experience (More Detailed): 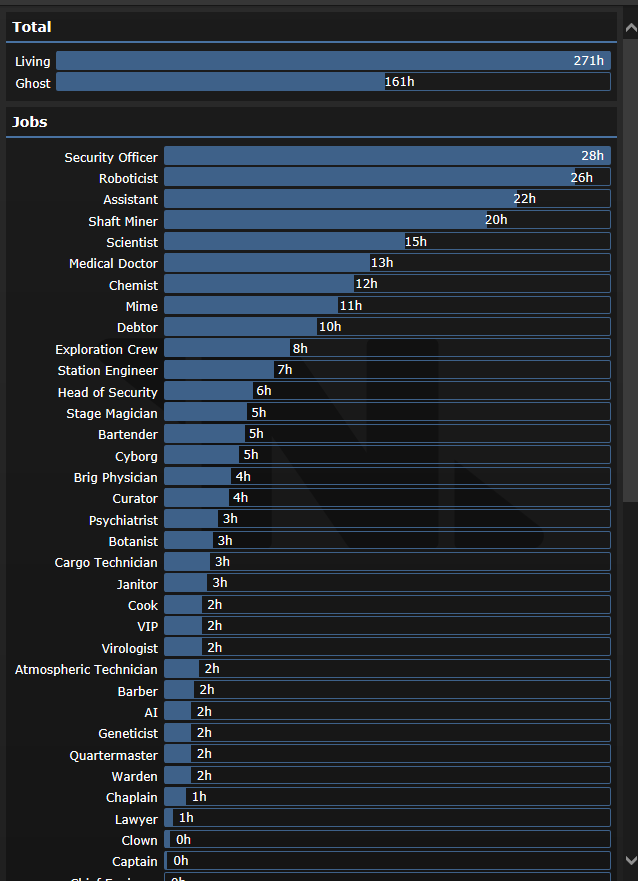 image638×881 21.1 KB
Hours on a typically lower side but I know a lot of shit I would like to say. Know things about roles but dont know everything about engineering. Also know how to ban people so thats a good skill for a mentor, yeah?
Ivniinvi November 15, 2021, 7:10am #3

You retracted your self plus one, now it’s question time:

How do you respond to the following mhelps:

Can I ask some questions for fun? These aren’t your typical mentor questions so just take it as a bonus

I can make instakill weapons with the thunderdome via adminbus, Botany can make some evil fucking plants, Explosive lance is a weapon for unrobust people who spam ided.

Not what I had in mind, but technically true. You can stack any amount of telecrystals in a syndicate toolbox using bluespace bodybags. Your answer is still accepted.

Force say nanites, brain trauma maybe, or they are just being an asshole.

Nice. The third way would be a disease by the way.

Spawn in crab related shit for him, using my admin powers and subtle message him crab. Duh.

Assuming you mean what I think you do, well done.

Arnolds on its own wouldn’t be regular spaghetti, but syringe is a valid answer! The second method would be renaming either the ingredients or the final dish and its description with a pen.

If you wanna talk like a robot, become a robotic species, become a borg, get your tongue replaced with a robotic voice thingy

The answer I was specifically looking for was :b for binary channel, though your answer is a reasonable assumption.

You can do .v For service comms, or you can PDA them - use the confession booth frequency

I honestly can not tell. Theres “Disk Research” on the RD consoles that permanently remains at 200 while some stuff randomly unlocks or gets locked, Research and Nanite research work the same, im assuming its a system where tech disks boost the disk research allowing shit to be unlocked at snails pace depending on the explorers. Thats my best guess.

This was referring to the Discovery Research system. This answer honestly looks like you don’t understand the post supercruise RnD system.

This is one of the new randomly generated maint disease names.

You need to infect a certain number of people before unlocking some symptoms, Self Resp can be unlocked for 8 points but requires 16 people to be infected.

Best I know you can do is use instant summons spell on a cream pie. Other than that I dont think theres a spell specially built for creampies, or I havent seen it.

There’s a spell to summon them built into the Tae Clown Do shoes.