CKEY:
LastCrusader105
Admin’s CKEY:
Cuntcelius
Is this for both servers or just one? If so, which one:
Golden
Which server did the ban happen on?
Golden
Ban Type:
Server
Ban Length:
Week
Ban Date (MM/DD/YYYY):
13/04/2020
Round ID:
Irrelevant as he seems to reach back in time to make it fit what he wants
Ban Reason:
Metagrudging
Appeal Reason:
Cause he is a window licker
Additional Information:
Previous round I was BB with someone
We completed our objectives quick
I said shall we leave as I don’t enjoy murderboninh
He said he wanted to have some fun
So I’m chilling, low pop
Everyone is dead accept my employee the Atmos and more antags
When on comes a name I know, bass I meet him at arrivals and ask if he wants to see a funny, he agrees so I drag him over to a force field disposal chute thing (dunno how to describe it)
And throw him in, after he dies I then pray and say that was funny wasn’t it
He denies it was and says he doesn’t find murderboning fun
At this point my BB has called the shuttle so rounds ending
I concur and say I only killed him
He then sends a ERT team cause he salty I guess
Ruins the round but I let it slid, 40 minutes of everyone watching us murderbone

Skip to next round, I’m not antag so decide to go afk in Sm
Greet the CE (bass)
Ain’t 100% recollection but logs will prove one way or other
He says lemme guess wanna kill me?
I said no I don’t meta grudge
Gimme the boots please
No get normal ones, that’s effort so can’t be bothered
I say CE is ling
Marshall someone ( a scientist) says no he ain’t I see him, this is round start how could he see him
So I assume he is traitor or BB either way he is antag
So my buddy gets involved in a explosion and misses a arm, I go to help him
20 mins later SM still ain’t set up and CE nowhere to be seen
So this is suspicious
I die due to Sm issues
I say ping me when around ends
Here comes caelius cause he got a stiffy over possibly banning crusader
Why you call out CE
Hello
So this point I return to my pc to get my coffee cup to make a coffee I see his pings

Going into next round he decided I’ve meta grudges against him, I then say he got arm blade (not against rules) and when he acts suspicious I continue to call him out

Caelusus does as he always does with every ban he gives me, doesn’t look at the facts only what his underage boyfiend tells him

In b4 closed cause mean to Caelusus

Better ping them both @Caecilius @Bastian0930 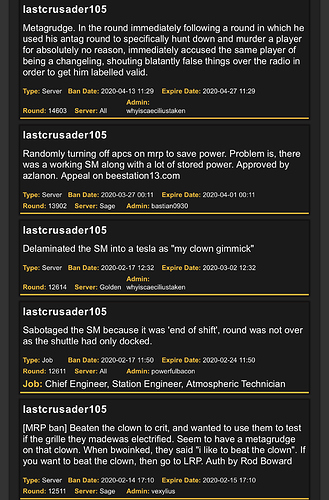 From what I heard you we’re constantly calling them out and harrassing them IC trying to get them lynched. This is definatley feels a little metagrudgey if true, considering the round before you were obviously angry at Bass for sending in an ERT after you killed people that were non targets.

From what you HEARD
Doesn’t make it fact

Originally I called them out as a joke for him saying I’m meta grudging him, then after Marshall instantly came to his defence I got suspicious
So I’m not seeing your point?

I can word it better. From what I’ve seen you definitely have a grudge against Bass and take every chance you can to act on it outside of the game. You don’t like murdering people so you’re just chilling, but you decide it’s definitely worth going out of our way to murder one specific person you know and dislike. That’s literally metagrudge.

Nobody else deals with you because nobody else wants to deal with the way you target people you perceive as having wronged you (Harassment out of game, potential metagrudging in games). Bass and Cae are better admins in that regard because they’re willing to deal with the repurcussions for having to put you in line. If your best excuse for going out of your way to harass someone is “it isn’t against the rules”

Do not excessively bully/harass other players in or out of game.

You prayed after doing what you did, there’s literally no ground to stand on in claiming you didn’t really know it was Bass

I didn’t say I didn’t know it was him
Let me go into more detail
I don’t like to kill cause it could be a new player
But I know bass IC so know he isn’t new so killed him
If I saw Slav or Alfred I’d have done same thing
And prayed cause it was gamer set up and said, did you enjoy that?

Did you even look at logs before you cast judgement?

This is metagrudge, straight up. Whether you knew it was Bass or not. You acted on recognizing a player that just joined a round. You acted on someone because you recognized them after taking a stance of not murdering for the round.

Because I know fine well that you will ignore everything I say, I will simply go with what the majority consensus in this thread is.

They agree it’s metagrudge? It sticks. If not it gets removed. Fair?

I say unbean the boy, even if it is metagrudging, its just on golden, and its harmless admin teasing. It’s fun to dick around with the admins, it gives the server a much more personal feeling, and when its done on golden it shouldn’t be given a three week sentence.

Can’t kill admins as antag anymore
And that’s the sad thing chad, I thought me and bass was having banter till his bf came along

Nobody else deals with you because nobody else wants to deal with the way you target people you perceive as having wronged you (Harassment out of game, potential metagrudging in games).

I deny that, Oneplusone R.I.P xylana rod vexy and powerfulbacon have all banned me and haven’t faced any harassment
Every bam both bass and caelius has given me I’ve denied
I feel both can’t be bothered to get all evidence so just make judgement calls
Let not the shitmin live, and I take that seriously they be shitmin and I call them out

I said no I don’t meta grudge

So ock in ick

I hunted down a new player I recognised

And throw him in, after he dies

I hunted down a new player I recognised

This makes very little sense, and implies metagaming by acting on a name for the name’s sake alone

It’s fun to dick around with the admins

regardless of weather or not it’s fun why the hell would you annoy someone who could ban you? Because “being annoying” isn’t bannable? You realize that if you’re a big enough nuisance they can just ban you for being a problem, right? It’s their server, so they’re totally within their rights, so why would you provoke that? It just seems very ill thought out to me.

Whether or not this ban is because of a meta grudge or not I can’t say, but it’s clearly metagaming, so my 2 cents are that it should be upheld

Part of the reason for bans like these are so you can cool your jets and think about what you’ve done, it’s only a week, enjoy another version of spessmans simulator or another game entirely for the time

Point 1, he said metagaming
So he is icc occ
Point 2
Meta gaming is impossible to prevent and ignore, so let’s not pretend it doesn’t exist
Point 3
One murder isn’t murderbone, what are you a MRPer?
Point 4
same as point 2
Point 5
Was multiple rounds, so I’d is irrelevant
Point 6
Not my words

Meta friends isn’t against the rules which falls into the same catergory as meta gaming, so isn’t ban worthy

As for to cool off, my bans for killing someone as a antag
Then calling him out for suspect shit next round
Unjust ban in my opinion so I appeal
You’d do same No doubt

its harmless admin teasing. It’s fun to dick around with the admins, it gives the server a much more personal feeling,

Constant, unending harassment at every turn is not harmless teasing. Metagrudging an admin that’s trying to play the game as a normal player isn’t either. This was handled by a second admin as an incident between two players.

If you think harassing admins is good fun and something the server should allow and be known for I don’t even know how to make a point to you. We struggle to keep good, level-headed admins on board because most sane people don’t just accept the abuse.

Trying to justify what happened because the victim was an admin is absurd.

I’m still not seeing the validation for meta grudging?

All players are dead by my BB, new player joins I go to make sure he isn’t a issue

Next round he brings up meta grudge so I say lol he antag, a random players says he isn’t cause he can see him, which he couldn’t
So I took him for being his BB so he I continue to say he is antag
I rarely see the CE the whole round, and see a sec borg attacking his BB (the borg was self antagging it turns out) but I take it for further evidence of BB

So where’s the meta grudge?