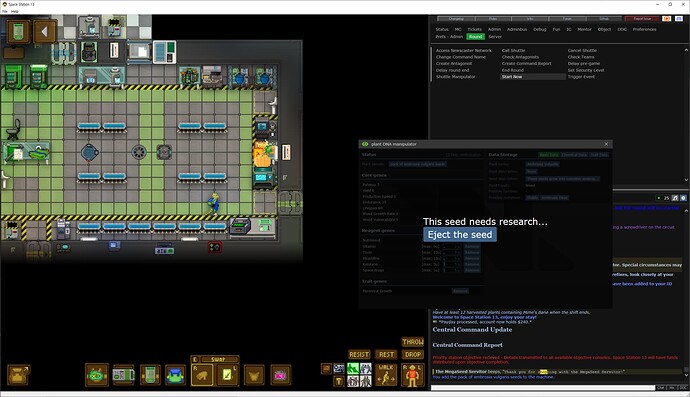 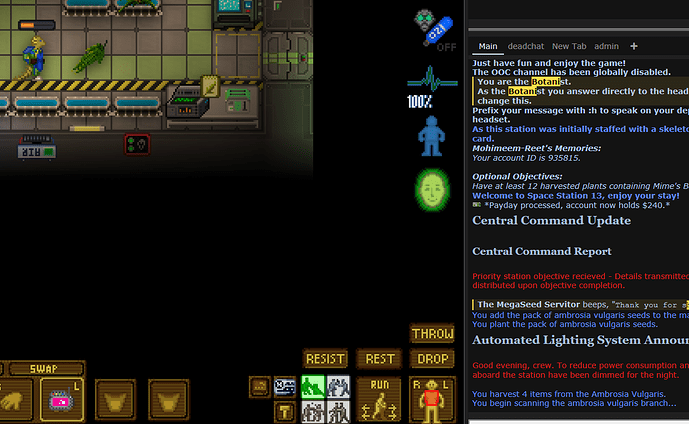 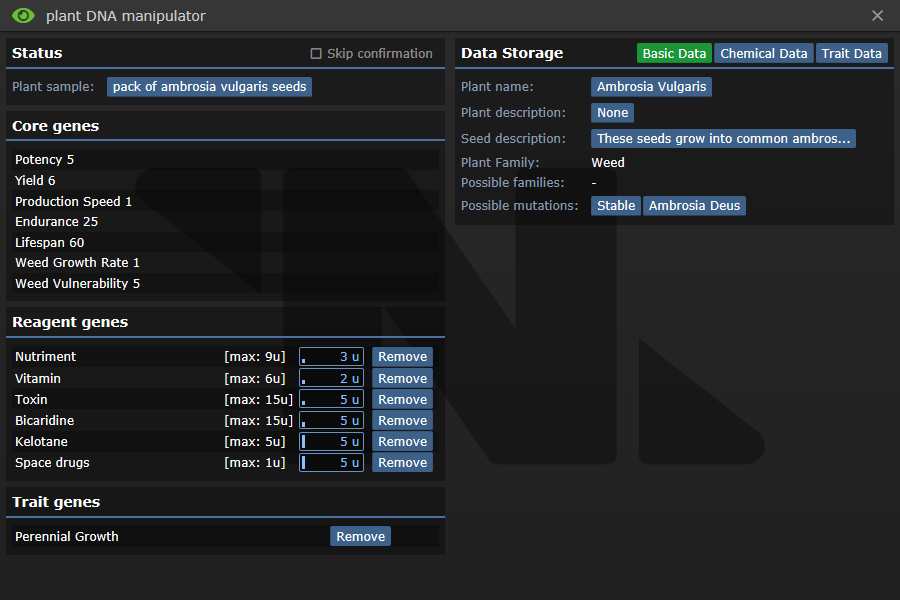 unknown-12900×600 29.9 KB
4. Now you can edit basic information, because the plant data is now stored in the plant research system.
Left top: basic stats no longer changable. The stats are fixated now for some reason.
Left bottom: You can adjust the chemical size at your wish upto the maximum. 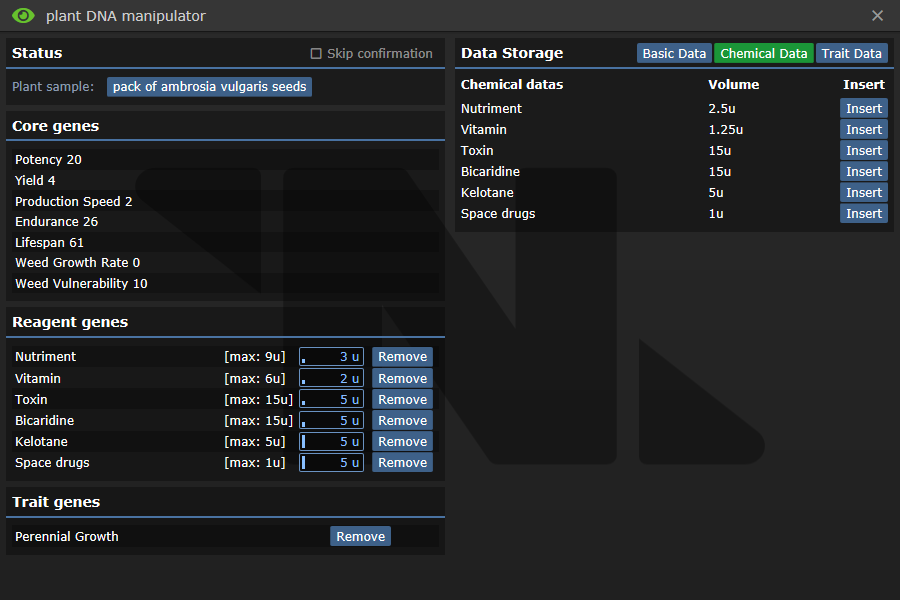 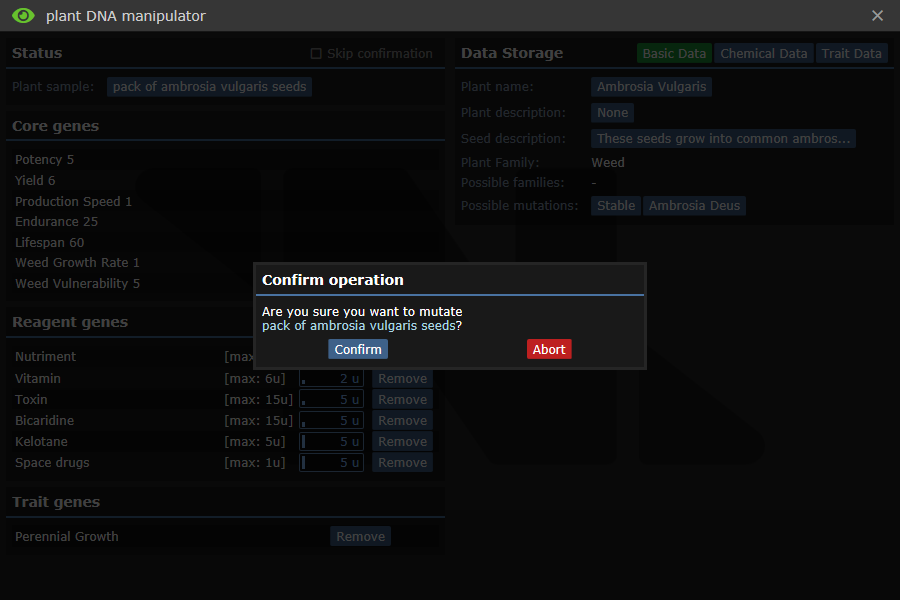 I’m interested to see where this is going. If it helps with preventing deathnettle powergaming, Im all for it. What’s important is that this has to result in an interesting workloop for botany, an enviroment that discourages le killer tomato and encourages growing interesting plants or actually doing the fuckin bounties.

You inserted a seed into the gene manipulator. You can’t modify it right now before you research it.

You are scanning a harvested crop for research. - roundstart crops are not scannable.

I swear to god, if this requires help from Science this will fall flat on its face. Science already couldn’t give less of a shit on botany.

I do like the discovery point part. Maybe that will increase inter-departmental cooperation.

Now you can edit basic information, because the plant data is now stored in the plant research system.
Left top: basic stats no longer changable. The stats are fixated now for some reason.
Left bottom: You can adjust the chemical size at your wish upto the maximum.

Nice. Your wording “for some reason” is a bit… strange. Was this intended or no?

Chemical data is stored in the gene manipulator like geneticist’s console. (Trait is the same)

You can mutate a researched plant directly into its related mutation. No more stupid mutagen rng.

True. I end up with way too many insta-obesity potatoes. Maybe make it easier for plants with less beneficial stats? For example grass.

I swear to god, if this requires help from Science this will fall flat on its face. Science already couldn’t give less of a shit on botany.

Ah, about this, botanist will roundstart with a discovery scanner, so no worries.

Unstable mutagen has been fucking annoying to do bounties. I think this will make it better.

Also, deathnettle will get a major nerf and a minor buff to make it away from powergaming. I will reveal the detail later.

Excelled QoL changes but the stat thing worries me. I’m not partial to an endless deluge of giant plants myself but speed not being changable is the kicker, as (and I’ve said this before in your last post for this) any job that just waits for ages instead of doing anything is shit.

Overall…it looks really cool! Here’s my advice for this iteration:

This does leave the important question of how you’d even change the stats. Maybe use the biogenerator’s biomass? Make it able to print unique chems that change stats instead of the old chem dispenser stuff we had? Would give a use to biogen for actual botany business for once.

Anyway that’s what I got. Looking forward to the next post.

However it’s worth noting that botany would be that much cooler if it could output good weapons eventually. Mutating and maxing one plant for really good weapons is cringe…Working hard for it, presumably once a threat arises, is not. Consider moving acids to harder to get plants or even making an acid recipe that requires several mutations/harvests to assemble from its component chems.

Not only that, but one free of needing botany chems(fuck botany chems, they’re terrible at doing what they need to do).

Ignites, as someone who plays chef a lot will these changes impact botanists’ desire to grow normal, non-power game food plants?

Not the best food, nor the most hunger filling, nor the biggest sprite food. Just an ingredient plant for crafting tab. That’s all chefs really want.

Will they be annoyed by the tray usage, will chef requests still be bothersome, etc.?

Probably been mentioned already but mutated plants at least have always been scannable for research points, with I think Omega weed being like 777 points

Being completely unable to change them is absolute fucking lunacy and you literally just made three chemicals and an entire item worthless as a result.

unless I find a better design to change stats not through chems, I don’t want to keep the chem changing stats like that. You can literally make 100 potency always with no limit, and I don’t like TG botany’s way to increase potency and stats. This is the real lunacy.

I mean, I have no idea of a good design for stat changes, and the current design is way worse.

The gun that is otherwise entirely useless because its been bugged for years and hasnt worked the way its intended to.

Left bottom: You can adjust the chemical size at your wish upto the maximum.

So you can manually change the chem amount of a plant instead of setting it’s percentage? Wouldn’t hat pretty much negates the need for Potency?

Potency no longer involves the output because you will always get 100 potency for every plant. You will get a flat chem output based on the chem adjustment. In the case of Ambrosia Vulgaris in the image, you can get:

and they can be maximized to the max value written next to their value.
so, yes, the plant will be less needed to have 100 potency before unless you’re going to use the plant’s traits or something else.

Sorry, didn’t mean this to come out as a criticism. More like, "well, with these changes, maybe removing Potency would not be needed? Which would mean no more botany chem machine cos the “drown the plants in good chems” thing isn’t that great.

My suggestion would be to fix the Botany gun. Maybe do the viro extrapolator thing on it, so it increases it’s power/reliability by upgrading it inste4ad of being locked behind research Science don’t care about.

I am sorry, but still no. and I am 100% sure botany will be still powerful with this change. even if stats are not changeable, they still can get bunch of bullshits.

but don’t worry about the idea right being merged. It will be testmerged and we’ll find it out about stat change, but my current idea is to remove the stat change.