How long have you been playing ss13?: For over a year here i think i don’t really remember when i joined 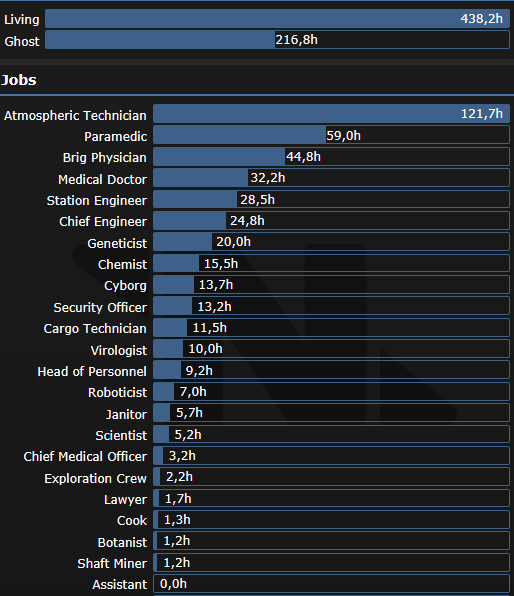 Who vouches for your experience (if anyone)?: Other mentors i suppose

Game Experience (More Detailed): I used to be a mentor but then i got beaned on the discord for posting inappropriate memes. I know a lot about engineering and most other jobs apart from mining or botany maybe. From what i remeber i was able to anwser around 60-75% of the mhelps i’ve seen while still holding the rank. this application is not really high priority and i understand if i can’t get the rank back after being demoted so don’t hurry with it

beaned on the discord for posting inappropriate memes.

A ban which occured not even a month ago yet.

Mentors are expected not to accumulate neither bans nor warns beyond a reasonable amount.

Mentors can still be banned, and are given some leeway even that occurs. We are human after all, so some mistakes are allowed.

However, with that comes an expectation that we show the ability to learn from our mistakes, and I simply don’t think a few weeks is enough to prove so.

That is proved through actions, not words.

This is really not the mindset you should have in the given situation.

I will happily give you a positive score when you show your warned behavior is no longer a habit.

I will give a -1 too. i think it is still to early for oyu to reapply for mentorship considering you just got unmuted and when you were removed from mentorship.

Also by actions do you mean just waiting? I was banned for posting memes that were inappropriate when i thought they were fine. I’ve promised in the appeal to not post any more memes at all so by proving it by actions do you just mean seeing how long i go without posting any? You really make it sound like I’ve commited some despicable crime

do you just mean seeing how long i go without posting any?

It probably came off a bit dramatic because I wanted to provide a throrough and verbose response.

I have been told it was a mute and not a ‘ban’ per se.

As I’ve said in the appeal i will not touch 6 hour messages ever again (all the points came from there). I understand now that such memes are not welcome here and i won’t post any more of them anywhere on the discord

Given the clean ?centcom record im inclined to believe you will keep your word.

I do agree its a bit early to reapply, but i do feel dementoring for shitposting is a bit excessive.

I appreciate the gesture but yeah i don’t think this one’s recoverable. Also yup it was a mute indeed. I used the word banned becouse it’s pretty much the same thing

I mean, I’m +1ing too. You didn’t get muted for your mentor conduct, just your general discord conduct.
t:-1

It’s up to headmins to decide if you can be accepted at all, but I’ll ask some questions in the meantime

Non mentor anwser: Don’t. if the radiation escapes atmos it means that the fusion is approaching 01x31e°C which is pretty much the only reason for doing fusion and why would you ever want to hide your glorious achievement

Mentor anwser: Reinforced glass is one of the best materials in terms of blocking radiation so you can construct a radiation shield around the chamber by placing up to 3 directional reinforced windows per tile. But if your fusion got hot enough for the radiation to escape atmospherics then pretty much nothing will contain the radiaton meaning that you’ll have to instead slow the fusion down by limiting the tritium supply 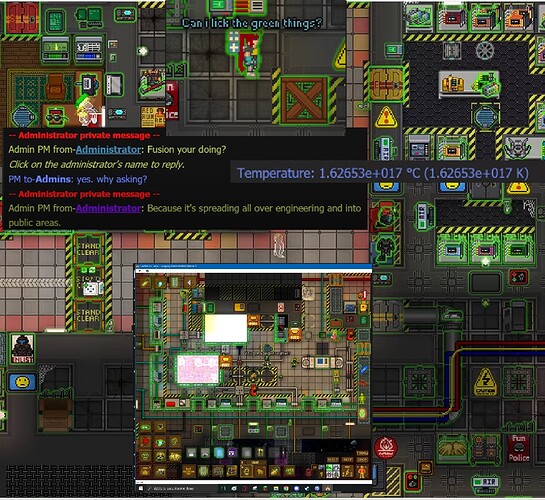 300 is the point where a body husks so i assumed that it was the point where it unhusks too (unhuskable but not revivable) but honestly i wouldn’t know since if I’m already fixing someone with 500 burn then I’m gonna heal them up fully instead of stopping half way to apply synth. And the uranium glass is actually amazing. I need to get into making fusion again

We’ve decided that it’s too early to reconsider you as a mentor given your recent discord mute and subsequent demotion. You’re welcome to apply again after a more substantial period of time has passed, assuming you avoid further incidents.