CKEY:
barber477
Admin’s CKEY:
rukofamicom
Ban Type:
Game Ban
Ban Length:
Forever
Ban Date (YYYY/MM/DD/):
2021-08-30
Round ID:
32366
Ban Reason:
User affirms they did not know this was a roleplaying server and also affirms they have no interest in roleplaying here at all.
Appeal Reason:
I do want to roleplay, but I didn’t want to participate in what I believed was a hackers game. I just arrive to find myself teleported into a single tile room.
Additional Information:
I get that I need to roll with the punches, I do usually, but a permaban from all servers for a first time offence, over not roleplaying on a server that I thought was MRP at most seems a little harsh. Plus, I thought committing suicide over not wanting to play some villain’s games sounds pretty roleplay-y to me. 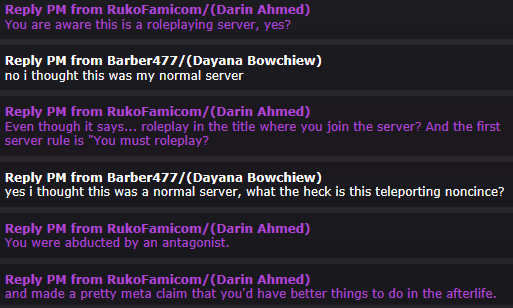 MRP or not, OOC in IC is not tolerated on any level of roleplaying server, but that isn’t why this was a permanent ban.

If you are going to immediately complain in an OOC fashion when encountering an antagonist and then kill yourself, it’s pretty indicative of not really wanting to be a part of our server style.

It was a permanent ban not because of that specific offense though, but because you both didn’t even know you were on a roleplaying server and stated you didn’t have any interest in roleplaying on this server.

how is that worth a perma ban? also, side note, seems unfair and baised to get reviewed by the same person who banned me.

look im sure you’ve got records somewhere of how much i’ve played on beestation, ive always done well following the rules. are you really gonna permaban me for thos ONE time i messed up?

Not wanting to roleplay on a roleplaying server is definitely permanent ban worthy. You are literally not here for the reason the server exists.

As far as ban assignments go, I will not be the only admin reviewing it - it will only be processed after other admins have had a chance to weigh in unless you convince me otherwise.

ONE time i messed up?

You aren’t even reading what I’m saying if you still think this ban is permanent over OOC in IC one time.

over not roleplaying on a server that I thought was MRP

I thought was MRP

Medium roleplay. HRP/MRP doesn’t matter in this context, they are both levels of roleplay

I understand, but they are at different levels. Can we not at least agree a permaban for this one offence, which only affected at most me and one other person, is too harsh? I will attempt to roleplay better in the future, it seems I did not understand how high I had to have my roleplay at. I believed it was a a lot lower than it apparently was.

If you show no interest in RP on an RP server then the administrative staff of said server is liable to ban you until such a time as you show interest in RP. We don’t like guessing, thus, permanent ban and you can appeal when you’re ready to abide by our server rules.

Well I am, so can you unban me? I already have roleplayed a lot on Beestation. This was the only time this happened.

I already have roleplayed a lot on Beestation.

Do you have any specific, memorable interactions that you roleplayed here?

Given that there have been no further responses for a week now, I’m going to go ahead and lock this.

I already have roleplayed a lot on Beestation.

No, you really haven’t. I asked to give you a chance to defend yourself, but logs show that you rarely, if ever, interact with other players at all.