Here’s just a few suggestions for negative downsides for different mutations in the attempt to balance them or at least some forethought to be put in place before getting them:

Feel free to put constructive input on these suggestions, I’ll also mention that I was close to adding a weakness to Cryokinesis and Fireball. Though Fireball kind of sets yourself on fire and isn’t super common, Cryokinesis isn’t even picked that often and beside it doing a bit of damage to someone it’s only dangerous to those hit by it in space wearing a hardsuit/people wearing armor.

Hulk could also make you visually (as in your sprite) larger, so it’s harder to hide it until it’s too late. Sneaky geneticists often put on a gas mask or bio hood so people don’t notice.

when examined, have text such as “their clothing appears to barely fit and be slightly torn”

Hulk
When you suddenly have a larger and stronger body, shouldn’t that also require more food? As a hulk, you will have to consume food much more often.
Edit: Also makes your sprite bigger, and when examining the person you’ll read: “their clothing appears to barely fit and be slightly torn”.

One way of balancing hulk could be to make it require you to be very sad, give hulks a permanent mood down like they already do+ add a button that temporarily makes them a bit sadder allowing them to enter hulk mode, when you start being happy you exit hulk mode and get knocked unconscious for some time directly proportional to how long you’ve been hulked out for (maybe square root of every second as hulk?)

hulking out requires the mood of “I want to die!”

I used to play an old sourcemod called “dystopia” that had a hard counter to it’s thermal vision - Cold suit that made you invisible to people using thermals, even if you had a direct line of sight normally.

I really like that idea, as it could give people an option to completely hide from people if their body is below a certain temperature, making thermal vision a tradeoff, and not a direct upgrade.

another nerf to thermal vision could be that you could only see IF someone is behind a wall, you only see a red blob like seeing trough an infrared camera

At that point just make thermal vision manage with tempratures, visions like that are far too obnoxious if you never alt clicked any eyewear to toggle colours (DONT DO IT)

That can easily be abused, you’d just have to have the family heirloom trait and toss out the heirloom, boom almost constant hulk.

I still like the idea though, shooting space drugs at a hulk to calm them down.

You just made the fat gene like someone wasn’t gonna mass inject people with it! WE’RE DOOMED!!!
In all seriousness, if this gave you the fat trait, easiest assassinations of a traitor’s life. Just get a mutation of this and sugar cubes, done.

I mean for it to just slow you down, not making you fat. If it made you fat I’m sure stuff would have to be recoded to let you eat or you’re now immune to hunger/bypass some of the other weakness I’ve proposed for genetics.

Kero wishes more than anything that the power ceiling of combined mutations was lower, rather than the power of individual mutations.

Kero thinks this can be acheived in a simple way:

Kero believes this solution best preserves the fun of existing traits without a need to nerf them directly, and he also believes this will dramatically improve engagement between other crew and genetics staff.

Injectors should be adjusted so they may only carry one mutation at a time, lest it be too easy to grief with immediate genetic instability in one syringe.

I wanted to point out to Kero that you can’t make a advanced injector syringe that would be able to grief like that directly. If they already have a mutation the syringe doesn’t have then yeah you’d be able to but still you would need to set up that your victim already has a powerful mutation AND you are able to disable them long enough to inject the syringe.

I like most of what kero has mentioned and wouldn’t mind those changes, but it doesn’t solve the issues of how powerful mutations are. While it’s great that now people can only have one mutation out of their DNA, you are still stuck with the entirety of sec jumping on heat vision immediately and such. Even with requiring combinations to unlock these mutations it won’t solve the problem in the long run, and I think my suggestions also helps deal with stacking powers as you have to handle multiple different downsides that would really hamper a insulated, space adapted, hulk.

While it’s great that now people can only have one mutation out of their DNA, you are still stuck with the entirety of sec jumping on heat vision immediately and such.

Decide which current mutations are too strong to be single traits and make them part of a combination.

Kero thinks this is one such mutation which fits the bill for “too strong for single trait” and should be turned into a combination trait. As a combination trait, it will only be available if one half of the combination is already present as a latent mutation within a given security officer’s DNA (or anyone else).

Kero believes most other mutations listed in your first post fits this bill as well. Those mutations which are extremely powerful and gameplay defining should not always be available to each person, but only to a person who is both lucky and has directly engaged with genetics (or at least brute forced with activators to see what they have).

Okay I think I’ve misread and misinterpreted something, what exactly do you mean by undergo genetic testing? I’m just now rereading and here is my interpretation of your suggested change: I have found this mutation in person A and I have it stored, I now much redo the gene in person B to see if they also naturally have the mutation from person A.
I was about to type up my personal disagreement with this idea but I wanted to double check I’m interpreting this right.

Kero apologizes for confusion he has caused and will attempt to explain better, he may also be somewhat mistaken in how genetics works as Kero has not played it much, only observed the results of a great geneticist at work. 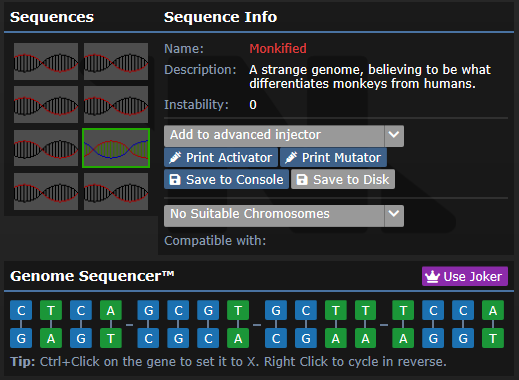 Kero believes each person has 8 “latent” mutations which must be activated. One of these is the monkey gene and this leaves 7 potential mutations that may be brought out either via an activator (geneticist has already discovered mutation and has unlocked them) or by manually sequencing the broken pairs on a specific individual. Kero knows none of these latent mutations will cause genetic instability regardless of what they are. This is currently how genetics works and Kero is not attempting to change this.

What Kero wishes to change, is removing the ability to inject more than one “external” mutation, which would be any mutations not currently latent within a person’s genome. Attempting to do so should result in immediate genetic instability which, unless mutadone is applied, should result in the death of the person. Currently players may stack quite a few external mutations and Kero believes this to be the true issue.

Kero presents an example of how this would functionally work:

Alexandra Mcloskey arrives in genetics as a volunteer to be examined After being examined it is brought to light that Alexandra has the following mutations latent within her genome: Monkified, Epilepsy, Coughing, Glowy, Nervousness, Insulated, Two Left Feet, Gigantism. Alexandra wishes to be empowered as a hulk, but alas, her natural genome contains neither Radioactive nor Strength; Alexandra is incompatible with hulk and it is impossible for her to acquire without becoming genetically unstable. Alexandra is however able to get the shock touch mutation due to the presence of Insulated.

Finally, Kero suggests ensuring every genome has access to at least one half of a greater positive mutation. This ensures every player will have one powerful genetic option, but does not ensure access to a specific one they may want. Kero believes this preserves the spirit of genetics by ensuring it can do something great for everyone while solving the issue of people rushing specific powers en masse or specifically suited to power-gaming their department.

Here’s something I don’t get, why the geneticist can’t just fully remove/swap/splice out genes entirely?
Yes, if we’re following the options of balancing proposed by Kero, then this would effectively nullify the limitation of “Only one additional mutation” deal, but locking this sort of stuff behind tier 3 or higher tech sounds like a reasonable pre-requisite for all of the OP stuff.

I feel like reducing the effectiveness of the portable DNA scanner and putting more emphasis on the actual sequencing pod/machine just sounds like a good way of limiting the speed at which genetics acquires new genomes/mutations.

Aditionally I think the way genomes can be so simply found by throwing a humanified moke into the DNA machine to be rather cheap, a way I believe to remedy this is by having any non-player controlled character yield only “experimental mutations”, which dependant on the power of the mutation have adverse mood/health effects, perhaps taken from the pool of ideas suggested above, this can be alleviated by some how using a second player to gain the stabilized/perfected gene.

additionally perhaps having to tailor any genetic modifications dependant on their source to be compatible with other species also just sounds right. if you found the thermal vision genome from a lizard person, then when you want to put it into a moth/human/grod, you have to do a tad of additional modification so that the genome doesn’t cause cellular rejection since it was derived from a different species that round.

Kero continues from the above with a proposed expansion to genetics:

Anti-Glow - change to be a standalone trait instead of requiring a combination. Kero believes this to be a relatively useless mutation by itself, both from a positive and negative aspect, but it has great potential if distributed alongside Shadow Mutation Toxin (This requires collaboration of Chemistry, Xenobiology and Genetics as well as access to Holy water from Chaplain or Cargo)

Night vision - (Moths?) Gives you a toggle ability to see completely in the dark, but makes you more susceptible to blindness from all sources. Mood boost when in well lit areas.

Tetrachromacy - Functionally does nothing (Tetrachromacy is the ability to see an additional primary color - this is an impossible concept for many to wrap their head around but it is the opposite of colorblindness and would allow seeing a myriad of new, unimaginable colors)